Home Blog PR Where do you turn for reputable news in 2013?

Where do you turn for reputable news in 2013?

Friend and colleague, LuAnn Gluwacz brought up an interesting question on Facebook a couple weeks ago: If you were to cite REAL news these days, what would you consider the best source?

The answers varied—greatly. Take a peek. 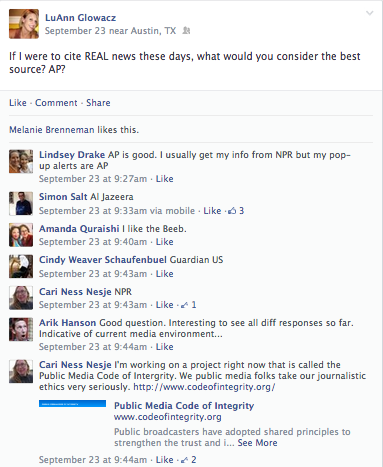 And I had to cut off the list for the sake of this screen grab. There were more outlets listed.

Would all of those media outlets have been listed 10 years ago? Probably not, right? But I think it’s interesting to see outlets like Al Jazeera and the Guardian slip into this discussion.

But that was LuuAnn’s post. I wanted to do my own research (and I use that term loosely for purposes of this post :), with a bit of a twist. So, I asked a number of fellow PR pros where they went for reputable news sources throughout the day. Here’s what they had to say:

Mashable, CNN and NBC News (via desktop and iPhone)

So, I surveyed 10 people and asked them for their top three news outlets they visit on a daily basis. They came up with FOURTEEN different sources.

You start to add in emerging sites like Now This News and Buzzfeed and that number is only going to grow in the months and years ahead.

The implications for PR? When citing hard news, there is no “one source” that stands out above the rest (like AP or the New York Times probably did at one point).

In today’s fragmented media landscape, trust is media is all over the board. One person may trust the Washington Post. Another may abhor them.

And, as we move toward an increasing reliance on mobile devices for our news, I think that may shift even more (see note above about Now This News and Buzzfeed, who seem to understand the mobile experience a bit better than some more traditional outlets).

What about you? What media outlets do you visit on a daily basis? Which media do YOU trust?