When will the emoji marketing madness stop?

Yeah, I know. Emojis are everything.

I know it’s how all the Millennials of Mother Earth communicate.

I know brands want to appear “hip” and “on fleek.”

But haven’t we all taken this just a bit too far? 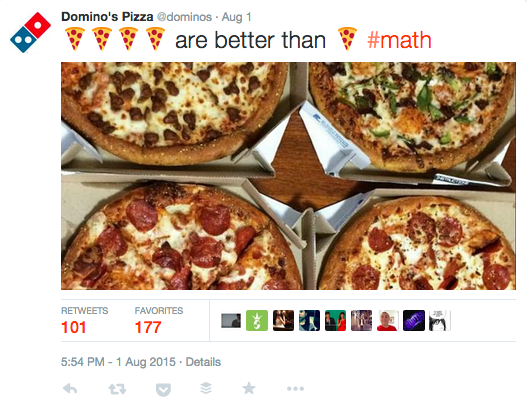 I mean, Chevy created an entire news release in emojis earlier this year. A NEWS RELEASE. A tool that is typically one of the most buttoned up documents littered with corporate jargon and buzzwords used EMOJIS to communicate. Of course, one could argue it was all part of a publicity stunt to drive interest in a new car (I blogged about Chevy’s approach a while back, if you’re interested).

You can order pizza via emoji thanks to the folks at Dominos.

I know the rationale. I get it. Younger people use emojis to communicate words in a visual format. It’s easier. It’s “cool.” And, for businesses, it’s a way to endear themselves to these younger audiences.

For some brands, I get that this approach makes sense. Taco Bell, for example. I’m with you. Pizza Hut even. Sure. Comedy Central, even.

But, Goldman-freaking-Sachs? Yeah, here’s what they posted on Twitter earlier this year. 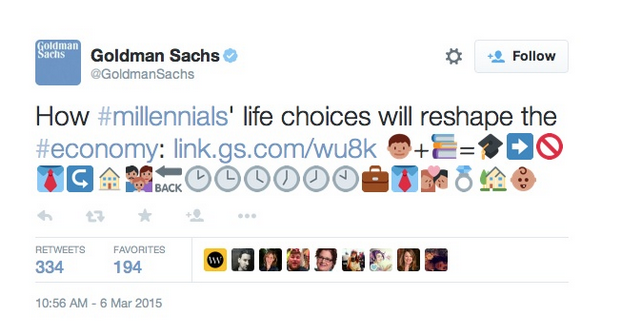 I’m sure the argument is that Goldman Sachs is recruiting younger talent. They need to speak their language. They need to appear keen to the needs and lexicon of the 25-year-old Stanford grad.

But, you know what I see? Desperate brands.

Brands looking at the short-term game instead of the long-term play.

Brand that are so desperate to connect with younger audiences they’ll do virtually anything.

Like creating an entire news release out of emojis.

Here’s my take. Sure, communicate with your audience in a way that makes sense for both sides. But, don’t do it at the expense of your overall brand.

And don’t do it just because your competitors–or other brands–are doing it.

Finally, don’t do it because you saw an article on “emoji marketing” (oh yeah, that’s a thing) on Digiday. Marketing fads seem to change and shift by the week these days.

Here’s a thought: Maybe you don’t even use emojis at all.

What a radical thought.