I saw a short message from friend Heather Whaling this past weekend. It read: 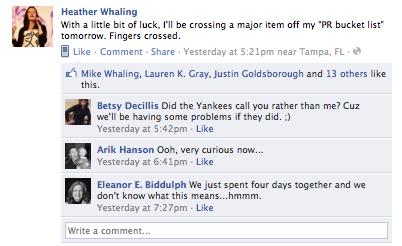 Turns out that bucket list item was this (congratulations, Heather!): 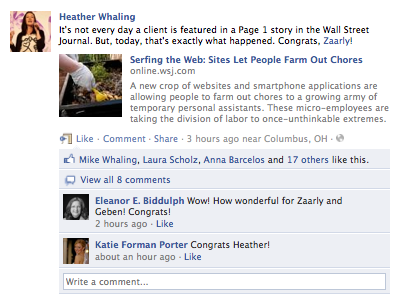 That got me thinking. I’ve had a personal “bucket list” for years. Among the items on that list:

* Living in a small, quaint villa in St. John in  the USVI at some point in my life

* Visiting Australia, New Zealand and Norway (and other parts of Scandanavia) before I leave this Earth

The list is much bigger, but that gives you a flavor.

I’ve put a lot of thought into that list over the years. And I’ve even been able to check off a few items already (becoming a father, visiting Hawaii, for example). But, as great as that list is, it’s purely a personal list.

I’m officially starting my PR bucket list today. And, because one of the best lessons I’ve learned along the way is to “always share your dreams” (you never know who might be there to help at some point), I’m going to share with you my initial stab at mine (at least as of Nov. 30, 2011).

Here goes (in no particular order):

* Help a craft brewery launch a new beer and attend the Great American Beer Festival (I’m convinced this one is attainable).

* Advise a major league sports team (preferably in professional baseball or football) on PR/communications/marketing issues (or, as an alternative, advise a PGA TOUR player in the same way)

* Sit on the boards of at least two non-profit organizations in areas I’m passionate about by the time I’m 50 (gotta get crackin on this one–only 11 years left!)

* Help out (maybe even volunteer) to help the media/PR team for a future Ryder Cup event (this is a definite possibility as the Ryder Cup is coming to Minnesota in 2016!)

* I also want to add a bucket list goal around my blog, but I’m not quite sure how to frame that–any ideas?

So, that’s the start to my list. I’m sure it will change over time, but it’s a good start for now.

What about you? What’s on your PR bucket list?