I was rather late to the party, but I finally got around to watching all five seasons of Friday Night Lights earlier this month. Not sure what took me so long. Friends Jeff Shelman and Ryan Mathre had been recommending it for some time. But, I once I clipped the cable cord, Netflix became my new best friend. And, I started rifling through FNL episodes. 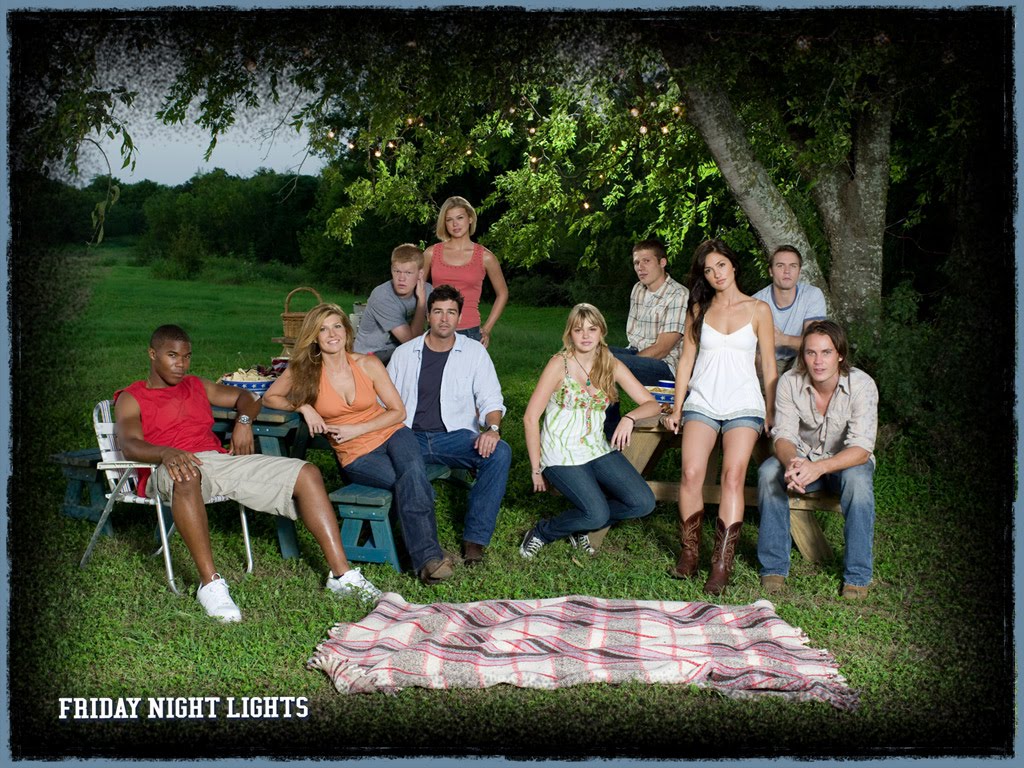 The fantastic show had me hooked from the get-go. Great writing. Decent acting (not great, but passable). And, tremendous plot lines (especially in the final season). Without a doubt one of my favorite shows of the last five years on television.

But, like most smart shows on TV, this one came to a sudden end. It makes sense, actually. I mean how long can they reasonably produce a show where the characters move on almost every year (seniors graduate, then we don’t hear from them again–college isn’t nearly as interesting as Dillon, Texas after all 😉

One of the best parts of the show was the characters–I’m sure most would agree with that. You had the stud quarterback (Jason Street and later Matt Saracen and Vince Howard). You had the gorgeous cheerleader–Layla Garrity. You had the beautiful, under-achieving girl–Tyra Collette (my favorite, by the way). You had the geek–Landry Clarke. You had the guy who drank too much, who also got all the ladies (Tim Riggins). If you went to high school, you could identify with at least one character on this show.

But, I also found these characters could teach us a thing or two about PR. Yes, I just made that connection. And yes, Minka Kelly can teach you something about PR. Let me prove it to you.

What he can teach us about PR: Be ready for curveballs

Life was cruel to Jason Street in the first season of FNL. He was paralyzed. His girlfriend cheated on him. With his best friend. But, dealt that brutal hand, Street perservered. In fact, he ended up thriving by the end of the show (full-time agent working in NYC). In PR, we’re constantly dealt curveballs in our work. A client who changes direction at the last minute. A reporter who ends up not running the story you pitched. Whatever the case, it pays to be ready for these curveballs–and to create a plan B on the fly. Worked for Jason Street–it can work for you.

What he can teach us about PR: Inspire teams by your actions AND words

I can’t remember how many times I choked up listening to Eric Taylor’s speeches on FNL. He was probably my favorite character. I can identify because I played for a few coaches like Taylor when I was younger. But, his words (and delivery) hit me. Heck, they motivated me and I was sitting on a couch watching the show. Remember that your words and actions make a difference each day–with your clients, your colleagues and your managers. You have the power to inspire each and every day.

What she can teach us about PR: Support your teammates

There’s a common phrase in the coaching world: Behind each great coach is a great wife. Or, something like that. The point? No great coach succeeds without a doting wife who’s supporting him through it all. And, that’s exactly what we saw in FNL. Tami Taylor supported her husband through all the crap he dealt with–changing teams, getting fired, being recruited when he didn’t want to be. You name it. In the workplace, supporting your teammates is kinda table stakes. Yet, we don’t always see it, do we? Instead, we see back-stabbing. Information hoarding. Bullying. Don’t be that guy. Be the guy who stands shoulder-to-shoulder with his teammates. Be that guy who’s  your colleague’s biggest fan. It’ll pay off down the road–and you’ll feel a whole helluva a lot better about yourself.

What he can teach us about PR: Don’t be afraid to follow your dream

Matt Saracen was probably one of the characters who changed the most during the course of the show. From back-up QB, to QB1 to state champ to college student in Chicago to the guy who married Julie Taylor. But, he only got to Chicago (and proposing to Julie) by following his dream–art. In your career, you’re undoubtedly going to run into people who tell you that you can’t achieve your dream–for a variety of reasons. Don’t listen to them. Hear them out–and respectfully disagree. And, then use their doubt to motivate you to achieve your dream. Don’t ever stop chasing your dream. Ever.

What he can teach us about PR: Stick to your moral compass

Remember the series of episodes where Landry hit the guy who was attacking Tyra and ended up inadvertantly killing him? He was so guilt-ridden. His morals and ethics were getting the best of him. Things turned out OK for Landry in the end, but what about you? How’s your moral compass? Because in the world of PR, ethics are everything. Do you disclose client relationships when sharing on Facebook and Twitter? What about conflict of interest situations? Issues with fellow employees and managers? How have you handled those in the past? With a strong moral compass–and a general want to do the right thing–you’ll usually be just fine.

What she can teach us about PR: Believe in yourself, and your gut

Besides being the cutest character (by far! but, only with the blonde hair ;), Tyra was also mired in mediocrity and troubles for most of the seasons she appeared on the show. That was, until she ran into Landry and Tami Taylor. Ever since, she started to believe in herself and her life was never the same. In PR, much like other facets of life, confidence is everything. With it, you’re invincable. Able to conquer the world. Without it, you start second-guessing everything. Nothing feels right. But, at the heart of that confidence is a firm belief in your abilities. Some days, you’re going to get your butt handed to you. And it’s not going to feel very good. But, if you continue to believe in yourself, those days will be easier to handle as time goes on. Stay true to yourself–and what you believe.

What he can teach us about PR: Play like you always have “two strikes” against you

Loved the quote he had in season 5. It was something like: “I’ve had two strikes against me my entire life.” The point? That he played with a carefree, nothing-to-lose spirit that only someone who’s had the deck stacked against him could. Adopt that mentality. Work like you’ve got two strikes against you. Work (and play) like you have nothing to lose. You’ll feel looser. You’ll work more effectively. And, most importantly, you’ll give it everything you’ve got. Every day.

What he can teach us about PR: Always show respect

Did you ever notice Luke always addressed every adult in FNL with a “yessir” or “yes ma’am?” It’s true. Luke was the most polite character on the show. And you know what? That’s a lost character trait of late. You so rarely hear people addressed as “sir” or “ma’am.” The bigger lessons here is to show respect–not only for those who might be your senior, but also to colleagues your same age and younger. Age shouldn’t really matter. Respect should.

What he can teach us about PR: Don’t party the night before a game–or pitch

How many times did we see Tim Riggins hungover at practice? Virtually all the time, right? I mean the guy almost always had a beer in his hand when he wasn’t on the field. And, many times, it impacted his performance on the field. Don’t let that be you, in the professional sense. Stay away from the drinks the night before a pitch–chances are, you won’t perform as well. In general, you need to be on your A-game for client meetings and pitches (just like the games Riggins was playing in)–so a good night’s rest, instead of a case of beer, is a better recipe for success.

Any FNL fans out there? What PR lessons did you take away from the characters on the show?