Earlier this week, you may have heard about the most recent kerfuffle retailer Target found itself in (yes, again). This time, Target’s culture was the bullseye. A former employee went off to Gawker (classy move, by the way) and vented.

One day later, Target CMO, Jeff Jones took to LinkedIn to share his views, and basically respond to the Gawker article. You can read the full post here. (Side note: Yesterday, Gawker published yet another article responding to Jones and yes another disgruntled former employee (again, high road–nice). 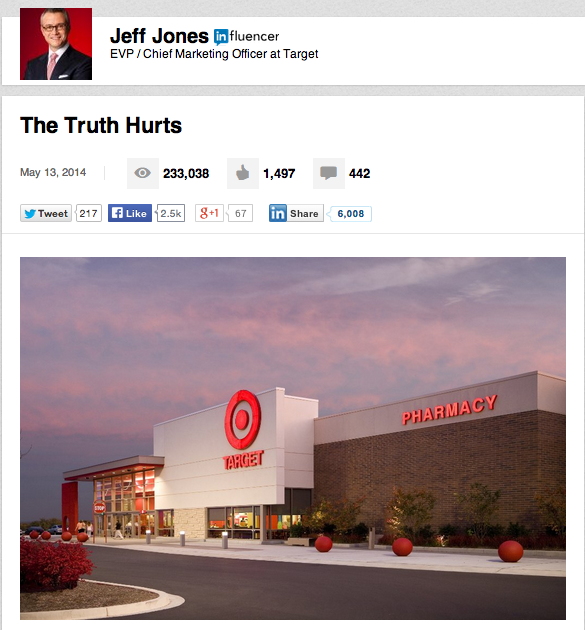 The post clearly struck a nerve with folks. 163,000+ view. 2,100 likes on Facebook. And more than 300 thoughtful comments (most were positive, by the way). People defending Target and Jones. People attacking Target. You name it–it’s in the comments (although I should say, most of the comments I read were fair and above board–unlike the comment streams you see in media articles).

But, what I thought was most interesting about this whole scenario was this: Jones posted this all on his own.

No corporate hand-holding from the PR team.

No approval (seemingly) from his fellow executives (this, according to an article in the Minneapolis Star Tribune on Thurs).

Potentially no heads up at all.

If you’ve worked as part of a corporate PR team (I spent 10 years working on the corporate PR side), you know how out-of-the-ordinary this is.

Add in the fact that we’re talking about Target–one of the biggest retailers in the country–and it gets even stranger. Not to mention, it’s an organization coming off its biggest crisis in the company’s history and a CEO who was just forced out.

But, there was Jones. Crafting and posting a big message on a public social network for all to see.

A number of questions come to mind.

Why did Jones choose to respond? He was actually lauded in the initial Gawker article.

Why did he choose LinkedIn as his platform of choice?

Why did he decide to completely circumvent his fellow execs and the Target PR team?

Why did Jones decide to post all on his own?

Why did Jones decide to make the post to LinkedIn, all on his own? It’s an interesting approach–and one we really haven’t seen much of from execs and big organizations. Especially one like Target going through the pains and struggles it’s currently experiencing. A CMO with a Fortune 100 company in crisis essentially going out on his own to deliver a major message in a time of turmoil. If you’ve worked on the corporate side in PR, you know how big of a move this was.

Typically in these types of situations, the corporate PR team would help the exec write the message–many times, they would pen the entire thing and merely get a sign-off from the exec. In this case, from what we can tell, Jones was all on his own. No corporate approvals. No buy-in from his colleagues. No nothing. Just Jones posting a major message (on behalf of the company, really) on LinkedIn. Big-time cowboy move–but, I tend to think it paid off for that same reason. You see, by doing this all on his own, and NOT going through the corporate machine, Jones avoided watering down the message by putting it through its approval paces (which was sure to happen, given Target’s prior communications). By doing this on his own, it gave Jones the leeway he needed to be much more personal. To be unfiltered. To be himself. And in this case, that’s really what was needed . A stiff, corporate message wouldn’t have played the same way. Employees, shareholders and customers needed to hear it from a real person. Jones delivered.

Why did Jones choose LinkedIn?

Why the decision to publish on Linked vs. any number of other outlets (including their great Bullseye View blog, which they used as a platform throughout the financial crisis)? This one’s actually pretty easy. Jones is an “influencer” as defined by LinkedIn–and he does have some 9,000 followers. Even though that’s child’s play in the context of big corporate execs (Virgin’s Richard Branson has 4 million-plus followers, Likable CEO Dave Kerpen has 370,000-plus followers), it’s still a big factor. And obviously, we all know LinkedIn is the professional social network, so it makes sense from that vantage point, too. But maybe the biggest reason Jones chose LinkedIn (me speculating here) is that it’s a publishing tool he could use that didn’t require him to go through official Target channels (like the Bullseye blog would have). Translation: Jones could write something up, hit publish and it would be seen by hundreds of thousands of people within 24 hours (which is pretty much what happened)–without having to get a single “approval” from HQ.

Was his message effective?

The most surprising part about this whole situation? The tone and style of the message. Jones’ message was much more personal and less “corporate-y” than previous messages we’ve seen from the Target camp–especially as of late. I thought the message came off as honest, open and, to an extent, vulnerable. I mean, just look at the title (“The Truth Hurts”). Heck, look at the first line of the post (“To say that the last five months at Target have been difficult is an extraordinary understatement.”). Then, take a look at this paragraph:

In reading this account of life at Target, I’ve gone through a range of emotions – first anger, then wondering why any team member would say what they said. And while it was difficult for me to read this account for many reasons, the reality is that our team members speaking with honesty is a gift. Because much of what they are saying is true. While we would have preferred to have a conversation like this with the team member directly, speaking openly and honestly, and challenging norms is exactly what we need to be doing today and every day going forward.

Jones is essentially admitting that much of what this person said on Gawker is true. He’s not refuting it. He’s not calling anyone a liar. He’s not calling out Gawker. He’s owning up to it. Full on. When was the last time you heard a corporate executive do that?

Let’s read on. Here’s what Jones had to say later in the post:

The culture of Target is an enormous strength and might be our current Achilles heel. In the coming days and weeks we will embrace the critiques of Target, — whether it’s from outsiders or our own team — like an athletics team puts the negative press on the wall in the locker room.

Again–taking the criticism head on. And, like I said at the outset, Gawker had another attacking email from a former employee yesterday. I’m sure it won’t be the last. But again, here’s Jones, saying, effective, “Bring it on. We’re listening.”

What’s really interesting is this: Do you think Jones would have been allowed to post this message if he would have went through the proper channels within Target? Now *that’s* a very interesting question.

But overall, there’s a lot to like in Target and Jones’ approach here. But, as they say, the proof will be in the putting. A message is just that–a message. Ahead lies the hard work for Target–transforming a culture that is clearly in need of repair. Whatever you think of Jones’ response, the big red bullseye obviously has a long, tough road ahead.

Back to the initial question: Was Jones’ post a cowboy move, or brilliant communications strategy?

I think it was a little of both. You?