If you’re a sports fan, you probably remember those Nick Bakay Tale of the Tape segments on ESPN where he’s pit one team, mascot, segment of fans against another in a “vs”-type scenario (here’s an example). It was 10 percent serious, and 90 percent comedy, but at the end of the segment he always had a winner. They weren’t always the funniest comparisons (with the exception of the mascot Tale of the Tape between the Stanford Tree and the Cal Bear–that was one of my favorites), but I liked the way he set up the segment and I loved his patented “advantage–push” phrase. 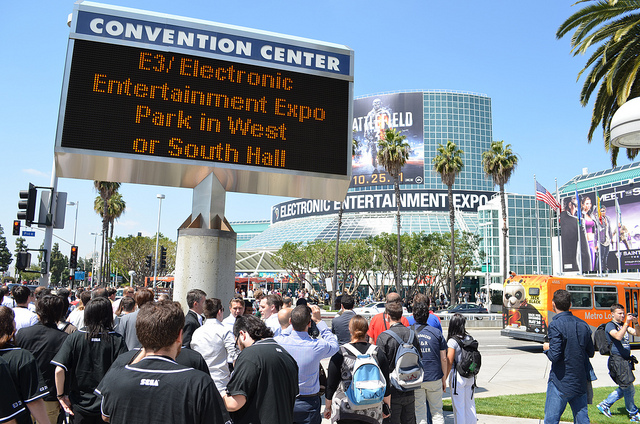 So, I thought I’d completely steal Bakay’s approach and use it for an event I’m very excited about this week (Disclosure: I co-organize the Social Media Business Summit track and I’m speaking this year): BlogWorld.

This year, for the first time, BlogWorld is moving from Las Vegas (which had been its home for the last several years since its beginnings) to La-La Land. So, why not compare and contrast the two venues? While the content in LA looks to be fantastic, I want to focus more on the “intangibles” around the event–those factors that round out your BlogWorld experience. So, let’s break it down: Vegas vs. LA.

I’m just thinking about the clubs where BlogWorld parties have been held in the past. Many of which have felt like big-time, big-city clubs. With a mix of summer flair–remember the closing BlogWorld party a couple years ago poolside at the Hilton with the 100-foot Barry Manilow mural? LA will most likely offer more of the same in the downtown area around the Convention Center. Just look at the line-up of official BlogWorld party sites: ICON LA Ultra Lounge, J Lounge and The Belasco. LA should be pretty solid, but damn, I’m going to miss Jason Falls annual Slushie-Bar Party.

Advantage: LA (for the change of pace)

I haven’t flown through LA in years, but flying in and out of Vegas is always a relative breeze. Easy in, easy out. Very few weather delays. And very few delays period in my limited experience. LAX is a west coast hub airport, so it’s obviously going to have a heckuva a lot more traffic than McCarran. Also, one of the biggest perks of McCarran for BlogWorld visitors? FREE Wi-Fi! Doesn’t look like LAX offers the same perk.

Vegas is a city based on tourism–especially on the strip (where BlogWorld was basically held). So, you’re pretty much exposed to all tourists during your visit. LA will be much different. Sure, there will be some tourists, but we’ll also get a heavy dose of “Hollywood types”–actors, writers and producers and those aspiring to hold those positions. Plus, it’s LA, so we’ll undoubtedly see our fair share of folks who are far more concerned with style than substance. You’ve seen The Hills, right?

There may be no better sight-seeing city in the U.S. than Vegas. You have the casinos. You have the world-class shows. You have amusement park rides. And, of course, you have the people just walking around. It’s a feast for the senses. LA’s no slouch in this category though. The Hollywood sign. Many beaches just a short drive away. And, of course, many potential celebrity sighting opportunities. Tough call here.

Advantage: LA (just for the additional beach angle and the fact that LA has a bit more “soul” than Vegas)

What Makes the City Unique: The Strip vs. Hollywood

Sure, when at BlogWorld you’re usually eating at least two meals a day on-site or very close to on-site at the event. But, you usually have dinner options. So, that’s 2-3 meals in a feature city–a chance to see some of the better haunts that city has to offers. In Vegas, that largely meant the many restaurants inside casinos on the strip–which is actually a pretty impressive list. Vegas has come a long way in terms of upscale dining. On the other hand, LA will offer a whole different dynamic. Given the money of Hollywood (and just a big city, in general), fine restaurants shouldn’t be hard to find. Especially down by the Convention Center. And, given the melting pot that is LA, I’m guessing we’ll also find a wide variety of good food from different ethnicities as well.

By my math, we have a 3-2 margin for LA, with a one Nick Bakay push, which is good because I’m really looking forward to LA this week. New city. New opportunities. And, since I haven’t been to LA in more than 20 years, I’m looking forward to re-exploring the city a bit. So, while I will miss Vegas, the casinos, the shows, and Jason Falls Slushie Mall Bar party, I think most can agree we’re looking forward to discovering a new city for BlogWorld this week.