OK, I know what you’re thinking. He’s writing a post about a significant industry thought leader in hopes of landing a RT or share.

I would have been guilty of that charge…5 years ago. Now: I could care less if Jay reads this post (no offense Jay, if you do in fact read it).

What I do care about (and continue to be astonished by) is the way Jay creates, curates and distributes content on a daily basis–better than almost any brand.

In fact, I think brands could learn a TON from how Jay creates, curates and shares content. I mean, I’m sure he would love it if you would pay for him to tell you how to do this, but really, you could learn a whole bunch just by WATCHING what he’s doing.

More importantly, let’s look at the way Jay creates and curates content in as little time as humanly possible:

Get in your customer’s inboxes–DAILY 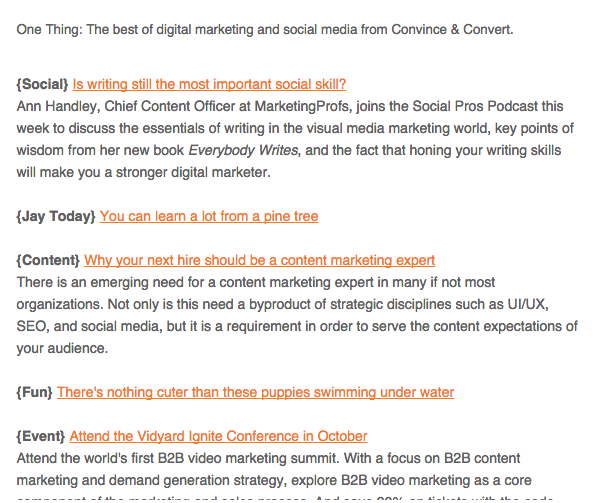 Jay’s “e-newsletter”–One Thing–is smart. He sends a daily email to subscribers that’s made up almost entirely by other people’s content. Oh sure, he sneaks in his own stuff–usually right at the top, but it’s usually full of 3-5 posts, events and reports/studies by Jay’s partners, friends or sponsors. This way, Jay is in front of you every day with useful and relevant content (sure, it’s a bit salesy sometimes, but he does a nice job of not over-playing that)–content that is mostly created by OTHER people. Many brands struggle to create content that would sustain a daily e-newsletter–but, like Jay, could you CURATE content to get that steady stream going instead?

Use EVERY SECOND of your free time to create content

Jay recently unveiled a new outpost to his content empire: #JayToday. It’s a short, three-minute video where he shares a quick-hitting piece of advice, and promotes a few sponsors. But, that’s not really all that ground-breaking on the surface. What IS smart about this approach though is how Jay is almost always (appears) to shoe-horn it into his day in some way, shape or form. So far, from what I can tell, he’s recorded these #JayToday videos from: a busy street in Fargo, an airport lounge, many conference rooms in whatever building he’s working in that day, and potentially his backyard. The lesson? Jay most likely didn’t have time to add ANOTHER content piece to his plate. But, he knew he could knock out these 3-minute videos no matter where he was, with the right technology (his phone). So, the next time that client tells you they just don’t have the time to create content, point them to Mr. Baer’s #JayToday series.

Create content where others do the majority of the work 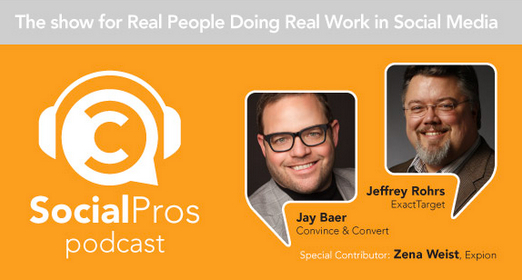 I’m very jealous of Jay’s “Social Pros Podcast”–mostly because I really wish I had come up with that idea first. So simple, but so brilliant (real pros doing real work in social). But, from a content creation point of view, what’s extra smart about the way he set the podcast up is his guests do most of the work. Sure, he has to find and schedule them. Sure, he has to craft a few questions for the interview itself. But, for the most part, the content the guests bring is the main attraction. I’m guessing Jay does maybe a half hour of prep for each show–that’s not all that much considering what he’s getting in return (awareness, and a chance to get to know all these guests he’s having on his show, who by the way, are all potential clients). Really, really smart.

So, I don’t want to hear that you’re too busy to create content. Everyone’s busy. The better response would be “content isn’t a priority for me.” Because believe me, if Jay Baer has the time to create a content empire like this–your client certainly has the time.