So, this isn’t necessarily a new discussion. People have debated which social network is best for job seeking, business networking and recruiting for years. 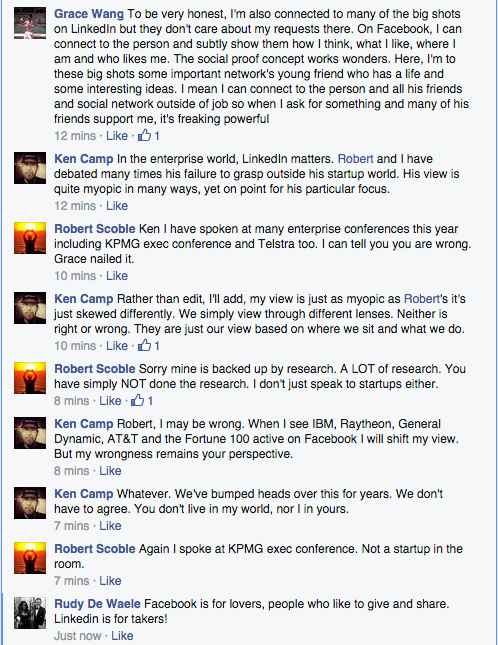 As you can see, tech influencer, Robert Scoble got involved, and as sometimes happens when he does, things got a little “interesting.”

People advocated for both sides, and made some good arguments, but Scoble defended Facebook. Vehemently. Citing research and evidence all along the way. 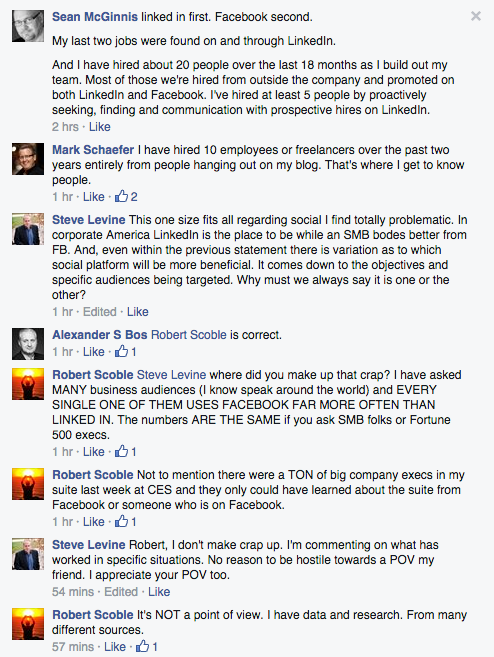 Now, for every person who says they sourced 10 jobs via LinkedIn, you’ll probably meet 10 more people who will claim they found a job on Facebook. But, let’s set that aside for a minute. We know both are useful, but ever since its inception, LinkedIn has HUNG ITS HAT on the fact that it is THE social network for business networking. It is THE social network, THE place to go to find a job.

And, now you have people debating whether Facebook may now be that place. That one place where people go to network professionally and uncover new opportunities?

When you think about it like that–that’s interesting, right? That’s certainly not the way it’s been positioned the last few years–not by the networks, or by most people you talk to.

Yet, there’s Scoble making that claim right in the thread. And, he’s making it and citing he has research to back it up (we’ll see, I guess–he doesn’t share that in the thread).

Here’s my take on all this. Facebook is still THE social network. It has the users. It still has the majority of people’s attention. It is THE place people hang out online. At least, from a mass population perspective.

And, through all that time we spend on Facebook, relationships are nurtured. New people are met. And, all that “networking” and getting to know you, can (and most likely does) lead to new opportunities. After all, you can get to know someone a lot better on Facebook than you can on LinkedIn, right?

However, it’s a much more closed network. A lot of people still want their personal and their professional worlds separate (read: Facebook vs. LinkedIn). They don’t want to mix those two.

But, for those using Facebook as a networking tool, I could certainly see those personal relationships driving new opportunities. It’s probably not a direct line of sight, but it starts and ends with the relationships you’ve developed and nurtured on Facebook.

On the other hand, you have LinkedIn, which has become a recruiter’s rolodex. And, let’s face it, that’s really what it is at this point. Most people only use LinkedIn when they have to–when they’re looking for a job, need to update their profile, and connect with a few new people. They’re not on LinkedIn every day. They’re not connecting with new people each day there. They’re not sharing details of their lives.

They’re merely using it as a job-finding tool. Period.

Add to that the fact that LinkedIn is littered with garbage. Recruiters. Real estate agents. Tons of garbage content (thanks now, to LinkedIn publishing).

People complain about the Facebook algorithm, but if you spend any amount of time on LinkedIn, you know that experience isn’t exactly perfect either.

So, Scoble’s notion that more people are using Facebook to find jobs and opportunities starts to make sense.

But, here’s the thing: It’s not an either/or scenario. It’s BOTH.

For example. I use Facebook the way most people use it. I post pics of my kids, my life and the beers I’m drinking. I DM with friends and family. But, I also use it to keep in touch with professional friends and people I know here in town. I’m friends with a lot of people I know–but don’t know all that well. From a “new opportunities” perspective, you could say I use Facebook to bring these people closer to me. To allow them to get to know me a bit better. And, it’s a way for me to get to know THEM a bit better, too.

I use LinkedIn, on the other hand, to build my official professional network and resume. And, I use it to keep tabs on people and their new jobs and promotions. I send DMs regularly to new connections and friends, congratulating them on new jobs. I use it to re-publish my blog content, so there’s a thought leadership angle, too. But, it rarely leads to new business. In fact, neither Facebook or LinkedIn lead to much new business.

But, they’re both very, very powerful in the way they allow me to nurture relationships with friends, colleagues and clients.

And those people are all referral sources.

And that’s how you get jobs, folks.

So, the answer to the question in the headline is simple.