Not THAT FML. In this case, Jello’s campaign is dubbed “Fun My Life” and it’s obviously having a little fun with the #FML hash tag and acronym that’s become so popular among texts, Twitter and everything in between (if you’ve never heard of FML, Google it–I don’t want to share profanity in this post).

But, as I looked into the campaign a bit more, I wondered: Is this a brilliant marketing move to play off a wildly popular hash tag/phrase among a younger audience that may not be prime Jello consumers just yet? Or, is it a completely bone-headed move in an attempt to hijack a hash tag on Twitter? 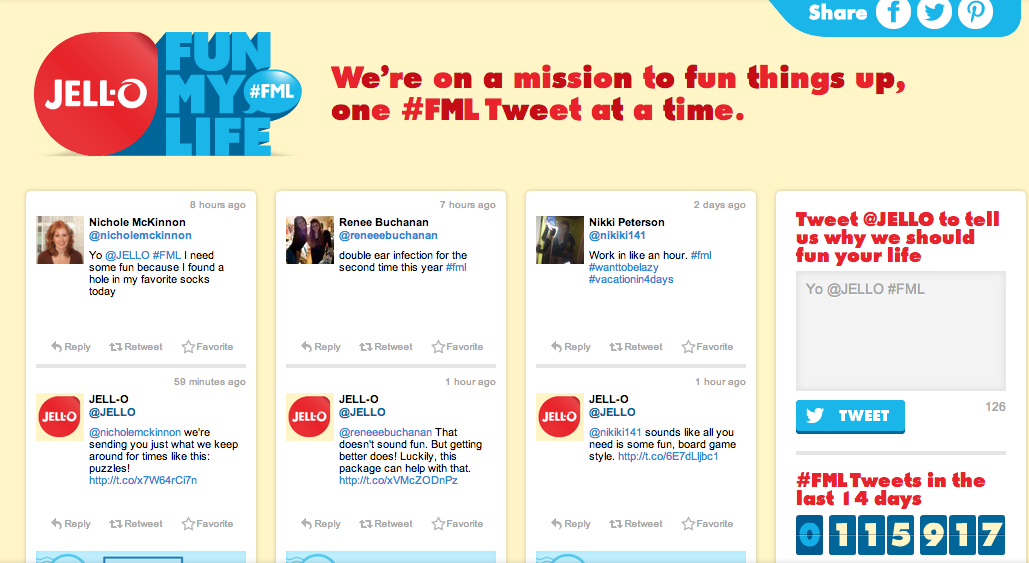 I’m leaning toward the latter. Here’s why:

Associating your brand with “FML” is a risk

That’s an understatement. Even for the most risk-embracing brands, the decision to proactively affiliate yourself with an acronym/hash tag that includes vulgar language is a risk. A BIG risk. In terms of reputation management, I’m not sure this is the best move, but time will tell how this plays out.

How do you measure success?

Since the #FML hash tag is SO prevalent on Twitter (and other social networking sites), how on earth will they track this? I mean, they can’t count ALL the FML references as mentions, right? How do they discern between those that “count” and those that don’t? I know they can look at the actual replies and sift through things a bit more easily using some paid measurement tools, but this seems like they’re climbing an uphill battle from the beginning to me.

How will consumers respond once Jello has engaged them?

The idea of the campaign is simple: Respond to people posting about the real #FML hash tag and give them something to laugh about. In essence: Fun their lives up a bit. I get it. But, I’m not sure consumers will. And, I’m just not sure how they’ll react. So far, it’s been a mix. Some are surprised by the response and react positively. Others have not. I just think they might be setting themselves up for some unwanted discourse here… (keep in mind, the people talking about #FML are not exactly in the best mood)

It’s an awful lot of effort for…

I’m just not sure what the payoff here is for Jello. Mentions? Volume? I guess. But, from the outside looking in, it seems like a whole lot of effort (and money, I’m guessing, judging from the fact that Crispin Porter + Bogusky is their agency in this instance) for a smaller payoff. I mean, I’m sure Jello has a team of folks staffing the responses to these tweets. And, someone’s developing all those pieces of artwork they’re sending people. And someone designed that micro-site. That’s money. Lots of it. I’m just wondering if the effort is worth it, that’s all.

Everyone who tweets #FML registers for the sweeps?

That’s right–according to Jello, anyone who tweets the #FML hash tag between now and June 14 will be entered into a giveaway for For My Life prize packs “specially created to get their lives back on track”. Um, what? So, ANYONE who uses the #FML hash tag is entered–whether they even know about this campaign or not? That seems to be the case, but I hardly believe it’s true. Typically, when companies run sweepstakes, they’re looking for their target audience. They want to use the sweeps as a lead driver. Now, oftentimes, they don’t get all people from their target audience to register since there are a number of deal-seekers out there. But, this just takes that to a whole new level. Again, I’m just not sure the payoff is worth all this effort (and it’s not exactly precise).

I’m not saying this is the worst campaign in the history of social media marketing. Far from it. I do, actually, like the fact that they’re taking a risk. Doing something different. And, I like the idea of flipping #FML on its head a bit. But, there’s too much here that has me scratching my head.

What do you think? Brilliant campaign or bone-headed move?