About five years ago, I made the tough decision to not renew my PRSA membership.

It was purely a business decision. I was on the board of directors at the time. I was on the executive track, in fact. But, I was starting my business at the time, and felt my time would be better spent on getting my new business off the ground.

So, I told the board I was stepping down–and why. And, I let my PRSA membership–and my APR designation–lapse.

I focused on starting and running my business.

I focused on my young family. 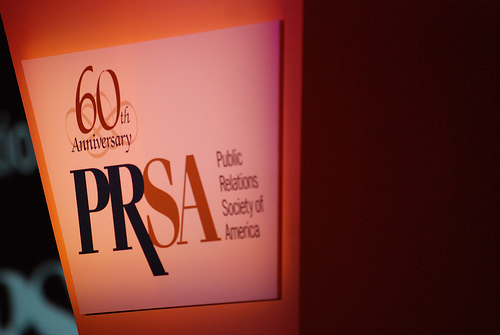 And, a couple years ago, I re-inserted myself in a different professional organization in town: MIMA.

This was not a spur-of-the-moment decision–but one I made with a lot of careful thought.

For me, MIMA just made sense–for a number of different reasons:

1–Learning. I’m working more and more in the digital marketing space. MIMA has this programming market completely cornered locally. No one comes close. Ask anyone.

2–Networking. After almost 10 years as a PRSA member, I felt like I knew a lot of the PR people in town. Not all, obviously–but a decent number of folks. But, anytime I went to a MIMA event, I came away thinking–wow, I hardly knew anyone in this world. That needed to change. Big time. Especially as more of my business is referred through social/digital marketing folks.

A year-and-a-half later, and things have worked out pretty well. I’m getting smarter about digital marketing. I’m meeting a ton of new people. And I’ve had a big chance to impact change, helping start a whole new series of MIMA programming dubbed “MIMA Meet Ups” and helping build a new committee to help the organization with marketing.

But I still have a lot of love for PRSA.

Despite what some people may think, I’m still a big PRSA supporter–even though I’m not a member.

But wait–If I’m not a member, can I still be a supporter?

If I’m not a member, am I considered “disloyal” to PRSA?

I say “I’m offended you even thought that.”

Let’s tackle that first one.

Without my membership, over the last five years, I’ve been every bit the PRSA supporter I was when I was on the board and on committees.

I speak to PR classes and students all over the state–advocating they get involved with their student PRSSA chapter, and then join as associate PRSA members.

I’ve blogged about PRSA a number of times in the past. And contrary to popular belief, it’s usually in support of the org and its beliefs, like this SOA post I wrote a couple years ago. Now, I know not every post I’ve written about PRSA has been well-received, but my heart was always in the right spot. I love PRSA and everything they’ve done for me and my career. I want others to have those same opportunities.

I’ve worked for and with prominent PRSA board members including Melanie Boulay-Becker, Candee Wolf (former president) and Susan Beatty.

And, I attend the PRSA Classics Awards program as regularly as I can (missed this year–darn it). I do it to support my friends. I do it to support the industry. And I do it because it’s a damn good time (even though, to be fair, I’ve been critical in the past).

Let’s start by looking back at exactly what I gave to PRSA from roughly 2002-2009 during the time I was a member:

* I joined my first committee in 2002–the student relations committee and was an active member for two years (working with Tracy Carlson, former PRSA president).

* I then was asked to co-chair the programming committee by my friend, and former PRSA president, Candee Wolf. This turned out to be a fantastic move for me, as I got to know great people like Brooke Worden (former president), Dave Folkens and Anna Liewicki-Long (former president) as a result.

* In 2006, I joined the board. In 2008, I accepted a position as secretary on the executive leadership team.

In all seven solid years of volunteering and donating my time to PRSA. And, I’d say 13 years and counting of advocating for the organization.

So, PRSA friends, I want to say this to you: I love you. I really do. Just because I’m not a member, doesn’t mean I don’t feel the same way I did when I chaired those committees. Or, when I was on the board. I still feel a lot of pride and admiration for everyone involved with Minnesota PRSA.

That hasn’t changed one bit.

And, I dare say, it never will.

In my case, my business took precedence six years ago. And today, I would say I’m at a different point in my career. A PRSA membership doesn’t do the same things it did for me 13 years ago. It just doesn’t. People evolve. Situations change. And, that’s exactly what’s happened here.

It’s not you–it’s me. But, I will always have a soft spot in my heart for you, Minnesota PRSA.

You can always count on that.