Last Friday was the single biggest day of the year for retailers. You probably noticed. Circulars in your paper (if you still get one). Direct mail pieces. Advertising campaigns. Media stories. It’s hard to miss Black Friday.

But, we see so much from retailers in traditional channels like TV, direct mail and display advertising–what are these same big box retailers doing with social for Black Friday?

So, I started to do a bit of research. I took a look at six large big box retailers (Best Buy, Target, Wal-Mart, JCPenney, Toys R Us and Macys) and what they did–and in some cases, didn’t do–on Black Friday on Facebook and Twitter (I stuck to the main two networks since that’s where most of them were spending the most time).

Since many folks are convinced they can’t keep up with the big brands in social now, I thought we’d take a closer look at what they’re really doing on the biggest day of the year. After all, you’d figure they’d be putting their best foot forward on Black Friday, right?

But after looking through what these brands were doing online, I think you’ll find you might not be as outdone as you might have thought. Take a peek.

Nothing all that ground-breaking here. Best Buy shared the requisite sale information on Black Friday on Facebook and Twitter. But they do have their “What would your gift do” campaign going–which is really more of a holiday campaign than a Black Friday campaign (but a different idea, nonetheless). They also worked with TheNextWeb on Black Friday to participate in a chat about gifts for guys on the go.

Graded out: B (Nothing too creative, but a couple ideas put them ahead of the curve) 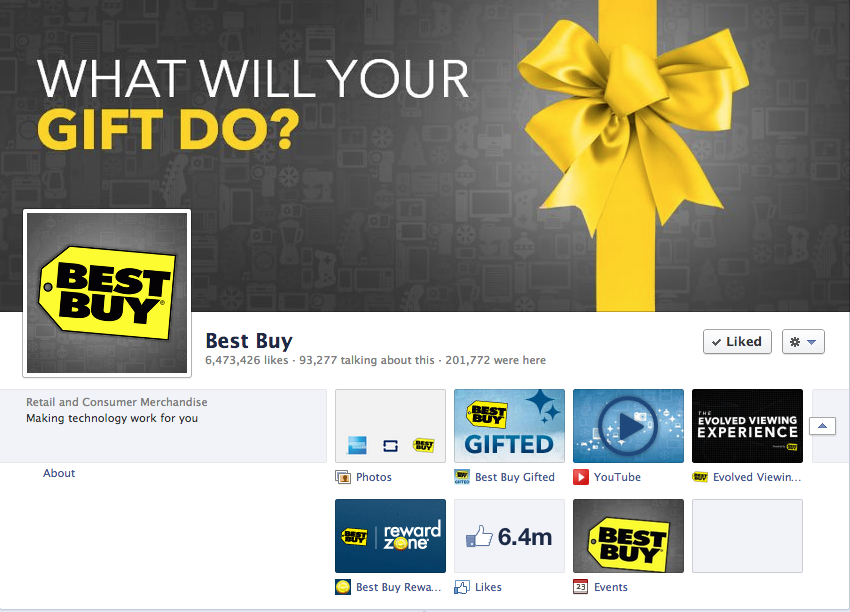 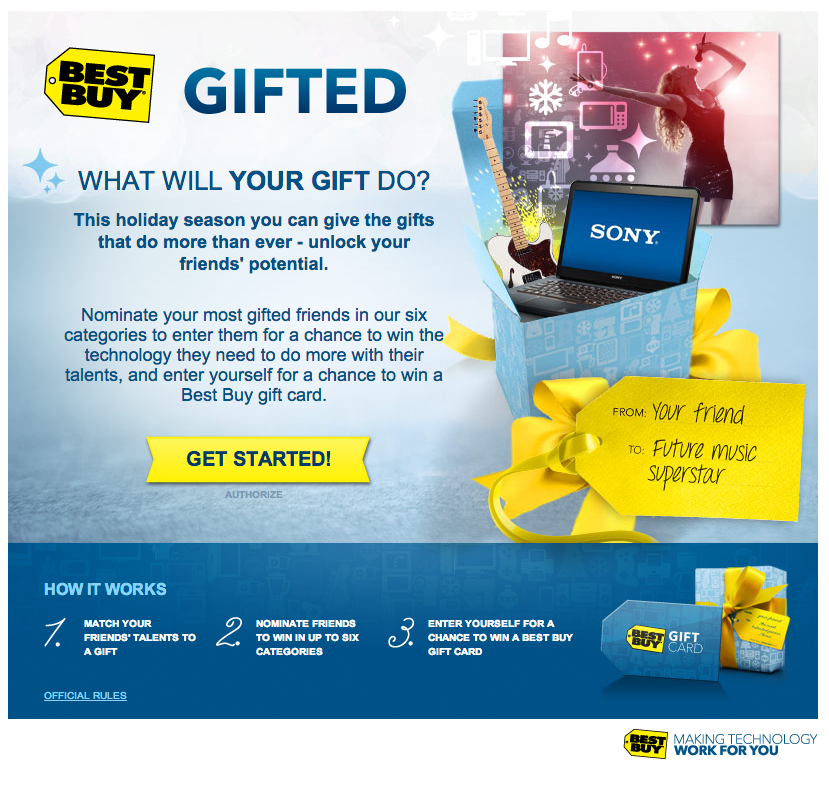 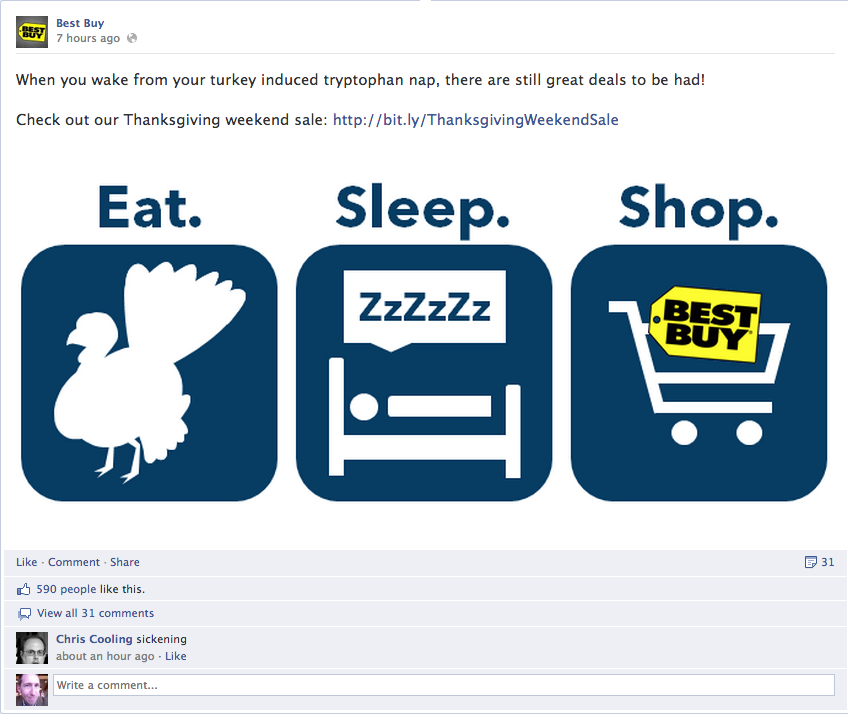 One of the better coordinated and consistent Black Friday campaigns, Target really put on a branded campaign on Facebook (where they have a whopping 20 million fans) that kept things pretty basic. No unusual promotions. No creative tactics. Just blocking and tackling. In fact, they only had ONE tweet from the @Target account on Black Friday. (also note the most liked Facebook post among all these brands on Black Friday was one from Target highlighting their deal on the iPad).

Graded out: B+ (stuck to the basics, but maybe that’s all that’s needed if you do them well?) 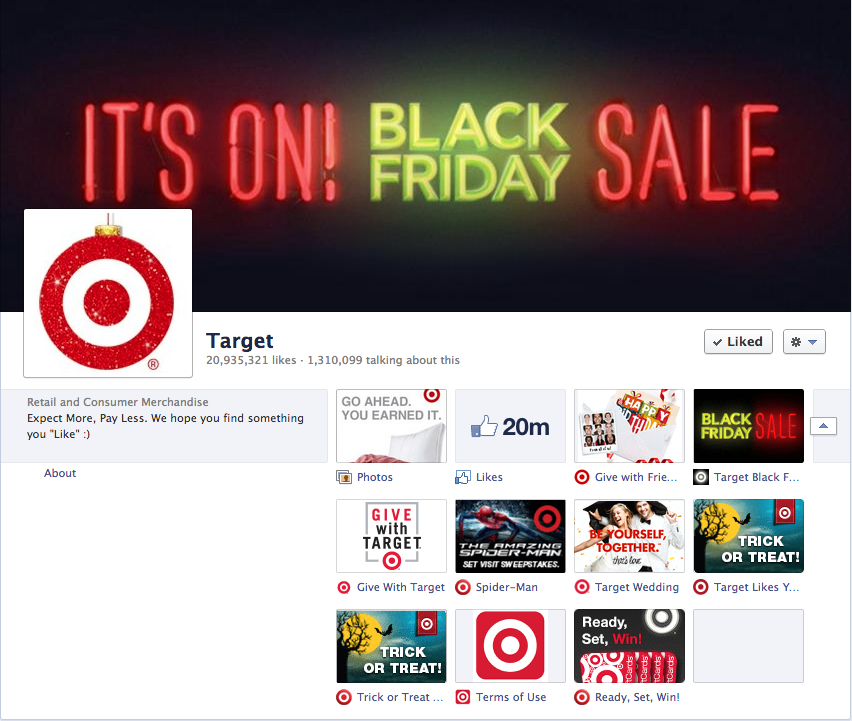 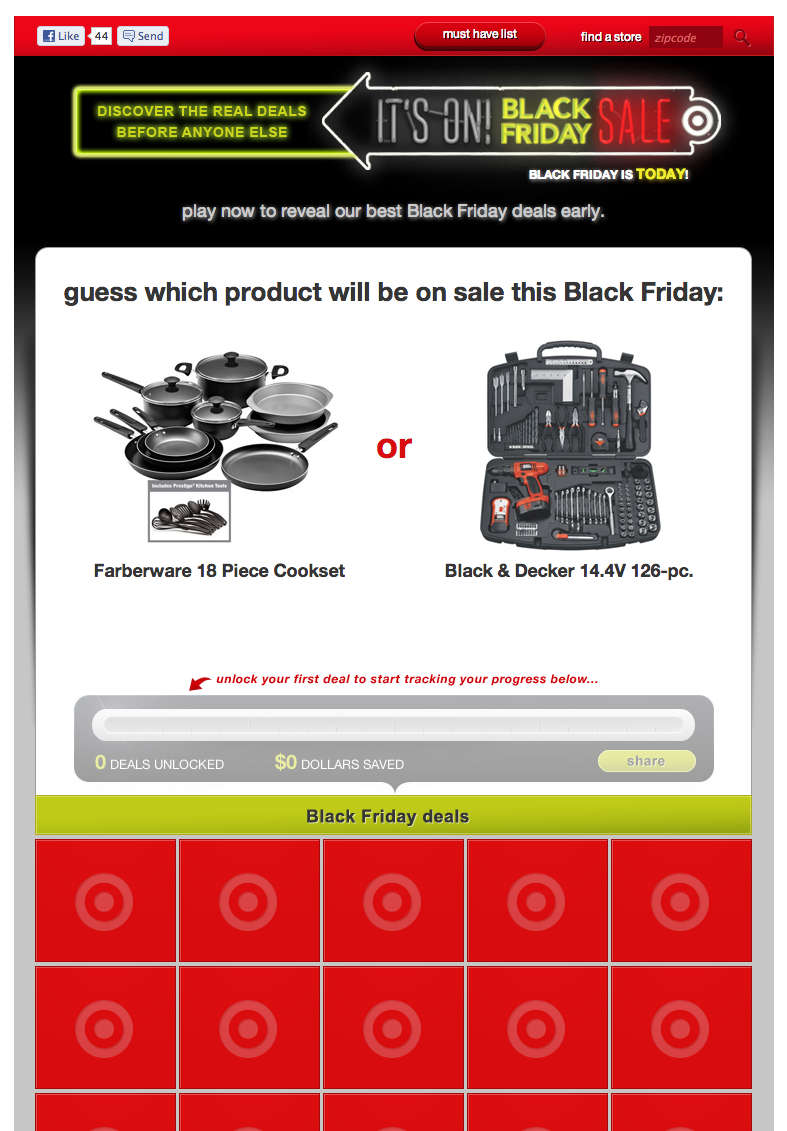 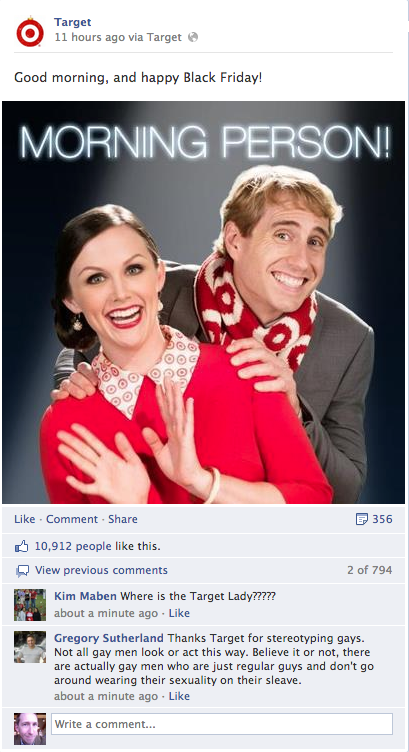 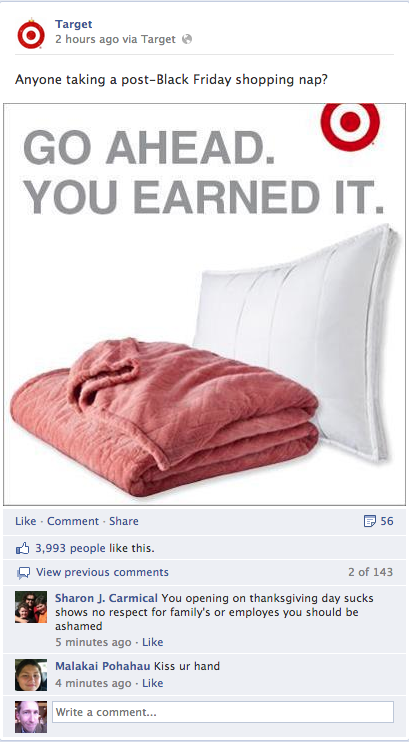 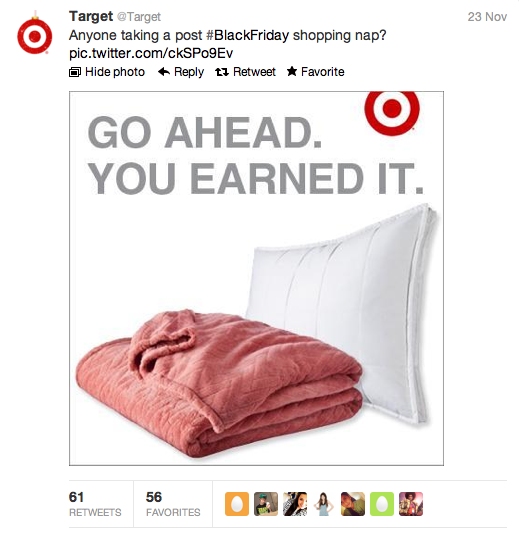 JCPenney clearly hinged its social marketing efforts to its “Pin” campaign where customers can get a pin in-store for a chance to win one of many prizes. Again, well coordinated from a creative point of view, with the same imagery and branding on most promotions.

Graded out: B (like the “Pin” campaign as it tied “real life” to social, but on the surface it didn’t seem to generate the engagement or awareness I’m sure they were looking for) 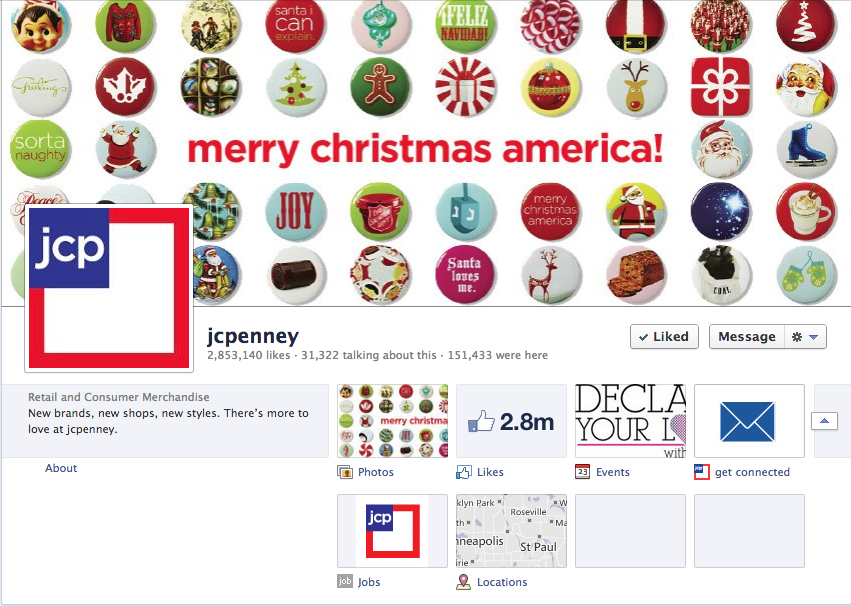 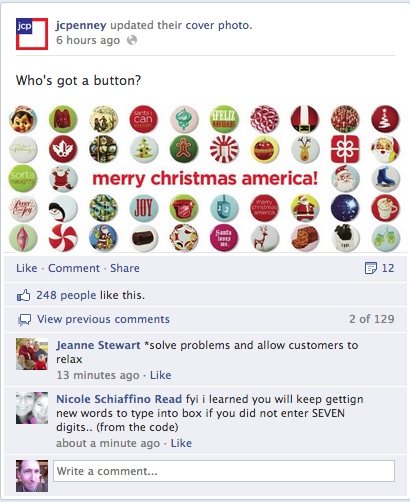 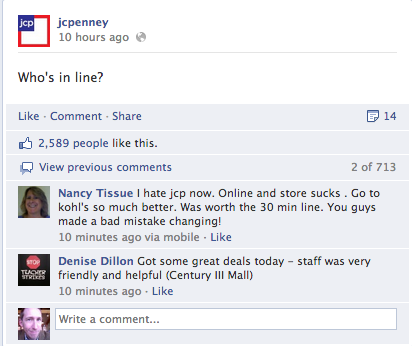 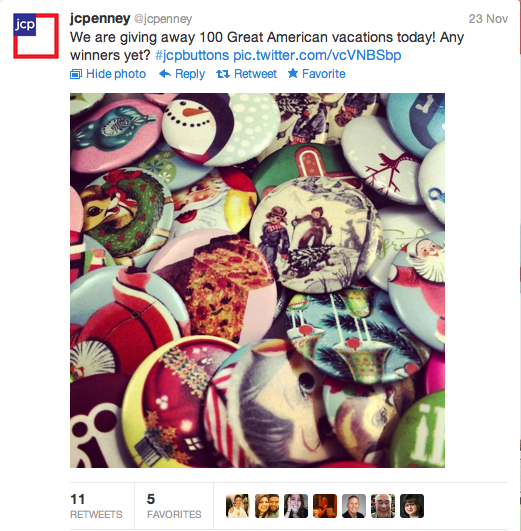 Over the Thanksgiving weekend, the one event Macy’s clearly hitches its star to (pun intended) is the Macy’s Parade in New York City. Socially, we don’t see anything unique from Macy’s–and we see a campaign that seems a bit disjointed. No consistent creative. No consistent messaging. The mobile app Facebook post was different–and pretty useful, I would think, for shoppers.

Graded out: C+ (inconsistent branding and messaging throughout Black Friday) 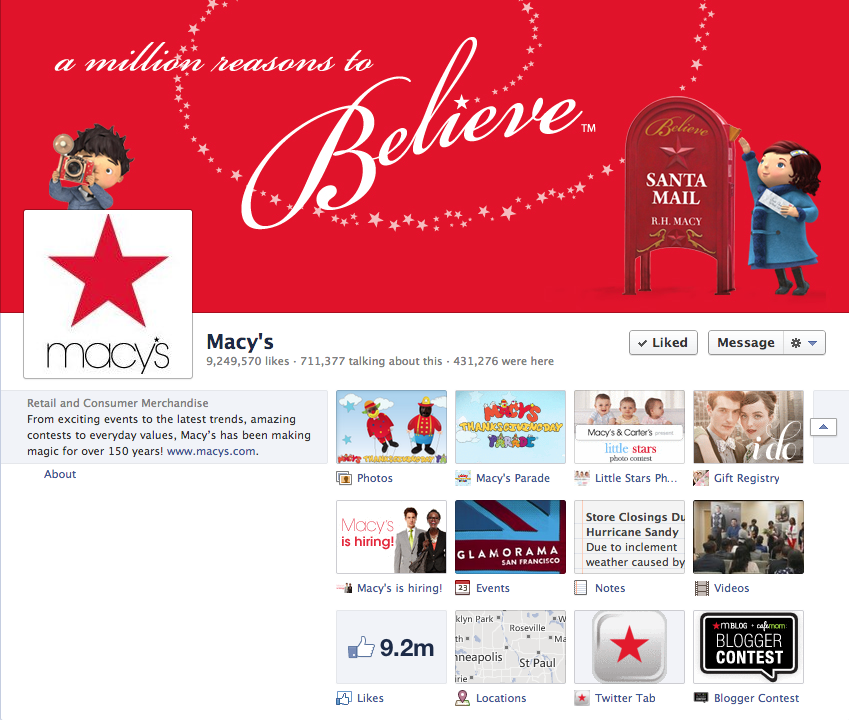 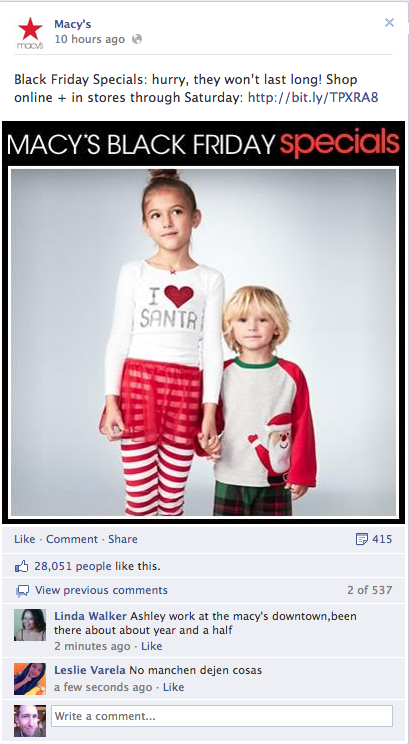 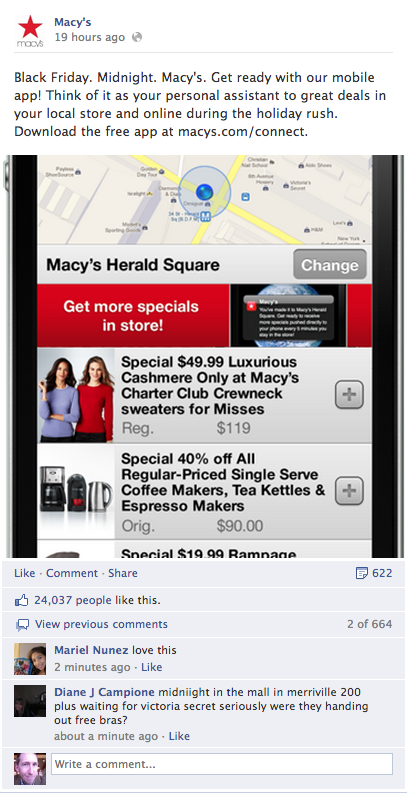 Consistent branding and creative on Facebook, but no real stand out idea from Wal-Mart on Black Friday. Then again, they were the only brand to use the oft-used “like” post (which generated nearly 60,000 likes). I also thought the use of #walmartelves on Twitter was a good idea (without creating a separate “help” account of clouding up the @walmart stream).

Graded out: B (just the basics, but again, did them fairly well) 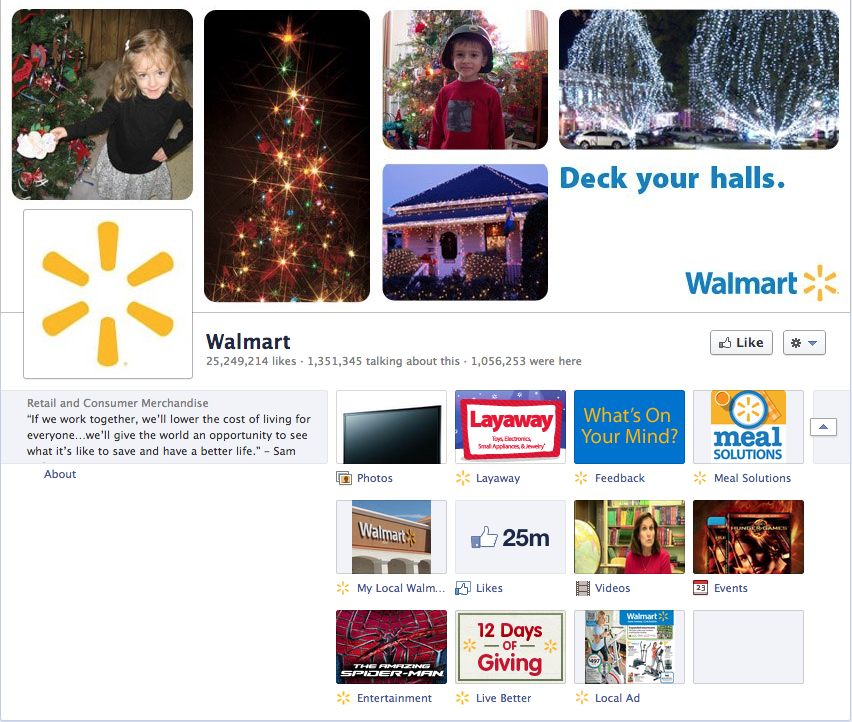 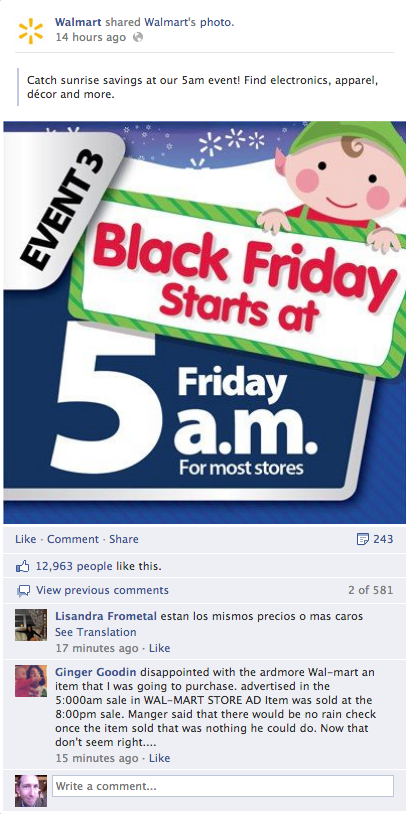 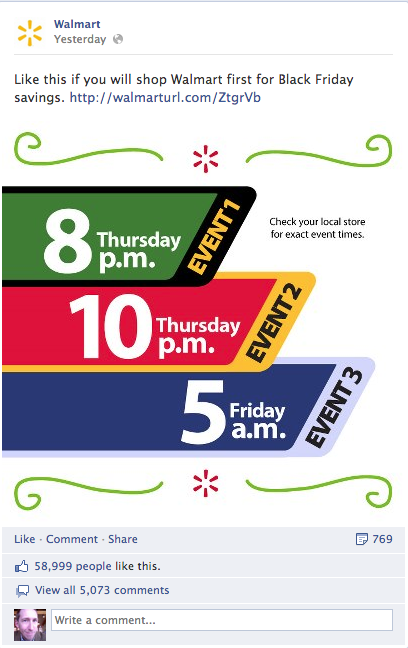 Toys R Us executed one idea–the Top 10 tips to become a Black Friday Hero–fairly well across Facebook and Twitter. On Facebook, they made the content useful by creating a graphic from it (which works much better than just using text). On Twitter, they broke out the content into 10 separate tips they tweeted throughout the day. Not rocket science, but good execution on a basic idea.

Graded out: B (Also one of the few retailers to take a “giving back” approach to Black Friday with its Hurricane Sandy efforts–Toys R Us is based in New Jersey). 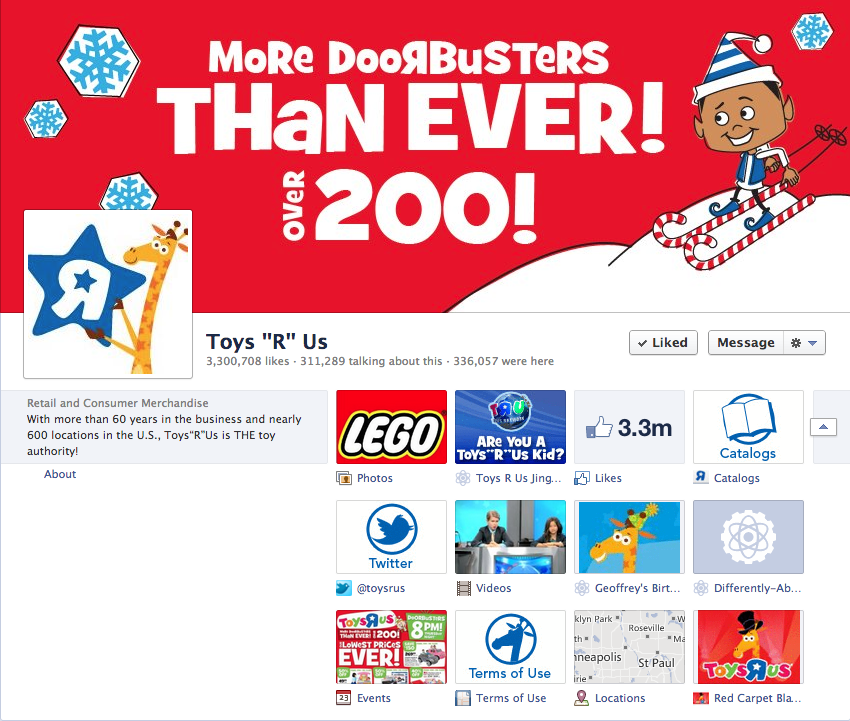 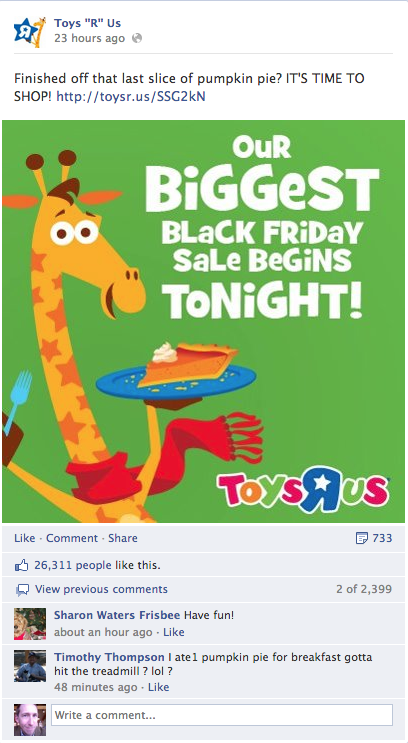 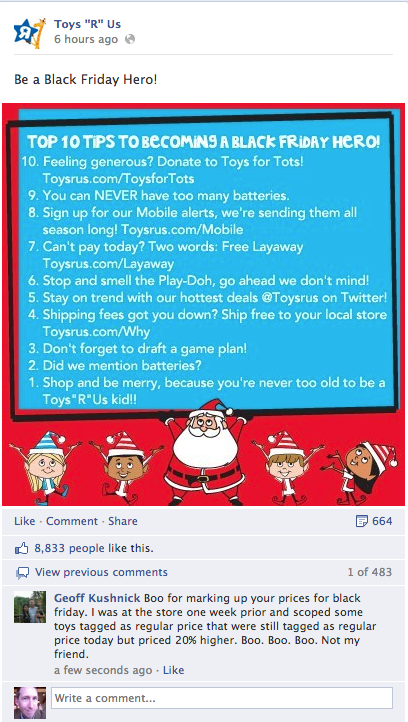 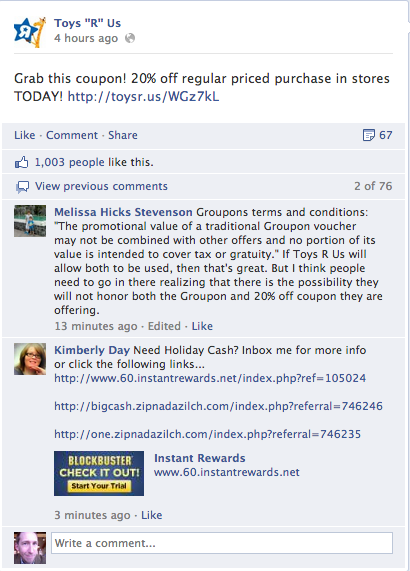