Home Blog HAPPO|PR How long should you stay at that dead-end job?

How long should you stay at that dead-end job?

During the first few years of my career, I was in a lot of what most people would call “dead end jobs.”

It wasn’t that these jobs were dead-ends. It’s that there was no room for growth and advancement. The positions were typically coordinator/specialist positions where I was working for a manager level marketing director who then reported up to an owner/VP-type person. 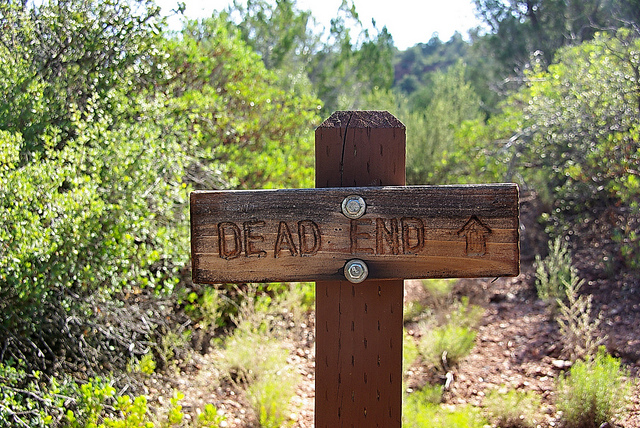 Chances are, you’ve probably been in a dead-end job at some point in your career, too. Right?

Or, similarly, maybe you’ve been in that job where the fit isn’t right, or you have a boss you don’t get along with so well. Those can be dead-end jobs, too (in a different way).

The real question is: How long do you ride it out?

Leave too quickly, and you start getting the reputation as a job-hopper. Someone who’s only looking out for themselves.

Stick around too long and you could wear out your welcome. Or, you will get to the point where you want to shove sharp objects directly into your eye sockets. Neither path is a fun one.

So, what’s the right timing? How long do you stick around?

Here’s my thinking on this–a lot of factors should play into any decision you make:

Here’s an uber-honest assessment of a situation I was in years ago. Had a great job at a small agency here in town. Loved it. But, it was stressful. High-octane job (at least, for me it was). Right after I took this job, we had our second child. We had complications with that birth. My Dad was in the hospital that year. My aunt died unexpectedly. It wasn’t the best year. My life situation was rough. And, it showed at work. I was more stressed as a result. So, I decided to take a step back, accept a job that included far less stress, and just “coast” for a while–because that’s what my family and I needed. Sometimes, your “life situation” will dictate your decision more than anything–even when you actually do like the job.

If you leave now, will you be missing out on an opportunity?

Another personal example: When I left my corporate gig years ago for an agency job, the writing was on the wall. Political ides were shifting. People were moving. My job (along with many of my coworkers jobs’) might be in jeopardy soon (turns out, I was right). So, I bolted. But, if I would have stayed around for just a little while longer, I probably would have gotten a chance to work a few more major PGA events. I would have had a chance to work with some PGA players (sponsors). And, I would have got the chance to work the PGA Championship for a second time (a dream opportunity). I missed out on all that to leave the firm. Did I make the right decision? Maybe. But, just be sure to ask yourself before you leave: If I were to stick around for three more months, what opportunities would I have?

How bad is it, really?

Is it to the point where you really just don’t want to get up and go to work in the morning? If yes, it’s probably time to leave. If it’s not at that point yet, you may have some wiggle room. Typically, I think a lot of people just get antsy. They want more money. They want a better title. They’re competitive. Who doesn’t want all those things? But, at the same time, if your job isn’t really all that bad, and you’re not completely hating life right now, I say stick it out a bit. After all, sometimes, things can turn around. Bosses leave companies. Political tides turn. Opinions change. Companies turn around. Things happen–and we can’t always predict that. My advice: Resist the urge to leave just because you’re “antsy.”

We see this all the time, right? I remember leaving my first agency job 14 or so years ago. I wanted to see what life was like on the “corporate” side (which was funny, because I went to work for a manufacturing company–real “corporate”, right?). I was tired of agency hours. Tired of time sheets. Tired of of a lot of things people get tired with when they work for agencies. I was ready for corporate! But, once I started into the corporate job, there were different challenges. Politics. Things moved REALLY slow. Challenging and change-averse co-workers. The pastures certainly were not greener–they were just DIFFERENT. My point: Don’t look for “greener pastures”. Look for a position that’s the right fit for YOU–and where you’re at in your life and career.