Home Blog Case Studies|Online marketing strategy Ford Motor Company: One of the few brands to go “all in” with Google+ so far

Ford Motor Company: One of the few brands to go “all in” with Google+ so far

For a while now (read: Since Scott Monty took the help as head of social), Ford Motor Company has been on the cutting edge of all things social.

OK, that might not be fair—let me rephrase. Ford has not been shy about taking risks and pushing the envelope when it comes to social media marketing.

So, it should come as no surprise then that they are one of the very few companies (especially larger companies outside Silicon Valley) that have dove head-first into Google+.

Yeah, that Google+. The “ghost town” you hear so much about.

What makes this situation even more compelling is the fact that almost every other big company out there is taking the exact OPPOSITE approach that Ford has chosen to take—many companies have adopted a “mirroring” strategy. That is, taking whatever content they’ve produced for Twitter and/or Facebook and simply repurposed it on Google+ for the SEO benefits.

And who could fault them for that strategy? The SEO bennies are there. Just gotta do the “mirroring.”

But apparently Ford didn’t get the memo because they are certainly not taking that approach.

What are they doing? Let’s take a look at a few of the key ways Ford is utilizing the Google+ platform: 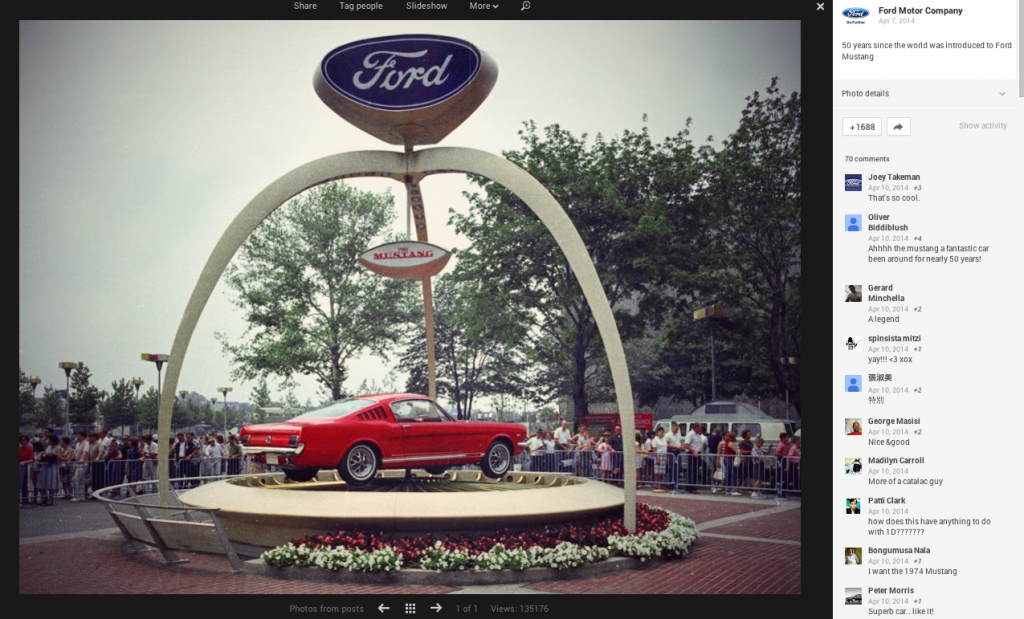 Ford (most likely) knows some of its biggest fans love the history and heritage of the company. Going way back to the Model T—and not so far back with the Mustang of the 1960s. Ford’s been around a long time, and they certainly have a lot of photo assets in those archives. And, they’re putting them to good use on Google+–a platform decidedly devoted to the big visual. Just take a look at some of these recent posts that play off the history of the company with strong visuals—they perform better from an engagement perspective than their run-of-the-mill posts every time.

The power of the GIF!

A little gif can go a long ways. Isn’t that the saying? If it isn’t, it should be. Ford sees a significant uptick in engagement every time it uses a gif on its G+ page. This post for example, about Ford Driving Skills for Life–a program devoted to helping young drivers gain driving skills–garnered 655 +1s and 36 shares. Meanwhile, anecdotally, I’d say the average post on the Ford page gets between 150-300 +1s . Are these gifs “brand approved”? Most certainly not. But, gifs do catch the eye–and as a result, usually translate into engagement. Ford gets it, as usual. 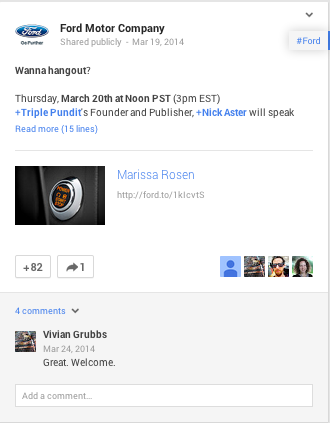 What’s interesting about the most recent Google+ Hangout Ford hosted is…they didn’t host it. The folks from Trip Pundit did (Nick Aster, specifically). In fact, Ford didn’t even post the video on YouTube–again, Trip Pundit did. But, they did promote it via Google+ and had a Ford representative on the chat. You can see what Ford is doing here–they’re experimenting with Hangouts, but taking minimal risk in doing so by being a guest of an established chat instead of starting one themselves. Nice way for Ford to dip their toes into the water to see how their community responds. 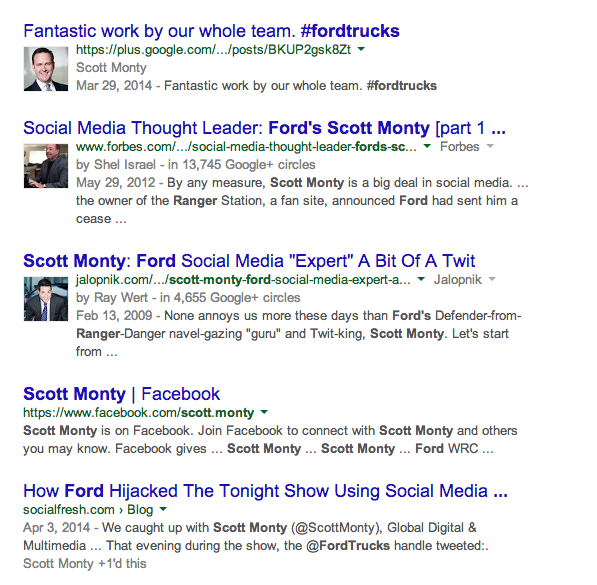 Remember Google Authorship? That tool that allows you to claim your content and differentiate it in search results by tying it to an actual author—or person. In Ford’s case, that meant Scott Monty, who pens a variety of Ford-based content and has a massive social following online. This allows Ford to build brand and affinity THROUGH Monty (and conceivably, others like him within Ford’s walls) and all the trust and goodwill he’s built up over the years (which has been a lot, if you’ve been paying attention). Probably not a huge deal for Ford, but it’s an easy thing to do (for Scott, at least) that builds more awareness and trust for the brand.

What’s next? I’m willing to bet Ford may be one of the first brands to go “all in” on +Post ads soon as well. Just seems like a good fit for Ford–and they tend to try things out before their competitors when it comes to new tools and products.

Should be interesting to see what’s next for Ford. Know of any other brands jumping into the deep end when it comes to Google+?