Engaging reporters on Twitter: Why it’s an over-hyped “best practice”

For years, we’ve heard the mantra: Engage reporters on Twitter.

In essence: Social media was to give us a better, more efficient tool for nurturing relationships with reporters.

Except, maybe it hasn’t. 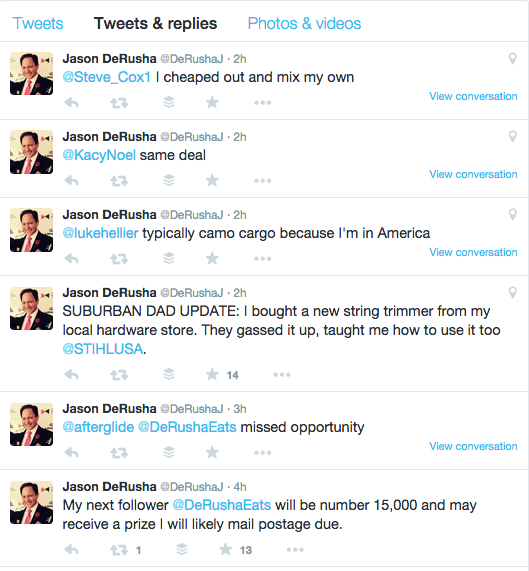 On one hand, Twitter and social media platforms have given us a set of tools that help us research the heck out of reporters. Where the former world gave us a bio on the media web page, the new world gives us an endless stream of information from Twitter, LinkedIn, and other social networks that can help us perfect our pitches (local WCCO-TV anchor Jason DeRusha is the perfect example here, as you can learn all you need to about him via the social networks he’s active on).

It’s not as easy and effortless as many make it out to be.

In fact, I would argue it may not even worth your time (not the research piece–the engagement piece). For these three reasons:

What they are interested in (primarily) is doing their jobs. That means using Twitter as a research tool (just like we should be!). They’re typically searching for specific items they’re seeking. Following specific accounts. That kind of thing. The last thing on their minds is “nurturing relationships with PR folks.”

Reporters are tweeting their stories–and that’s it.

Another guess: Some of these reporters don’t especially love Twitter. But, they may be forced to use it by editors and bosses who are requiring the to tweet their stories and increase “reach.” So, it seems they’re “on” Twitter, but really, all their doing in tweeting their stories and getting out. They have no intention of checking or responding to any replies. I have found this to be especially true with many trade media–no interaction with any other humans whatsoever.

Your time may be better spent on email or the phone

We still know reporters/editors check their email, right? And, most still have a phone. Are we better off sticking with the tried-and-true and traditional modes of communicating? Or, should we be nurturing those relationships on newer platforms like Snapchat? 🙂

Now, obviously, this isn’t an across-the-board deal. There are certainly reporters, editors and other media who actively engage on social. Locally here in MSP, Jason DeRusha, Dave Schwartz and Julio Ojeda-Zapata come to mind–all are very responsive across social platforms.

But given my recent media pitching experiences (largely with trade media, by the way), I have to say, those people seem like the exception. Not the rule.

I may be wrong.

So, I thought I’d ask some of my colleagues. Here’s what they had to say about engaging with media folks on Twitter, based on their experiences:

At events like the State Fair where media are there and already tweeting about things, I have had a lot of success just DMing media to stop by and check out whatever I was working on. I tend to think of Twitter as a networking tool rather than an actual pitching tool though, for the most part.

In my experience with Twitter, I’ve had little to no success when engaging with media members. My motto for Twitter is that “it’s a place where everyone is talking, but where no one is listening.” I struggle with finding credible sources or people. Likewise, I’m sure people on the other end wonder if I’m credible as well. These days I’m getting several followers, but they end up unfollowing me, which makes me think they’re a scam. I think Twitter as a whole has become too large and overwhelming for me. However, it is nice to find certain people to confirm information that you already know about that person. In some cases it can help if it’s a reporter and you’re trying to pitch a story and find one of their Tweets that can somehow tie into the story you’re trying to sell.

In my experience, engaging with media on Twitter has been very helpful — especially when it comes to building new relationships with relevant reporters and re-kindling old connections. It’s also an extraordinarily efficient research tool. Each morning, I can quickly scroll through my Twitter feed, reading through the opinions and interests of those I’m working with, while also identifying some of their top stories for the day I should have my eyes on.

Most recently, I’ve found Periscope to be just as helpful as Twitter. For PR pros, it’s a great way to break through the clutter and get on a reporter’s radar before their network size reaches that of their Twitter account. With Periscope, not only do you actually get to see the reporter, but also your interactions are even more instant and real-time.

The key for me is just being sincere and not necessarily following a reporter with a story in mind or favor to ask. If I’m following and engaging with a reporter, it’s typically out of genuine, shared interests. A recent example: I regularly tune into tech reporter and ABC correspondent, Jon Erlichman’s #TechTrivia broadcast — just for fun! After engaging with Jon and actively participating in his scope (and winning at trivia, I might add!), I emailed him the idea for a sports-themed trivia challenge, sponsored by one of my clients. He loved it, so we worked together to flesh out the details and execute the broadcast. Thanks to the relationship we built on Periscope, I scored an opportunity for one of my clients, plus established an awesome connection with a member of the media.

About three years ago, a USA Today travel editor I was stalking responded to a pitch on Twitter. That’s the first time I saw that. I was amazed because I thought the pitch was lame, but how can it be good in 140 characters? It was about a survey, however, and that can be an easy win. As for now, I am in very narrow niches: architecture and building media for one client and agriculture for the other. I’ve pitched a little on the architecture side without success, but in those cases, it was to editors I don’t know. I think it’s just like regular media relations: If you have a relationship with your editors, they will be responsive on the channels they hang out on. My editors do almost all their wheeling and dealing in email, so that’s where I go to talk to them.

Where I’ve seen some success is simply engaging — following, interacting, responding. It’s simply another avenue for building a relationship. Then, when I have a relevant topic or story to pitch, I may be able to either ask to email, or reference the twitter convo when I do email. I suppose I should say that I work heavily in BtoB, so perhaps they may be more of a fit or easier to reach. I agree it’s not one-size-fits-all, and I wouldn’t say Twitter led directly to a successful pitch more than a handful of times. But I think Twitter is just another avenue to learn more about who you are pitching so you can suggest relevant sources and stories.

I have found Twitter a good way to nurture relationships and visibility with targeted media. For example, you can share stories that they are writing and reading, and engage in thoughtful conversation about shared topics of interest. However, I have had greater success with journalists reaching out to me on Twitter or because of a tweet than the reverse. I am not saying that tweeting a pitch never works but in my opinion, email remains the more practical and responsive method.

So, kinda of a mixed bag, right? I have a feeling if I asked 100 more PR friends, I’d probably get a similar mix.

Based on my experience, I guess I still feel like this is one of those “best practices” that’s very over-hyped. But, social media used correctly, can be an outstanding research tool to learn more about reporters.

I just don’t think it’s worth the time to spend “engaging” them.