According this article on the Minneapolis Egotist, the campaign was “put together to help drive brand affinity with this new fandom on a platform they love.”

Minneapolis-based Periscope was behind the campaign as BW3’s social agency of record.

So far, BW3’s has only made a couple posts about the campaign–actually, just these two: 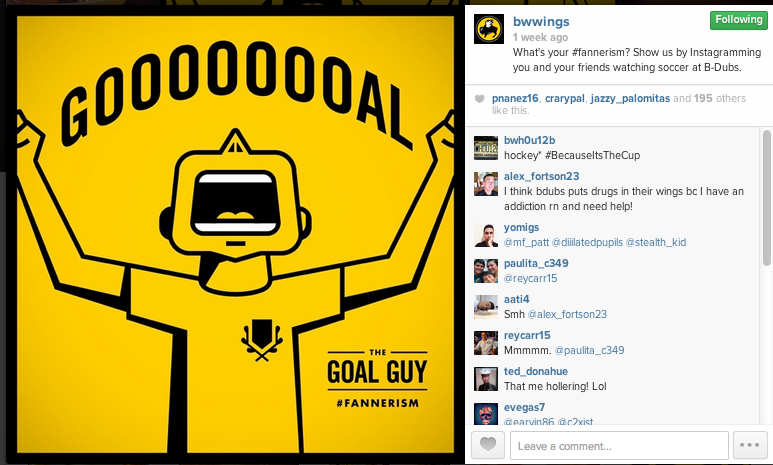 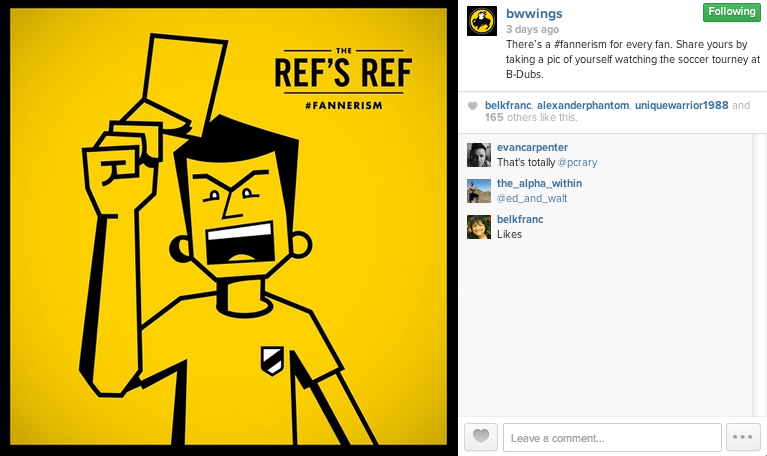 The idea? To “encourage fans to share their own #Fannerism by taking photos of themselves enjoying the World Cup at Buffalo Wild Wings”, according to the Egotist.

The Egotist article goes on to say that “submissions will be rewarded using Instagram’s direct feature, helping provide fans with the opportunity to fuel ongoing World Cup #Fannerism throughout the tournament.”

Not sure exactly what that means, but I’m guessing that means BW3s will be sharing coupons and freebies with fans who share pics on Instagram (fuel=beer?).

So far, it’s tough to say if the campaign is delivering.

A quick search of Instagram for #fannerism pulls up just five results (two of which are BW3 posts). 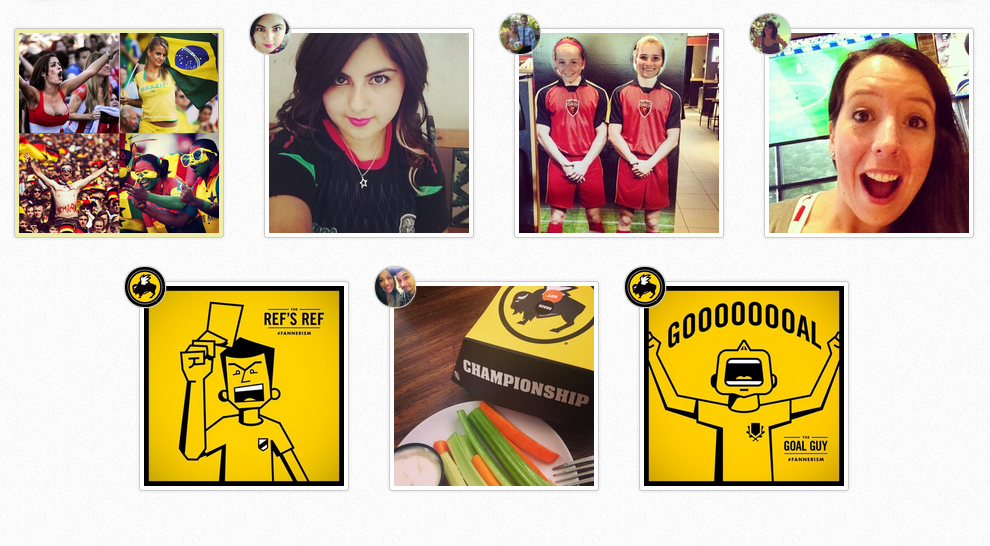 However, if you do a larger search for #bww, you quickly pull up half a million pics–everything from food shots to shots of the BW3s logo to actually what they’re looking for (shots of people watching the soccer games at BW3s–although in my quick search I saw a lot more of the former). However, keep in mind, none of these half million pics were tagged with #fannerism. 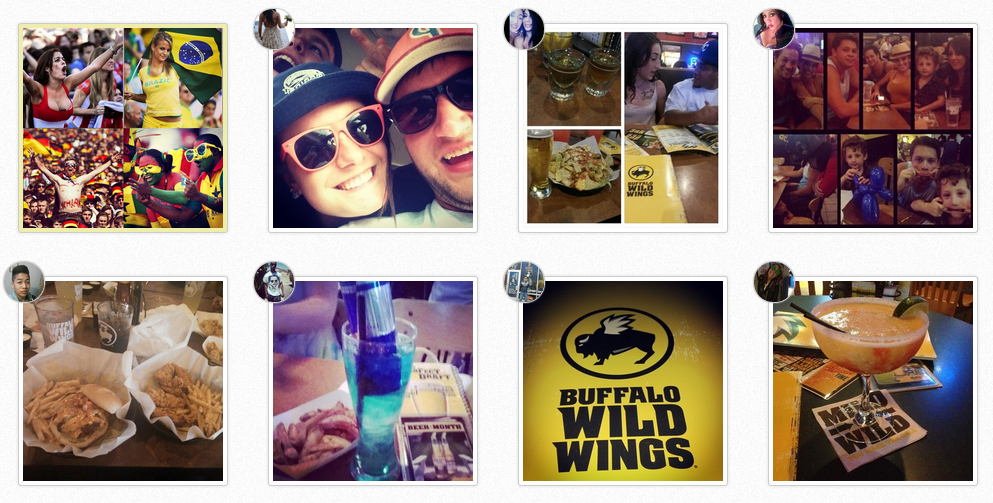 So, just a few days into the campaign, it’s tough to tell if it’s “working” or not.

But, my bigger question is this: What does success even look like for a campaign like this?

Let’s go back to the Egotist article. Looking solely at this article (and full disclosure: I haven’t talked to anyone at Periscope of BW3s), the goal may really just be loyalty and brand affinity–a typical-type goal for social-based campaigns.

If that’s the case, metrics like likes, followers, impressions, comments and shares are going to be key.

But, the BW3s Instagram page only has 2,335 followers–hardly a big number considering BW3s footprint. But, in fairness, they’re just getting started on Instagram.

What’s more, for a brand committing to Instagram in a big way with this campaign, you wouldn’t know it by looking at their account. They have just 11 posts since starting the account on May 28, 2014. They’re following exactly ZERO people. And, I’m not sure I saw a single comment by BW3s in any of its posts (not that this is necessary, but in this case, I think it’s relevant). 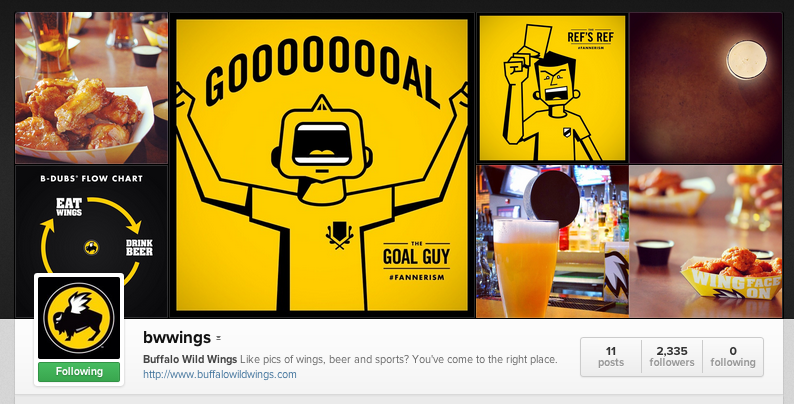 What about impressions? Tougher to measure on Instagram, right? And, since no one’s using the #fannerism hash tag (3 people so far, remember), they can’t lean on that. So, it’s going to be tough to prove those people who are posting pics of their group on Instagram at BW3s are doing it BECAUSE of this campaign. Chances are, they probably would have done it anyway. So, then can  you attribute those pics to this campaign? I’m not so sure.

What about engagement metrics? Like I said, I can’t even find BW3s commenting on its own IG posts–let alone others. So, I’m guessing that’s not happening. Jump over to their Facebook page (where they’re also promoting #fannerism) and you see a post with hundreds of comments from passionate fans. Great, right? (but most likely supported with FB ad dollars) 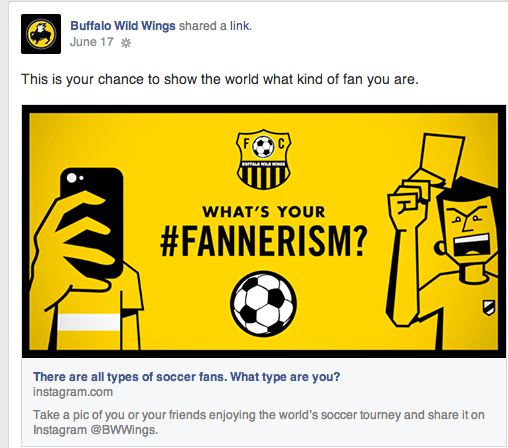 But again, I can’t find many (if any) BW3s comments back–even though they clearly have the opportunities (BW3s could easily respond to a number of the comments below if engagement was the goal). So, for a brand that may be looking for engagement as part of this campaign, it seems like they’re missing a number of great opportunities here between Facebook and Instagram. 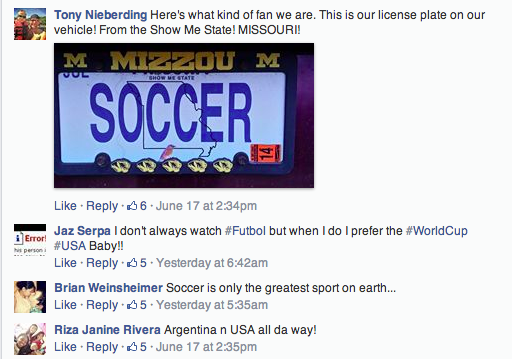 So, I don’t know. The campaign is clearly just beginning, so we really can’t judge its success yet. But, I’m just kinda confused as I analyze this one. I see a brand pushing the envelope a bit (smart). Taking advantage of a big, newsworthy event (World Cup–also smart considering the client). And doing it on a platform their fans are clearly already on (also smart).

It just seems like the execution is missing a few pieces.

What do you think? Is this a good attempt at a creative campaign by BW3s or does it really lack teeth?