A few weeks ago I started up a new show: SOA. For the unititiated, that’s Sons of Anarchy. One of the most brutal and absurd shows on TV. It includes rape. Vigilante justice. Drugs. Guns. And I’m absolutely glued to it. 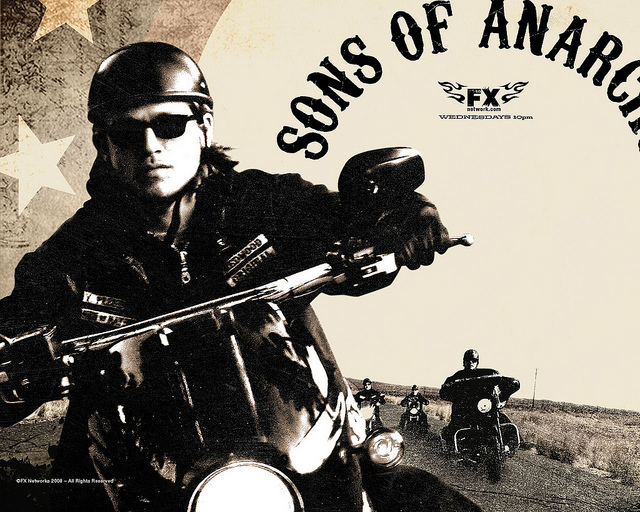 Because it’s not a show ABOUT rape, vigilante justice, drugs and guns. It’s a show about relationships, trust, honor and loyalty.

If you watch the show, you know what I mean.

Surprisingly, the Sons MC (that’s what they call it in the show, the “MC”) operates under a strict code of ethics–very similar to the PRSA code of ethics (don’t laugh–at least not yet), which you’re most likely familiar with if you’re a PRSA member of an APR.

You’re kidding, right Arik? A motorcycle club operating under a code of ETHICS? Oh yeah. And I can prove it. Let’s take a look at 6 ways the SOA lives by the PRSA code of ethics:

Protect and advance the free flow of accurate and truthful information.

SOA lives this one in almost every episode. They keep the lines of communication open with all the other motorcycle clubs in the area–Lido, The Mayans, you name it. They’re all in direct communication. If Clay needs answers, he goes to the president of these clubs. Free flow–both ways (in most cases–OK, so it’s not perfect).

SOA makes all of its club decisions behind closed doors in the clubhouse. Sound exclusive, right? Well, it’s really a pretty solid process. They convene in the clubhouse, discuss the issues they need to vote on in an open and honest way and take a vote on each decision. Each member gets floor time, if they want it. Each member gets a vote. Sounds like informed decision making to me…

Protecting private and confidential information is a credo the SOA lives by every day. In the show, the club has a propensity to break the law (big shock, right?). With that comes consequences. The ATF is all over them. Even local law enforcement in spots (even though the chief is in their pocket for most of the show). When SOA club members are pulled in for questioning, protecting private club information is paramount. You squeal and you’re dead. It’s that simple. So, different consequences than our world, obviously, but you get the idea.

In SOA lingo, “prospects” are those who are trying to become official SOA club members. They help the club with various “tasks”. They help manage the clubhouse. They’re even asked to break the law. All in an effort to become a chartered member. Outside of the “breaking of the law” stuff, SOA takes a very fair and honest approach to this process. Best prospects become members.

Work to strengthen the public’s trust in the profession.

As PR pros, we’re constantly working to help the public (and our clients) better trust our profession. SOA has the same challenge. SOA basically rules the small town of Charming–but they also protect it (something the cops just can’t do). So, you could say SOA is always working to gain the “public’s” (in this case, the residents of Charming) trust. In fact, in one episode in season 3, after a drive-by shooting in town, in which the deputy sheriff is killed, the public’s trust in SOA takes a hit. They no longer feel safe–and SOA has to work that much harder to win it back.

So, on one hand we have a ruthless motorcycle club. On the other, we have our PR colleagues. More similar than you might have thought, huh?

Yeah, that scares the heck out of me, too…