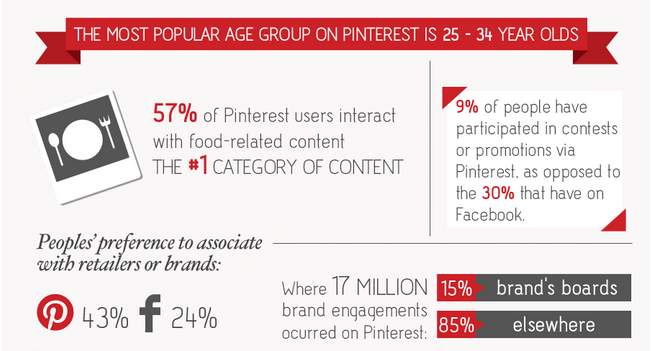 Obviously, not all brands are doing it wrong. Clearly, some are winning. Big time. Sony, for example.

But, the bulk of the stuff I see on Pinterest from brands is pretty myopic. Look at me. Look at us. Pin our stuff. That’s what it screams, doesn’t it?

Now, you could make an argument that merely posting branded images to Pinterest isn’t necessarily a bad thing. Get your content out there–let others repin it. Promote it across your other social channels. Basic approach, right?

But here’s the thing: That’s not how people use Pinterest.

People use Pinterest (increasingly) for product discovery. According to this infographic on Social Fresh (from WishPond), 69 percent of online users have bought or wanted to buy an item they found on Pinterest.

People are also using Pinterest as a mindless escape–I wrote about that a year-and-a-half ago. In fact, it wasn’t my opinion–it was straight from the mouths of 17 “super users”.

And finally, people are using Pinterest as a source of ideas. For weddings. For dinner. For travel. You name it.

But, people aren’t using Pinterest to interact with brands. Not necessarily.

Here’s the four reasons I believe many brands are “doing it wrong” when it comes to Pinterest:

According to the infographic featured above, only 9 percent of users have participated in a contest on Pinterest (compared with 30 percent on Facebook). So, 1 in 10 of your users will participate in a contest you organize on Pinterest. Do you like those odds? I don’t. So, why waste your time and energy organizing these contests? Because that’s what they take: Time and energy (read: budget). Instead, why not spend that time creating interesting, compelling, creative and useful imagery to post to your boards. Or better yet, spend that time interacting with potential fans/customers across Pinterest on boards that ARE NOT yours.

Engage where your customers are (hint: Not on your boards)

According to the infographic, 85 percent of users are engaging with brands–but NOT on their boards. A mere 15 percent of users are engaging with brands on their boards. Again, almost 1 in 10. Not great odds. So, why not spend more time where your customers are spending time–in the Pinterest atmosphere. Go find them. Repin their stuff. Comment on their pins. It’s kinda community management 101, in a way.

Are you SURE Pinterest is the right platform for your brand?

So many brands have gotten caught up in the Pinterest craze this last year. And, so many people have been actively encouraging brands of all walks to get involved. But the simple fact is: Pinterest is DOMINATED by a handful of categories: Food, home decor, arts and crafts and style and fashion. If your brand doesn’t play in one of those areas, it might be worth taking a second look at Pinterest. Here’s why. Again, you’ll spend a decent amount of time and energy (read: money) engaging here. And, if you’re say, an engineering firm, does that really make sense? I might argue no. Spend more time where you know your customers are. And where you know you’ll have a better chance of meeting your goals.

If you’re going to pin, pin with a price

According to the infographic, pins with a price tag receive 36 percent more pins than those without. Pretty compelling stat, right? So why aren’t more brands including price tags? We may see that trend shift, but if you’re a retail or consumer brand trying to sell your wares on Pinterest, you know people are in “buy mode” (see stats above). So, why wouldn’t you include a price tag with your pin.

Those are my observations. What about you? What missteps do you see brands making with Pinterest?