Running a Facebook promotion. It’s a tactic many brands have tried in the last year. Some more successful than others (great primer here, in case you’re interested). But, we know that a large segment of the Facebook population is following brands because they want deals and special offers–so, it makes sense to give it to them, right?

Yes, but it also makes sense to make sure you have your ducks in a proverbial row before you go out and make that offer.

To set up the example, earlier this week (on Sunday afternoon, in fact), they made the following offer to their fans via email: 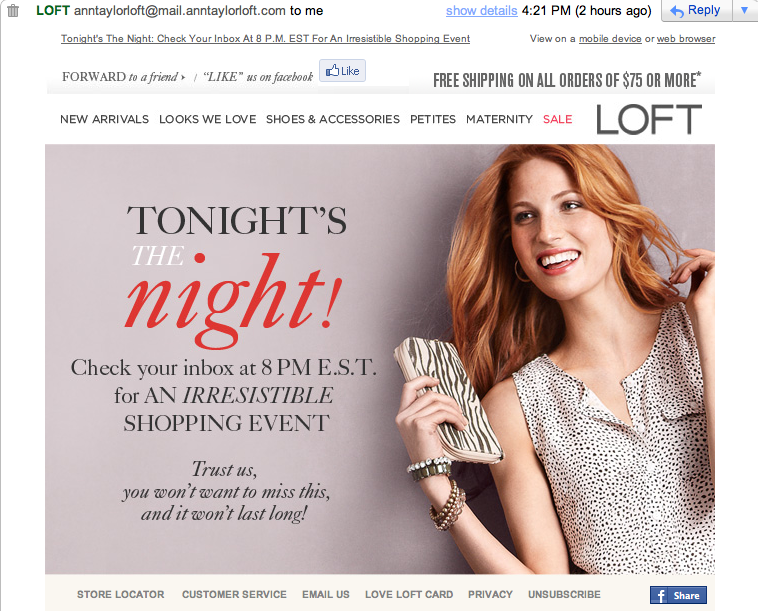 A couple hours later, they posted the following on their Facebook page:

A few moments later, they had a slew of pointed comments saying fans couldn’t access the Web site.

And two hours later, the final post of the promotion. This time, all but admitting the site had crashed and wasn’t coming back up in time for the promotion to be effective in the allotted timeframe:

Align with your different teams BEFORE the promotion

No one’s sure what was the cause of LOFT’s site crash, and I’m not saying they weren’t aligned. But, it’s an important–no, critical–point to keep in mind before you launch a Facebook promotion. Make sure all your marketing teams, departments and divisions are on the same page. Is there potential for a customer service situation? Make sure your customer service team is on point, too. What about IT? Web? The last thing you want to do is get blind-sided and be ill-equipped to handle a situation on the fly in real-time (especially during weekend hours when the corporate folks might not be at full staff–more below).

Consider WHEN you schedule the promotion

Again, I’m sure the LOFT folks thought this through. Apparently, they roll out these promotions quite often. And, it goes without saying that weekends are prime shopping territory. But, that means you need to consider staffing implications (and not just for your team). If you’re going to roll out a major promotion on a Sunday, you need to make sure staff is in place to support that work–and the potential snafus that might occur (like Web sites crashing due to overwhelming demand).

Make sure you’re monitoring ALL the customer touchpoints

Seems like LOFT was all over this, but I’ve seen enough examples of brands that launch a contest or promotion and then aren’t weighing in and/or answering questions as they pop up on Facebook, as well as other channels and customer touch-points. This is community management 101, but you need to make sure your community manager (or someone) is on point to monitor and respond, when appropriate (in this situation, I would have liked to see LOFT weigh in a bit more in the comments). Also, think about store staff that most likely heard about this issue on Monday morning. Make sure everyone that might touch a customer in a situation like this is in the know and has the information necessary to communicate accurately with the customer.

Kudos to LOFT here. Tuesday, they posted the following: 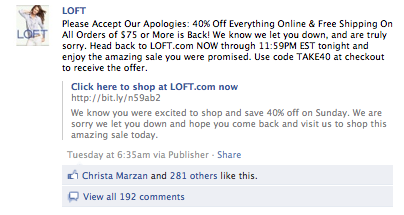 They apologized. They made another good offer (notice I stopped short of saying “great”–more soon). And they’re moving on. The only thing I would have done differently is I probably would have upped the ante on the offer just a bit–maybe make it 50% off? Throw in another one-time coupon to use at a later date? You said you were going to “make it up to them”–all the LOFT did was recycle the same offer 36 hours later. For some customers, that’s simply not good enough (and you can see that in the comments). But, most importantly, LOFT rectified the situation fairly quickly (the offer was up 36 hours after the original web snafu–not bad). Despite some of the negative comments on this post, I think LOFT handled this fairly well.

Anyone else notice this promotion over the weekend? Any other lessons to share?