Last weekend I was at The Dells with my kids (no laughing please–I grew up going to the Dells and have a strong affinity for the Upper Midwest’s Redneck Capital!).

As part of that adventure, we hit the Wisconsin Ducks. If you have no idea what I’m talking about, check this out.

Our tour guide was a lovely 19-year-old woman who was going to school in Minnesota. She cracked jokes. She was great with the kids (my son got to drive the Duck!). She was affable. She was a perfect tour guide.

Except for one thing.

She started every other sentence with “you guys.”

Don’t pretend you don’t know what I’m talking about. It’s so pervasive on YouTube, even a search of “you guys” pulls up THIS: 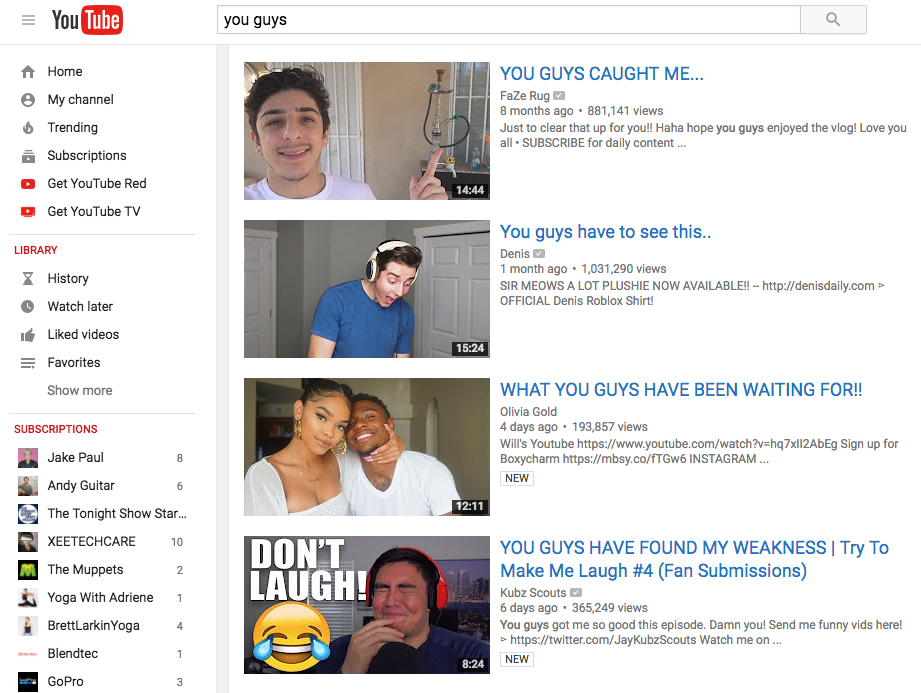 If you’ve watched any “influencer” on YouTube or Instagram, you absolutely know what I’m talking about because they start virtually EVERY sentence with these two words.

That’s the question. And, I think there’s a lot more there to unpack than you might think.

For starters, “you guys” is largely used on social platforms like YouTube and Instagram because of its more informal nature. And let’s be honest, language on social platforms has gotten a lot more informal than this. Punctuation, grammar … it almost feels optional at this point. So, “you guys” is a phrase that’s hardly at the top of the list when it comes to things to get worked up about on the internet. I understand that.

But, I also think there’s some laziness at play here, too. To me, “you guys” feels an awful lot like “um.” People are using it as a crutch. They’re using it because they’re lazy. Instead of using “you guys” every other sentence, work on tightening up your presentation style. I know the influencers of the world would probably say this kind of language is helping them connect with fans. And to that, I guess I would say, you can still connect with fans while being a little more effective presenter.

And, you could also make the argument that this phrase may be killing the future of public speaking.

You have an entire generation of kids now that are watching these influencers and people on YouTube, Snapchat and Instagram and admiring pretty much everything about them. From the products they use and adopt to what they do to the language they use. Hey, I have a 9-year-old and 12-year-old–I’ve seen it first-hand!

My kids actually attempted to create their own mock vlog on our summer road trip this year in the back seat. The first two words out of their mouths to start the vlog: You guessed it–“You guys.”

So yeah, younger people are picking up on the more informal tone and phrases these “influencers” and people on the social web are using. And, it’s part of a larger trend around the erosion of punctuation, grammar and other more formal communications structures. I don’t think these structures are going away anytime soon–but they’re certainly taking some big body blows right now.

And, I think that’s a big threat to the public speaking world.

Think about all the jobs that require you to be a competent (if not above-average) public speaker:

I mean, you could argue public speaking is a skill set anyone should have in any profession. So yeah, public speaking is important in the real world. And I’m just a little worried informal phrases like “you guys” are helping spur the erosion of it.

I know there are far more issues more worthy of my outrage. I get this is pretty small in the grand scheme of things.

But, give it 5-7 years. Let’s see how the next generation of public speakers fares.

I think that will be fascinating to watch.