Working in PR for Klout: An interview with Lynn Fox 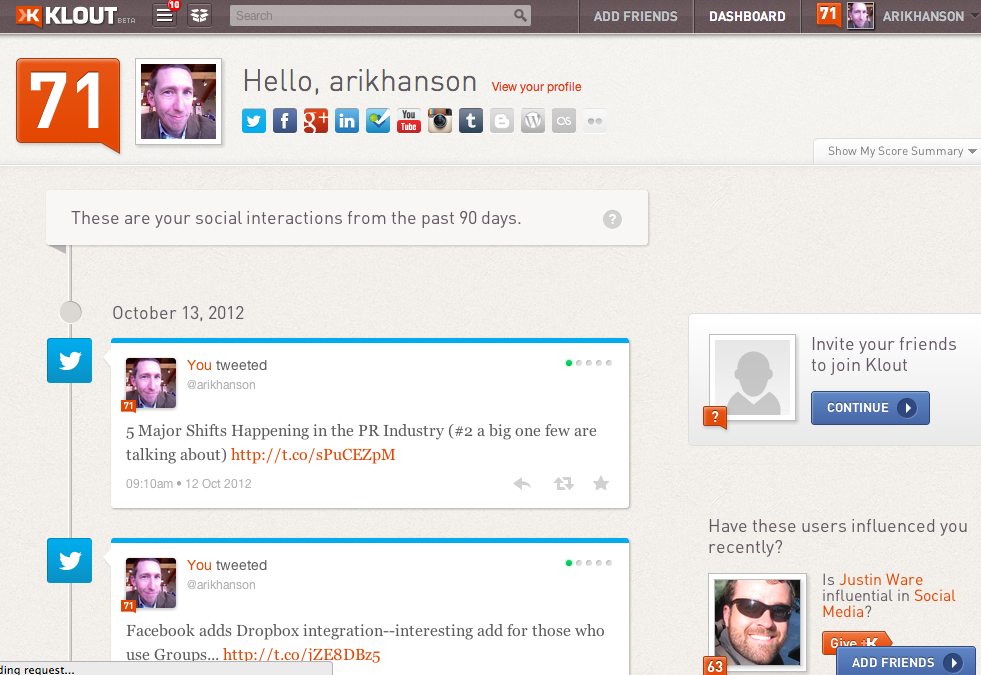 That got me thinking–what would it be like to work for a company that’s such a lightning rod in our industry? That stirs up so many emotions in people? How would the head of communications of a company like that handle that sort of thing?

A couple weeks ago, the head of PR for Klout, Lynn Fox, happened to tweet me thanks to a recent post. After a bit of exchange, she agreed to a quick interview. I took this chance to ask Lynn about what it’s like to work for a company like Klout, how she manage’s Klout’s role in the “social influence” conversation, and what she loves to much about the tech industry.

You’ve been with Klout now for almost a year as their head of communications/PR–what’s it like to work for a company that’s such a lightning rod in the social media industry?

It’s been fantastic. I’m one of those people who can only work for a product I really care about and believe in. Before meeting Joe Fernandez, I didn’t know a lot about Klout, and in fact, I had a fair share of skepticism. But when Joe shared his vision and perspective with me, I was sold. Why shouldn’t everyone – not just celebrities, politicians and media – get a chance to understand and be recognized for their influence? I get to be one of the people on the front lines to help people inside the tech bubble get used to that idea, and to help mainstream users discover and benefit from it.

In the last year, a number of folks in our industry have came out pretty vocally against Klout and what you’re doing in terms of gathering social information. I mean, some folks are really, really mad. How do you attempt to take the emotion out of the discussion when its so ingrained in people’s attitudes and perceptions toward your company?

We’ve found that it’s 90% education. The rest is whether or not you really feel that understanding your influence can be beneficial to you, and then still, we need to educate you about how that can happen.

Honestly, what Klout has suffered from is a lack of resources to scale the message of its value. When we are able to get in front of people to tell our story, they generally get it and become fans. Every time we have a major magazine article (like this Wired article http://www.wired.com/business/2012/04/ff_klout/) or product announcement, our registration numbers go through the roof, and we gain more influential fans. A good example is Michael Arrington, a vocal critic who became an investor after one meeting with Joe: http://uncrunched.com/2012/08/16/why-i-changed-my-mind-on-klout-and-invested/

But we’re a small company and don’t have a huge marketing budget. So the only thing we can do is use PR to spread our message as wide as possible and use that momentum to create more interest in sitting down with us.

It seems to me one of your big challenges would be to educate folks about how social influence is evolving (and Klout’s role in that). How do you go about tackling that challenge each day?

I basically answered this question above. We are very PR-focused here. We use news announcements as a platform to draw in the audience and tell our story. In August we rolled out a major score and product update. We used that opportunity to be very transparent about the Score, educate users about influence and tell a broader story about our methods. The response was very positive.

Salesforce recently caught some heat after TechCrunch reported the company was using Klout scores as part of its recruiting mix. Joe Fernandez quickly responded and sat down with TechCrunch’s Drew Olanoff last week to discuss the topic. My question: With so many stories like this popping up, how do you decide which of these stories Joe responds to? 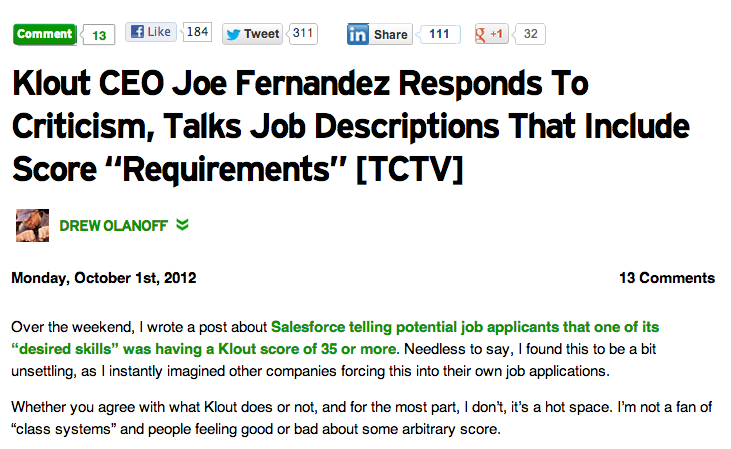 That’s a loaded question! (haha) Our decision of whether Joe speaks to media is typically case-by-case and takes a number of factors into consideration, including what the story is about and how prominently Klout will be featured. Joe is, by far, Klout’s best spokesperson, so it’s great to be able to make him available, but it’s not possible to accommodate every request for an interview with him.

Klout recently reached a pretty significant deal with Microsoft that will allow Bing to show Klout scores in Bing search results as a way to add relevance and context to those search results. What does a deal like this mean to Klout’s reputation?

The partnership with Bing is huge for Klout. Setting the product and data integration benefits aside, this is the first time they have made an investment in a social media startup since Facebook, and their massive audience will get a chance to discover and engage with Klout in new ways as we develop the partnership.

You have quite the resume–you’ve had stints at Twitter, Ustream and Apple, just for starters. What is it about the tech industry that intrigues you and keeps you coming back for more?

Thank you! If I had to name one thing that keeps me coming back, it’s the people. I had the chance to work for a short time in the entertainment industry, and I met a good number of very (and not so very) famous people. I came running back to tech. Yes, I found life-long friends in my entertainment job, but the people in tech are a thousand times more interesting, real, adventurous, authentic, individual and intellectually curious. If it weren’t for these people, the ideas would not happen, and it’s the ideas that make this tech world go round.

You’ve worked in PR/communications with many tech companies during your career–how is working in PR at Klout different?

Klout is, without question, the most misunderstood product I’ve ever represented. People are typically offended by something that is new and radical, and in this 140-character world they form very strong opinions based on one Tweet. It’s really fun to watch those snarky Tweets soften up and become more positive as we educate more people, and to be one of the people that helped change their tone. 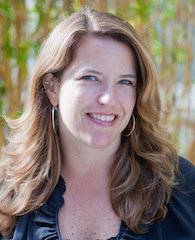 Lynn Fox joined the tech PR scene during Silicon Valley’s first bubble, has since made the rounds at the most celebrated consumer technology brands on earth. Now leading communications at Klout, Fox took previous high-ranking turns at Twitter, Apple, Google, Palm and Lucasfilm. Her career started as one of three people to lead the PR launch of DIRECTV, now the nation’s largest direct broadcast satellite service. She earned a BA in Communications with high honors from Loyola Marymount University and was recently profiled in BusinessInsider’s 50 Best Communications Pros in Technology http://read.bi/OWY7uG.