Home Blog Uncategorized Why can’t brands replicate the success of “Some Good News?”

Why can’t brands replicate the success of “Some Good News?”

In case you missed it, John Krasinksi’s popular “Some Good News” was sold to VIACOM-CBS last week. 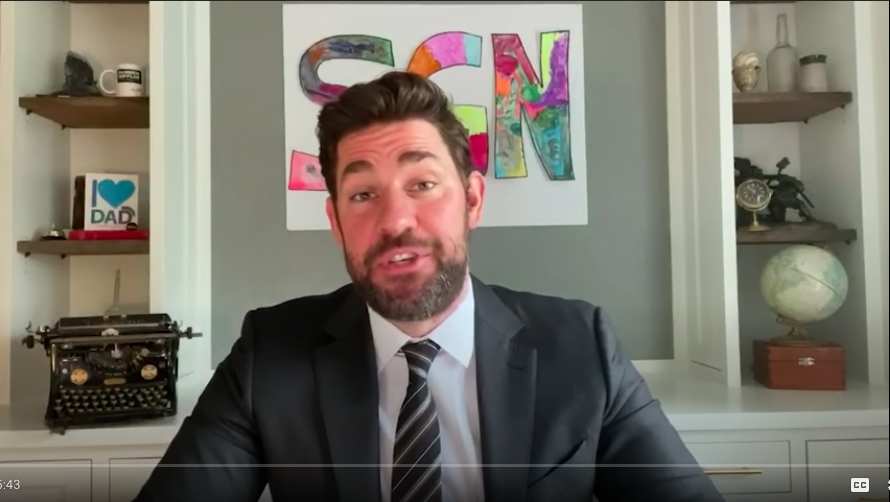 It’s not all that surprising. According to an AdAge article, SGN generated 55.3M views on Facebook alone since its inception–outranking Stephen Colbert and Seth Myers of late-night fame. It only trailed Noah, Fallon and Corden, but Krasinksi had only produced 15 videos on Facebook vs. Noah’s 297!

And, that’s just one platform! His YouTube numbers were similarly impressive. His first episode had 17M views while most hovered around 12M. Also, some context: Trevor Noah’s Daily Show currently has 7.45M subscribers–with a full team of talent and production behind him. Krasinksi’s show already has 2.58M with zero support, and only eight episodes in.

Point being: SGN has been a WILDLY popular show to say the least. And, that got me wondering: Why couldn’t brands replicate the success of Krasinksi’s show? After all, he’s an amateur when it comes to content marketing (and hosting talk shows) and he produced a show for eight weeks that was bought by one of the biggest media companies in the world!

But, before you go writing that “4 tips brands can learn from Some Good News” post, Krasinski had some huge advantages over brands. Advantages he exploited to the fullest:

Krasinski called in some favors. And, then he called in a few more. All through his celeb network. I mean, The Office reunion show alone is proof! He had Brad Pitt as a weatherman. He had Billie Eilish sing at prom (my favorite ep–see below). This was part of the intrigue of the show–which celeb was going to show up this week! I’m not sure brands have this kind of pull. Sure, they could leverage some of the celebrities and influencers they partner with, but that would cost them dearly. In this case, I’m guessing Krasinksi merely made a few phone calls and paid zero dollars for these appearances. BIG difference. Advantage Krasinksi.

2: Krasinksi is a pretty likeable guy

And his Hollywood star seems to be rising (his Jack Ryan seems to be a hit; only a matter of time until he’s “leading man” criteria). He’s also one of the stars of one of the biggest cult sitcoms of all-time (The Office reunion show was pretty solid–see below). That counts for a lot. And, doesn’t he just have that “I’d love to hang out with that guy”-kinda vibe? I think that’s a big part of what made the show successful–he appeals to a LOT of people. Now, brands could HIRE a guy like Krasinksi to host their branded shows. But, that would come at a big cost. Again, advantage Krasinksi.

3: Authenticity (and the boot-strapped nature of the program) rang true

I mean, he had a hand-drawn sign as his backdrop! He had a hand-drawn “I Love Dad” card in the background. He said the following in ep 1, which remains my favorite: “If it’s not clear already, I have absolutely no idea what I’m doing!”. The authenticity factor was off the charts. Now, a big part of that is he’s stuck at home producing this show on a shoestring. But, the other part of it was charming. And, almost comically under-produced. Brands, historically, do not like to go this route. Even now, during a pandemic! They want produced. They want buttoned up. They want polished. Under-produced and boot-strapped is not something brands do. At all, really. Adavantage: Krasinski.

4: The power of curation

One thing brands seem to really struggle with when it comes to brand journalism or content marketing is curation. They just don’t want to do it for whatever reason. They seem to think it holds no value, when quite the opposite is true. Curation holds tremendous power–especially in this current era of information overload. Krasinski is not really producing much new content on his show. Oh sure, he produced the Hamilton sing-along. And, the Billie Eilish prom song, I guess. But, for the most part, he’s curating “some good news.” (like he does in this episode below, curating recent COVID news from around the US). Plain and simple. Will brands do this now that Krasinski has shown them the error of their ways? My prediction: Doubtful. Advantage: Krasinksi.

As you can see, Krasinski had a lot of advantages over brands when it comes to producing content marketing–and he leveraged those to the hilt. Now, could brands pull this same kind of thing off? Sure. But, will they? That’s a completely different question. And, I think based on the basic analysis above, the answer is probably “no.”