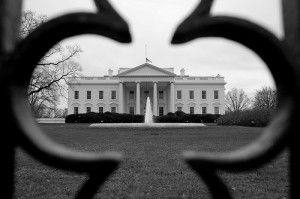 There are two topics I generally try to stay away from online for multiple reasons: religion and politics. Today, I’m making an exception to talk about the White House’s use of digital tools (although this post in no way reflects my political leanings in any way–just an analysis of the White House’s use of social tools for PR/communications purposes).

We all know social media played a prominent and effective role in the President’s road to the White House two years ago. But, what role have digital tools played in Mr. Obama’s presidency since then?

Unless you’ve been living under a rock, you’ve probably noticed the White House is very active online, including:

They also have a well populated iTunes page full of video and audio podcasts, which is interesting. Yeah, they have the weekly address from the President there, as you might guess. But, they also have a number of other interesting podcasts you can subscribe to: Press Briefings, Events, and even a video podcast devoted to the music of the White House (cool little jam from John Mellencamp and a host of other musicians in there).

It’s interesting to see the White House using LinkedIn since they’re not technically a business. But, they are starting important conversations within their group about issues relevant and important to the American public and the business world–Wall Street malfeasins, the BP oil spill and health care reform for example.

All of this is great, but one thing concerns me a bit: I didn’t see too many responses from the White House.

In fact, as you review White House activity on most of these networks, that becomes obvious pretty quickly. They’re starting the conversations–they’re just not publicly participating in them online.

In the Twitter stream, you see a lot of tweets and retweets of other government organizations. But absolutely no replies.

On their Facebook page, you see regular posts about important issues to the American public. And, you see upwards of 200 comments on each post. But, you won’t see the White House weighing in. And, it appears they’ve constrained the public’s ability to post to the wall (maybe rightfully so–with the amount of posts they’d likely get, it would be heavy noise).

The White House blog includes a variety of great posts addressing important and relevant issues like the BP oil spill and health care reform. The posts include video and photos–and the site is well organized. But, I’m not sure I see a single comment. In fact, it appears as thought they’ve completely disable comments. Result: No public discourse on the one tool that should encourage it.

So, as much praise as folks have given the White House for using and adopting social tools, are they really using them strategically and to their fullest potential?

At the risk of having the CIA show up at my doorstep tomorrow, I might argue that the White House is missing the boat just a bit when it comes to using social tools to help them further their goals and objectives.

Isn’t one of the key tenets of a democracy two-way discussions? Communicating AND listening (and then responding and discussing).

Doesn’t the White House have a great opportunity to foster a meaningful forum for the topics and issues of the day here? They’re doing a fine job of starting those conversations–they’re just not participating in them. And, you could argue that’s the most critical piece.

Yes, we want to have public outlets to share our thoughts and opinions on these kinds of topics. But, we also want to feel heard. And, when no one’s publicly responding–well, how do we really know they’re listening? How do we know what (if anything) they’re doing with the feedback we’re providing? Isn’t that an elected public official’s job after all? Listen to your constituents and represent their best interests, right?

Yet the two-way conversations are virtually invisible on the White House social sites.

Wait, but maybe one-way communication and listening is their strategy, you say?  Fair enough. But again, I would say that opening up two-way discussions should be a key piece of their strategy–of any public official’s strategy. People want to be heard. They want to see their ideas acted on. Just like they do when they go to work each day.

So, what would I do differently if I were counseling the White House (did I really just say that?). Below are a just a few ideas:

* Be a man of the people. One of the arguments many are sure to throw up given my suggestions: the President surely does not have time to respond to 243 comments on a Facebook post each day. Fair enough. But, does he have 3 minutes to respond to a couple over the course of a day? Why does that matter? Because if he responds to a handful a day, that demonstrates he is listening and weighing in, as he has time. Hey, we all realize he’s a busy guy. I don’t expect him to troll Facebook and Twitter all day long. But, if he were to publicly respond to just a few messages and comments a day–well, that would go a long ways with me, Mr. Obama.

* Give us a real behind the scenes look at life in the White House. Without compromising national security, why not give Americans an inside glimpse behind the velvet rope. Show us the “real” White House. Give us a mix of official behind-the-scenes-type work (they already do this to an extent) and some personal flavor. For example, what does meal time look like for the Obamas each night (you laugh, but people would be interested in that stuff). What does the President and his family do in their free time? How about interviewing the chef that cooks for the President each day? All of this would allow people to form a deeper connection with the folks in the White House. And build trust. And, it’s that trust that’s so vital as we open up conversations and discussions about the topics that really matter.

* Blog to improve policy. Think about how much smarter the administration could get by opening up comments on the blog and actually asking for the public’s opinions on key issues. I mean, a clear and direct comment policy would be key (they’d get tons of extremists and fringe folks), but save for that, it would be great way to get all the issues on the table in a very public forum. Sure, there would be some disagreements–probably a number of heated ones. But, isn’t that what we want? Isn’t that what we need? In many ways, we need some serious change (not politically, just fundamentally) in this country–and that’s not going to happen by doing things the way we’ve always done them. Let’s shake this thing up. Let’s take some risks. Let’s do a few things differently. That all starts at the top.

What do you think? Should the White House participate more publicly online? If so, what should be their approach? What are your ideas?