Home Blog Uncategorized Where are the brands standing up for George Floyd?

Where are the brands standing up for George Floyd?

Earlier this week George Floyd was killed by the Minneapolis Police Department. By now, you’ve seen the video. You’ve probably also seen the aftermath–here in Minneapolis and in spots across the country.

My family lives 16 blocks from where Floyd was murdered. We visit a restaurant just a few blocks from there often. We bike by there often. This is our city. And, it’s burning this week. I am keenly aware of the larger issue here, but today I’d like to talk about brands’ response to this issue because there’s a lot to talk about there, too.

For the last couple years, we’ve all heard about the trend that brands need to start taking stands on social issues like this. We’ve seen Patagonia take on the President of the United States around the environment and public lands. We’ve seen Ben & Jerry’s champion the Black Lives Matter movement (again this week, in fact).

And, we’ve seen numerous reports from vendors and agencies like Edelman telling us 1 in every 2 customers is a “belief-driven buyer.” And, of those buyers, 65% will not buy from a brand because they stayed silent on an issue it had an obligation to address.

Those are some powerful stats, and we’ve all kinda had this nagging thought in the back of our heads: Is that really true? Will people completely ditch brands who don’t stand up for big issues like racism and systemic killing of black men by police forces?

I guess we’re about to find out.

So far, I haven’t seen a lot of brands taking a big stand on this issue.

Locally here in Minneapolis, the University of Minnesota issued a statement saying it will be scaling back its use of the Minneapolis PD for events and functions. That’s a big step. However, curiously, the U of M didn’t share this statement on any of their primary social channels. 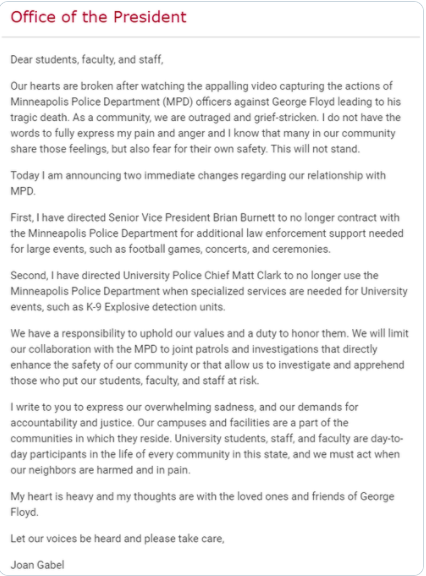 Best Buy wrote this blog post about the events. It’s not exactly taking a big stand, but they do address the issue.

The Twin Cities YMCA (disclosure: I am a member), shared this tweet on Thursday. Definitely taking a stance, and definitely sharing ways to move the ball forward. Well done, YMCA.

The Minnesota Vikings released this statement on Wed., and while it takes a stand, it’s not a very hard one. And, as statements go, it feels pretty cold and sterile in a time that needs quite the opposite. 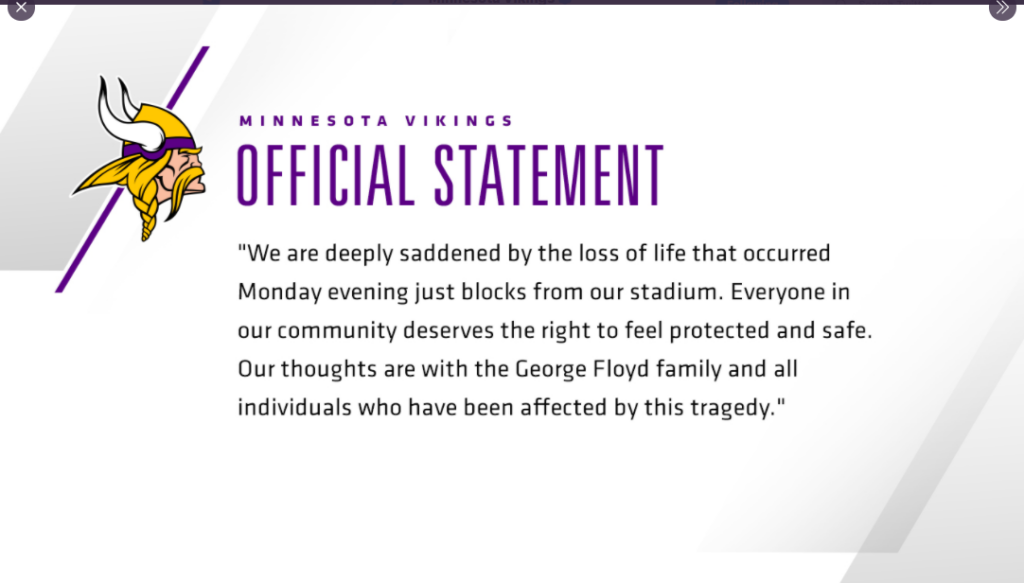 And, there is this official statement from Children’s Hospitals & Clinics in Minnesota along with area CEOs.

I have to say, one of the best stands I’ve seen taken by a brand is the one taken by a local restaurant, Guavas Cuban Cafe. The cafe will no longer serve the Minneapolis Police Department. Ladies and gentlemen, THAT is a stand. And, I applaud Gauvas for it.

But, many of the biggest and most visible brands have been eerily silent.

In fact, many of the biggest brands seem to be posting in a “business as usual” cadence this week, which seems very odd considering what’s going on in here in Minneapolis (and, in other spots across the country).

I’m not saying all Fortune 500 brands need to weigh in. But, given the research we’ve all been bombarded with the last couple years about “belief-driven buyers”, and the fact that this a pretty big cultural event and tragedy, it feels very weird, and bordering on tone-deaf for these companies not to address the elephant in the room.

Curious: What do YOU think? Especially for those of you who live in Minnesota. Should brands be taking a stand on this very tough, very complex issue? Why have so many stayed silent during this terrible time? I’d love to hear your thoughts, too.