Home Blog Uncategorized When is it OK to charge for content? 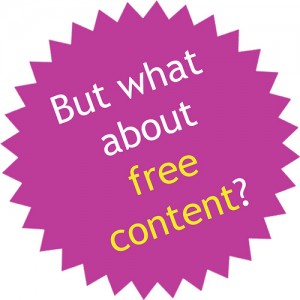 It’s not a new issue. In fact, it’s been going on far before social media burst on the scene. When is it OK to charge for content?

On the other hand, online publishers like MarketingProfs and Mashable probably give away more useful content than they should each day–but, it’s all in an effort to make money in other ways, obviously (advertising, events, memberships, etc.) Heck, even solo consultants give away a ton of free content–see Jason Baer and Jason Falls’ blogs and e-newsletters–in an effort to drive business (sign up for those two e-newsletters now, if you haven’t already, by the way).

Yesterday, right here in Minnesota, we had yet another example of this debate when our very own Social Media Breakfast chapter decided to start charging for events ($10+tax). My friend, Paul DeBettignies blogged about his reaction yesterday (check out the comments). Reactions were mixed, with more folks falling on the “it’s definitely worth it” side–at least initially.

Want examples? How about Harvard Business Review? What about The Huffington Post? Heck, what about TED?

All examples of organizations that pride themselves on top-shelf content. And, audiences (and dollars) have followed.

One issue at play in all this is the notion that, thanks to the social Web, more people expect more for free these days. But think about it: Don’t you pay for content in other areas of your life?

What about your trade organization? You certainly pay for content there (PRSA, AdFed, MIMA, IABC, AMA).

What about your newspaper subscription (yes, some people do actually still read the hard copy newspaper)? Definitely still paying for that (although fewer and fewer people are).

What about books? Those aren’t free.

So, why do we make such a big stink when it comes to online content and events like our Social Media Breakfast right here in Minnesota?

Sure, there may be some other factors at play with the SMB issue locally (should it be a volunteer-led organization, or a more professional organization?), but in the end it really comes down to content. If SMB is providing quality content–I’m going. If they’re not, I’m not. It’s not rocket science, right?

Care to weigh in? When is it OK to charge for content?