Home Blog Uncategorized When are we going to learn: Failure = Growth and learning, not a fireable offense

When are we going to learn: Failure = Growth and learning, not a fireable offense

Back in January, you may remember, PBR made this tweet:

It set off a firestorm of responses and media coverage for PBR. And, it also resulted in PRB firing the social media manager who made the tweet.

Or, years ago, many of you may remember a tweet from the Houston Rockets that included a gun and a horse–see below. 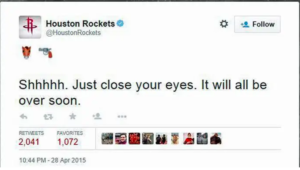 This tweet also resulted in the firing of the social media manager responsible for it.

And earlier this year, Southwest Air tried to have some fun with a string of tweets, conceivably from one of their interns.

I wrote about this from a different angle earlier this year, but it was yet another example of a disturbing trend our industry–and world–has been perpetuating for years.

We’re no longer allowed to fail.

In the two instances above, the failure led to firing. In the Southwest Air example above, as with MANY examples over the last few years, the “failure” (if you can even call it that), led to public shaming by the industry.

It’s consistent with what we’re seeing in society right now. Make one mistake and you’re “cancelled.” Isn’t that where we’re at? I see it at my kids’ school. I see it on the news. I feel it online every day.

We’re no longer allowed to fail. At least that’s what society is telling us right now. Make a mistake and not only will you be called out publicly, you may be fired and held accountable for years to come.

What kind of environment is that? Not one that encourages risk-taking, I can tell you that. And, in our industry, that’s a BIG problem.

Why? Because risk-taking wasn’t exactly common to begin with. Especially in social media marketing. Oh sure, you see the Wendy’s and NASA’s of the world taking calculated risks every week. But, for every Wendy’s there are tens of thousands of companies who are mailing it in each week on social taking exactly zero risks. And why? Because they don’t want to face the wrath of the internet. The social media manager doesn’t want to get fired. We’ve created a culture where fear rules–and risk-taking has been almost eradicated.

Let’s go back to the PBR situation for a second. Now, I don’t know all the details involved–for sure. I don’t know the personal dynamics at play. However, it was one tweet. Yes, it was a mistake. But, you could also argue he was doing his job. After all, the tweet did drum up a ton of awareness for the organization. Big picture: PBR could have seen that as a teachable moment, which is what it was. Again, I don’t know all the details behind-the-scenes–maybe the guy was difficult to work with to begin with. Who knows. But, it certainly seemed like overkill. And, it’s not an action that’s creating an environment where people are comfortable taking big risks–the kind of risks we should all be taking to help our organizations achieve their social media goals.

For years, I was someone who would pile on a little when these social media mistakes were made. I did. And I feel badly about that. A few years ago, I started to make a concerted effort to change that. I still talk about some of these brand failures from time to time (I talked about both situations I mentioned above), but in a much different way. There is no shaming. There is no slamming. These are learning experiences–for us all. We have to start looking at it that way.