Home Blog Other|PR What if The Walking Dead’s Rick Grimes were a PR pro?

What if The Walking Dead’s Rick Grimes were a PR pro?

Since the move to sever my cable, I’ve relied heavily on Netflix for my TV show viewing. Earlier this year, I started watching the best show on TV (Breaking Bad). Then, I wandered into Sherlock (another REALLY good show). Now, it’s Walking Dead. 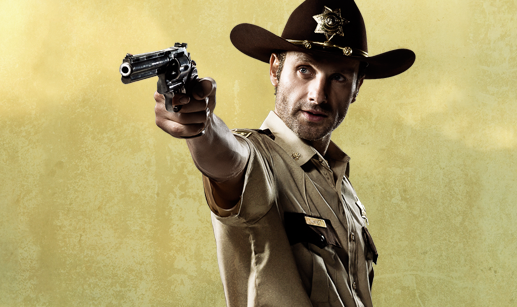 I’m not a huge zombie genre fan. Never seen the Evil Dead. Don’t have any interest, to be honest. It’s not the zombie stuff I love about The Walking Dead–it’s the storylines. And, the acting is pretty solid, too. The zombie gore has been taken to a new level the last year or so, but the storylines still prevail (love the new Governor/Woodbury storylines this year).

The primary protangonist of the show so far has been Rick Grimes, the small-town sheriff. Great character. Full of conflict (his best friend slept with his wife when they assumed he was dead). Leadership challenges with the group. Complex.

But, what if he were a PR pro instead of a cop?

I just blew your mind, didn’t I?

Think about it though.

Well, I guess if Rick were a PR pro, he’d probably be long dead by now. After all, PR pros aren’t known for their expert marksmanship 😉

But, let’s play along and pretend he did survive beyond the first 5 minutes of the show. How would he behave? What actions would he take? What dialogue would he have? What bonds would he form? Be honest, you’re curious now, aren’t you?

Here’s how I would see Rick Grimes as a PR pro on The Walking Dead:

This is one of the big misses of the show. You’re telling me our society is going to go from one that’s completely addicted to electronic technology to one that gives up on it within a couple months? I don’t think so. PR pro Rick Grimes would always be searching for a signal for his iPhone (that’s another thing–PR pro Rick Grimes is definitely an iPhone guy). It would be at least season 2 before he gave up on that.

Another big miss of the show (but I get it, suspended disbelief and all). PR pro Rick Grimes would ask A TON of questions, wouldn’t he? PR pros are inquisitive by nature–they ask QUESTIONS! For example, why hasn’t anyone asked more questions about the zombie blood and if it’s contagious or not? What about others from outside the area? They bump into those guys from Philly in season 2 and they hardly ask any questions about what’s happening elsewhere in the country? I mean, people have QUESTIONS dammit!

I’ll admit, Sheriff Rick is pretty organized. Tight formations for zombie attacks in season 3. Strategies for finding food. He’s relatively organized for a cop in a post-apocolyptic world. But PR Pro Rick Grimes would take things to a whole new level. He’d have detailed spreadsheets for lookout shifts. He’d have gantt charts for work shifts when they lived on the farm in season 2. Heck, he’d probably even have a daily to-do list for each member of the party full of items like “Kill 25 zombies today” and “Clean Daryl’s arrows” (which have struck approximately 1,436 zombies by season 2).

PR Pro Rick Grimes would be a relationship-builder.

Don’t you kinda get the feeling he’s doing the opposite in the show? Killing off fellow humans (in season 3). Running from other humans (in season 2). And leaving people for dead in a city full of zombies (season 1). PR Pro Rick Grimes would be forging relationships non-stop. He’d be building alliances (Survivor-style) designed to achieve agreed-upon goals. He’d be reaching out to new contacts to build a network of humans who can help each other hit those KPIs they set at the outset of season 1. I see this as a big area of improvement for Sheriff Rick Grimes.

PR Pro Rick Grimes would be a thought leader–even in a post-apocolyptic world.