On Dec. 31, I will retire from the Minnesota Interactive Marketing Association board of directors.

That sounds very official, but in reality, I’m just pulling back from commitments that fall outside my top two priorities at the moment (family+business). Sadly, volunteer opportunities like MIMA are falling by the wayside.

After two years of serving on the MIMA BOD, I’m stepping off and giving someone else a chance. 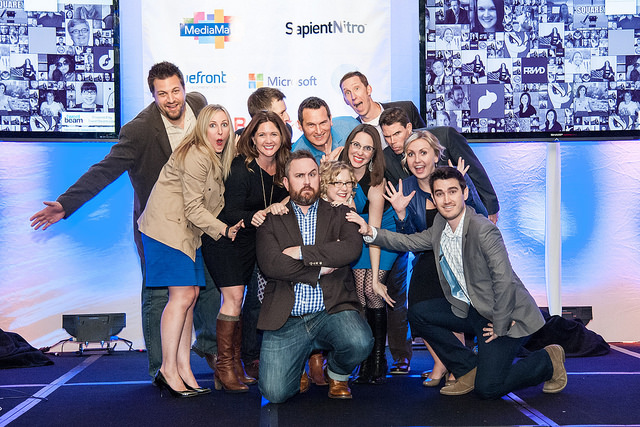 In those two years, I learned a TON. Like the fact that there are people, like one fellow board member who shall remain nameless, who are vehemently opposed to Bogart’s Doughnuts (one of the hottest donut shops in Minneapolis). Didn’t know that two years ago.

Or, that Nathan can actually do that thing above with his left eyebrow Didn’t know that two years ago.

In all seriousness, I learned a lot of great lessons during my two years on the board. And since some of you reading this post might be considering a board spot at some point in the future, I thought I’d share some of those learnings today. Here are six lessons I learned in the last two years on the MIMA BOD:

People are what matter most.

During the 24 board meetings I was a part of, we talked a lot about the “business” of running a professional organization. We talked about finances. We talked about revenue. We talked about how we were going to drive that revenue. But at the end of the day, professional organizations like MIMA run on PEOPLE. People who care about the community around us. People who are passionate about digital marketing–and MIMA. And people who care about doing great work. Getting more people INVOLVED with MIMA is what matters. The more people involved, the more successful MIMA will be in the years ahead. People like Kristin Koonmen, who’s been a volunteer with our Summit committee for a number of years. People like outgoing president, Nathan Eide, who guided our ship for the last two years. People like Jamie Plesser who currently lead our fantastic programming efforts with the help of a rock star committee and people like Mike Bjorkman, Ashley Zeckman, Emily Rinde, Stacy Aase and Tyler Patterson. People like former president, Tim Brunelle, who routinely feeds us ideas and gives us feedback even thought he’s put in more than his fair share of time over the years. People like Whitney Johnson Larson, who leads our fantastic marketing committee. People like Mark Jenson, who I seem to see at almost every MIMA event. People like Kat Duncan, who single-handedly led our sponsorship efforts the last few years. People like former board member, Lauren Melcher, who was instrumental in Summit efforts for many years. Those are the kinds of people who make MIMA, MIMA. And, we have to be constantly looking for these kinds of people. Because THEY will be the future of our organization.

Years ago, I sat on the PRSA board here in the Twin Cities–another great experience. But, it’s funny. A lot of the challenges and topics we talked about at the MIMA board meetings were the exact same topics and issues I remember talking about with PRSA. Different angles, obviously. Different audiences. But, the same topics.

People want to be ASKED.

One interesting thing I learned during my time on the PRSA board years ago, held true during my time on the MIMA board. People want to be ASKED to participate. Doesn’t seem like a big deal, but trust me, it is. You still want an open call for volunteers in regular communications–you will definitely get good people in through the front door using that approach. But, you’ll have much better success asking people to volunteer. Why? Because people will be flattered. Because those people are directly connected to someone who is already volunteering. And, because expectations are different when someone you know asks you to volunteers vs. someone who randomly opts in. It’s a strategy that worked really well for me over the last two years. In that time, I asked the following folks to be involved in MIMA in some way, shape or form: Holly Spaeth, Matt Woestehoff, Bryan Vincent, Brad Spychalski, Yuliya Crevier, Pat Schaber, Kaitlyn Cox, David Jungers, Erica Hanna, Sarah Hennen and a number of other folks. And, I’m so glad they all said “yes” 🙂

When I started recruiting people for the marketing committee a couple years ago, I wanted to be very clear with people: We are getting your time and skills. I want to make sure YOU are getting something in return. So, I would ask people what they were hoping to get from MIMA as a result of volunteering. Most responded with either “networking” or some form of “skills development.” When I’ve seen volunteering work best, it’s been a two-way street. The organization gets the skills, experience and time of the volunteers. And, the volunteers get SOMETHING in return. But here’s the thing–that sometimes doesn’t just magically happen. Sometimes, it needs to be facilitated. Sometimes, you need to ask people what they want–and then help them get it. Sometimes, you need to push people a bit to make sure they’re getting what they need.

Sure, boards like MIMA are designed to be “strategic” boards. Our jobs should really be to direct–rather than “do.” But, the reality is our board was part strategy/part tactics. I could see that early on. So, I chose to dive in and start “doing” as much as I could. Yes, I was sure to bring folks along and align with the board on key decisions. But, there’s a lot to be said for just “doing” when you’re working with a board that’s tasked with not only setting strategic direction, but also with helping carrying some of the water. One person I learned from early on during my board tenure: Lindsi Gish. If something needed to be done, Lindsi was quick to raise her hand and jump in. She did it with programming. She did it with Summit. She did it consistently. In large part, it was that “hand raising” that made Lindsi a great board member. Sometimes, there’s a whole lot of value in “just doing it”–even when you’re expected to operate at a strategic level.

One thing I think we struggled with a bit when I was on the board: Recognition. Sure, we gave it lip service. We thanked the right people. We applauded key efforts. But really, we didn’t do a great job of recognizing all the great people that made MIMA, well, MIMA. Not at the board level. Not at the volunteer level. Not even at the member level (although I think we’re getting better here). And here’s the thing: A little recognition would really go a long ways with most people who volunteer. A hand-written note. A heart-felt “thank you.” Man, even just a hug. True recognition makes a big, big difference.