This week, I made my bi-annual pilgrimage to Winona, Minn., to my alma mater. I head down there twice a year to speak to classes about the PR industry–trends, skills, the job search, my experience, etc. 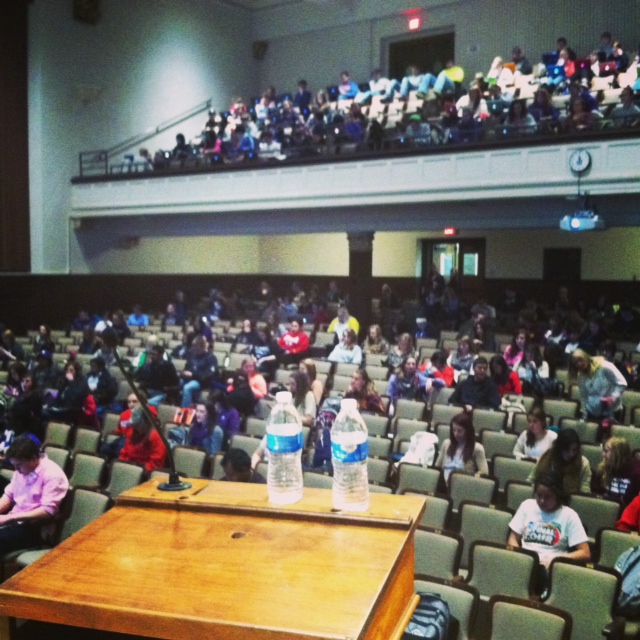 It’s always one of my favorite days of the year. I get to make the drive down and enjoy time on what I believe to be one of the truly overlooked campuses in our state.

This year, I spoke to three classes, including Dr. Tom Grier’s media class. It’s always one of my favorites, as Tom essentially interviews me for the presentation, which is a lot of fun. Plus, as a side benefit, I’ve gotten to spend some time with Tom the last couple years we’ve done this and I’ve gotten to know him much better (strangely, I didn’t have him as a professor when I was in school).

One question that came up in all three classes I spoke at Wed.: What was the most valuable thing you learned in college?

It’s a good question–one most students I’m guessing wonder about when a speaker comes to class. And, I think they’re usually expecting an answer that comes from the classroom.

But my biggest learnings in college did not come in the classroom.

That’s not to say my classroom work wasn’t valuable. It was. I had some great classes including our senior “campaigns” capstone class, which I still remember in fairly clear detail.

But, my biggest learnings came well outside the classroom. Here’s a quick rundown of those learnings–and how they helped me later on in my professional life:

Selling ads for the student newspaper

Sounds like a lame job for a college student, doesn’t it? Cold call after cold call after cold call. It was tough. But you know what, it paid. For a college student in Winona, I didn’t need much. Remember, for $10, I could have a pretty fun Thursday night in Winona (at the time). But, the real silver lining of this job was how it taught me to have no fear. One of the biggest challenges when I was young was to get over that fear. Of meeting new people. Of speaking up in meetings. Of pushing back on my boss. That job selling ads for the Winonan–it didn’t get me over the hump on all those fears. But, it certainly paved the way for me to get a jump on them.

Serving as a “beat reporter” for the women’s basketball team

I also covered the women’s basketball team for the Winonan for a bit. The women weren’t all that great at the time, but it was a lot of fun. I got to know the coach a bit–and the players. I even traveled with the team on occasion. But the most fun part of the job was writing on deadline. I had to watch the game, take notes, interview the coach and a few players, and then turn around an article in a few hours. It was a rush. And, it prepared me beautifully for the pressure of writing under a deadline in the workplace–something you become familiar with quickly when you get your first job. The skill of writing–and writing well–fast is huge in PR and marketing. People who write well are a dime a dozen. People who write well on deadline under pressure are not. Learn to do that, and you will be imminently employable.

Juggling four jobs at once

I didn’t have four jobs my entire college career. In fact, I only really started working DURING school my senior and “super senior” years. But, during those two years, it was intense. I had four jobs for most of the time. Two jobs with our student newspaper (see above). One job with a computer lab on campus. And one job with a local pizza place. That, along with a full course load, taught me the value of learning how to juggle a schedule and competing priorities. Obviously, this is a skill I use almost every day–and I started learning how to do it those last two years of my college career. Invaluable. And, as a result, I’ll probably be pushing my children to work, at some level, during their college careers.

Getting my heart broken

Without question the biggest “event” in my college career–and also the one that set my life in an entirely new direction. I had been dating a girl I met in high school for four-plus years. We had followed each other around. And we were finally together again at Winona my senior year when she broke my heart and started seeing another guy. At the time, I was crushed. Beyond crushed. I didn’t eat for weeks. Didn’t sleep. Wanted to see her all the time. It was horrible–as anyone knows who’s had their heart stomped on. But you know what? It was the best thing that ever happened to me. It was painful–yes. But, it made me so much stronger. Through pain, I found strength. And, that was a valuable lesson I fall back on to this day in my professional (and personal) life. When there’s pain (or failure), I know my strength will carry me through–just like it did during that period in my young life.

So, that’s what I learned in college. What about you? What did you learn in college that you didn’t learn in a classroom?