This story starts a few months ago on KFAN’s Power Trip Morning Show. For those who aren’t aware, it’s the highest rated morning show in the Twin Cities comprised of a cast of thousands, but really run by Cory Cove, “Meat Sauce” (Paul Lambert) and Chris Hawkey (part radio star/part rock star). 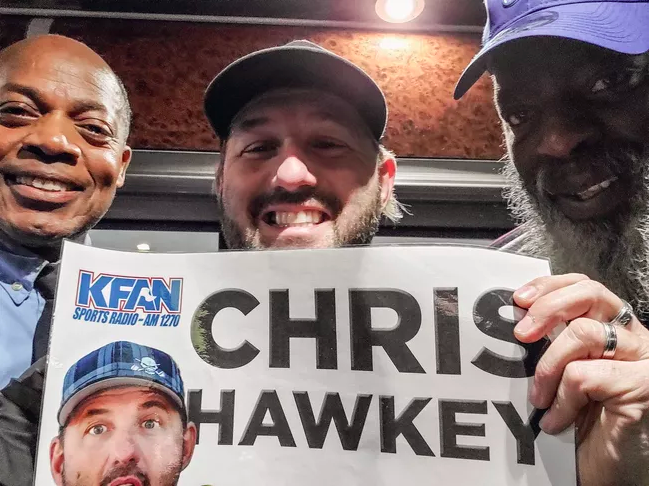 For the last few years, they’ve been “competing” in something called the #CharchChallenge, named after the game organizer, fellow KFAN contributor, Paul Charchian. The challenge is simply to pick fantasy football players that will outperform the player not picked by anyone (the “ghost” as they call it on the show).

And, at the end of each year, the loser of the #CharchChallenge is essentially forced to do a fairly uncomfortable thing. One year, Cove grew his hair out for a year. Another year, Hawkey and Sauce were sentenced to dress like a pirate on the steps of US Bank Stadium. The stakes seem to raise each year.

And, this year, the loser (Hawkey) was sentenced to ride a bus back from Vegas, where the Power Trip had been recording live shows just last week (March 28-29). As you can imagine, that wasn’t a pleasant experience–especially after being in Vegas drinking, gambling and generally staying up all night for four straight days.

But, Hawkey jumped on a Greyhound bus on Sunday, March 31 and began the long road home to Minneapolis. And, the tweets began (Hawkey is one of the bigger personalities on Twitter on KFAN, so him tweeting non-stop about his experience wasn’t out of the ordinary).

Dear @GreyhoundBus really glad that I paid extra for priority seating just to have a lady at the counter tell me “that don’t matter.” (Direct quote). I’m in the next to last row. Also, the electricity doesn’t work on this bus either. Terrible #CharchChallenge #HawkonAGreyhound pic.twitter.com/cs26M5DFbd

Not surprisingly, it didn’t get off to a great start. And, by the time he hit Nebraska, Hawkey was hitting the wall and tired of what you would expect were less-than-ideal cross-country bus conditions. But, when he got off the bus at Omaha, something happened.

That’s right, one of Greyhound’s chief competitors, Jefferson Lines (based right here in Minnesota), sent a shiny, new coach bus to pick up Hawkey and get him home in record time.

What’s more, Jefferson Lines included a number of added “extras” to make the trip a bit more tolerable (hello pizza!). They also included a couple “how to win at Fantasy Football” books–a clear, good-natured jab at Hawkey and the reason he had the ride the bus in the first place!

Checkout the SARCASTIC GIFTS the @JLBus crew had waiting for Hawkey on the bus!! 🤣👏🤣https://t.co/atNoc1nGrT

Of course, as you can see, Hawkey was tweeting about this entire experience as it happened. Then, upon his return on Monday, he talked about it (at length) on the Power Trip Morning Show. You can listen to the full show here, if interested.

And, after that, it’s been a flurry of other KFAN accounts and celebrities retweeting and interacting with Hawkey and this crazy story (including Ben Leber, another Power Trip guest with 87,000+ followers.

In the end, a simple operational execution (sending one bus to pick up one guest in Omaha) landed Jefferson Lines a crap-ton of media impressions and engagement across Twitter and mainstream media and radio.

Just absolutely beautifully done by the Jefferson Lines team. Really couldn’t have been done better. And, I see a few key lessons for brands looking to learn a thing or two from how JL pulled this off:

1: Always be paying attention–and be ready to act!

Apparently, a few folks at JL were fans of the Power Trip Morning Show (including the CEO, who started all this!). Not surprising, given its popularity. But, they were listening! Anyone who has been listening to the show knew about the #CharchChallenge and knew Hawkey would be riding this bus home from Vegas. All JL had to do was figure out a creative way to insert themselves into the picture. They acted. And all it cost them was a little time and a bus.

2: Put influencers in position to create content–and get out of their way

With modern-day influencer marketing, I feel like some companies are getting a little too prescriptive with what they want influencers to create. I mean, part of the reason you’re partnering with these folks is that they know how to create content a bit better than you do! JL was smart to set the environment (give Hawkey an express ride in a shiny new bus) and let him do the rest. With no direction, he created a number of tweets (including the video up top) and obviously shared his story on the radio Monday (and, as a bonus, he’s bringing the guy he met on the bus on the Power Trip Show on Tuesday, too–and I just listened as he brought the Jefferson Lines folks on the show to talk about the behind-the-scenes work). That video tweet he shared now has more than 3,200 likes, 280+ retweets and 280+ replies. And again, the Power Trip Morning Show is the highest rated morning show on the air in the Twin Cities right now.

3: Sweat all the details

JL could have just sent the bus to pick Hawkey up, and even just that move would have been great. But, they sweated the details. They included the pizza–they knew he would be hungry (duh!). They added the fantasty foodball books–they wanted to have some fun with him, given the show’s personality (and the fact that Hawkey is typically the punching bag for the show). They added the personalized toiletries (knowing he would full well check the bathroom–again, personality of the show shining through). Those details were all more content opportunities for Hawkey–and he took advantage each and every time.