The automation rebellion is coming

Earlier this month, I attended a local mastermind meeting I help run and the topic of automation came up–this time, the discussion focused on chatbots. One of the participants made what I believe to be an astute observation:

“Are we on the precipice of a huge rebellion when it comes to automation?” 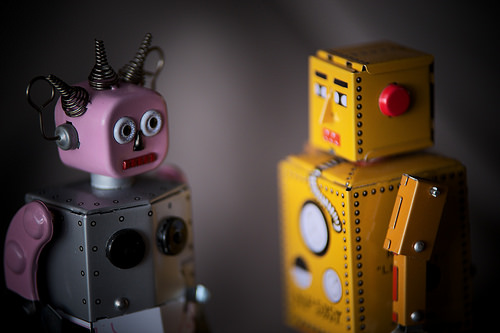 What he meant was, will we start to see brands embrace more one-to-one and authentic communications in 2017 instead of trying to do everything “at scale”. Isn’t that what chatbots are all about? Automating communications that occur on a regular basis? In some cases, communications that people are used to getting from a real person?

I feel like the pendulum is about to swing WAY too far the other way–we’re on the verge of uber-automation.

We already see this in so many everyday experiences–customer service, specifically.

Everyone’s talking about chatbots and automation–but I tend to think we may see customers giving brands a serious stiff arm when it comes to automating communications in the year ahead.

Think about it. What’s one of the primary complaints we hear from consumers when it comes to brands and customer service and experience? “I want to talk to a real person!” Consumers are tired of phone trees. They’re sick of giving phones voice commands instead of talking to actual people.

They want to talk to a real person who understands their problems and can help solve them.

And more automation doesn’t fix that. It makes it worse.

I get that automation helps companies and their bottom lines. It helps streamline operations. It helps automate simple tasks that were once labor-intensive. It saves money.

I understand all that. And in some cases, it does make sense.

But here’s the thing: I don’t think consumers like it. And, in the age of the consumer, if they don’t like it, they will go elsewhere.

So, from a company perspective, all this automation stuff sounds great until you start think about the customer experience.

Then it starts to sound pretty awful.

That’s why I think we’re on the verge of a major consumer rebellion against automation.

I guess time will tell.