Home Blog Uncategorized The age-old question: Do you need to be active on social media to be successful in social media?

It’s the age-old debate (at least over the last 10 years!): Do you need to be active on social media channels to be successful as a social media marketing professional?

A Jess Smith post on Twitter about a month ago got me thinking about that question again. Because, historically, it has been a controversial issue. 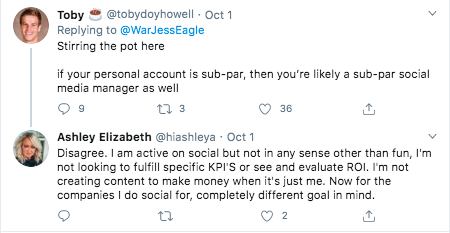 Some folks say “no, you don’t need to be active on social media to be good at this job.” And, I respect that opinion. In fact, I know plenty of people that are great at social media marketing but folks I don’t see on Insta, Twitter or LinkedIn all that often. It’s definitely not a prerequisite to success.

HOWEVER, I do think it can be a PREDICTOR of success–for a variety of reasons.

Again, this isn’t a black-or-white argument. I’m not sure there’s a “right” answer here. All I’m saying is if I were a hiring manager and I was looking for social media talent, an individual’s social media activity would definitely play into my decision.

#1: There’s a depth of knowledge you gain by immersing yourself in the platforms. Case in point, I know very little about Snapchat. Sure, I know the basics. I know how it works. I know the pros and cons of the platform. I even know about things like “Snap streaks” (which, if you’re 15, are HUGE!). But, I don’t have a huge depth of knowledge. I know enough to be dangerous, but since I’m not a big user, others would have a big advantage over me. Now, LinkedIn? That’s a different story. I spend 20-30 minutes every day on LinkedIn. I’m a power user. I know the ins and outs. I know what kinds of content resonate with people. I have depth of knowledge. So, that comes in very handy when I’m counseling executives on how to best use the tool. I believe there is a difference.

#2: Picking up the subtleties of the platforms. Again, tougher to do this if you’re not on there every day or so. Example: A while back I noticed @noraborealis (local MN folks will know her) was posting on Instagram, but with very, very long posts. At the time (maybe 5 years ago), this was fairly uncommon. After all, “snackable content” was the trend. But, here was Nora making these lengthy posts all the time–and people were really responding to them. Well, that was a subtlety. And, it quickly turned into a full-blown trend. I probably wouldn’t have known about that if I wasn’t checking Insta regularly and seeing Nora’s posts. Picking up on those subtleties matters. And, it happens more easily if you’re participating regularly.

#3: Getting in the weeds has benefits. Management-level folks will tell you, “I don’t need to get in the weeds. I have my people do that work.” The implication: I don’t have to get my hands dirty–I just need to know how to explain what my team is doing to others. That may be true–to an extent. But, actually understanding what your team is doing in those weeds is so much more beneficial. Example: Instagram just unveiled Reels–the competitor to TikTok. One of your team members manages Insta for your squad. And, she’s all over Reels. And, you publish a few. But then, senior management has questions. They come to you. But, you have no answers. Why? Because you’re not using Reels. You have no idea. You have a team member who handles that, so you have to ask her for more details. Now, this isn’t the end of the world–this scenario plays out daily. But, wouldn’t it be nice to have those answers yourself because you’ve been messing around with Reels already? Wouldn’t that look a little better for you with management?

#4: Yes, you can set strategy, but creative ideas will come from those who are immersed. Of course, this isn’t 100% true, but I believe the more creative social media ideas will usually come from those who play with the platforms more. I mean, think about TikTok right now. You’re telling me someone who spends absolutely no time on TikTok could create content that’s every bit as good (if not better) than someone who’s on it creating every day? I’ll take the person who’s immersed in the platform 10 out of 10 times on that one. In fact, I think that’s an absolute no-brainer.

OK, I laid out my case. Let the debate begin (again)! Do you need to be active on social media channels to work successfully in this business? Let’s have it out, folks!