A story in the Minneapolis Star Tribune over the weekend highlighted for me a trend I’ve been thinking a lot about lately:

The chasm between senior leaders and employees has never been wider–thanks (in a larger way than you might think) to social media.

The Strib story was about a incoming freshman at Concordia University here in Minneapolis and how she received a letter from the dean of diversity, Cheryl Chatman, inviting her to a diversity session in Aug. The student posted a portion of the letter on Facebook, highlighting the section that had caused her concern. 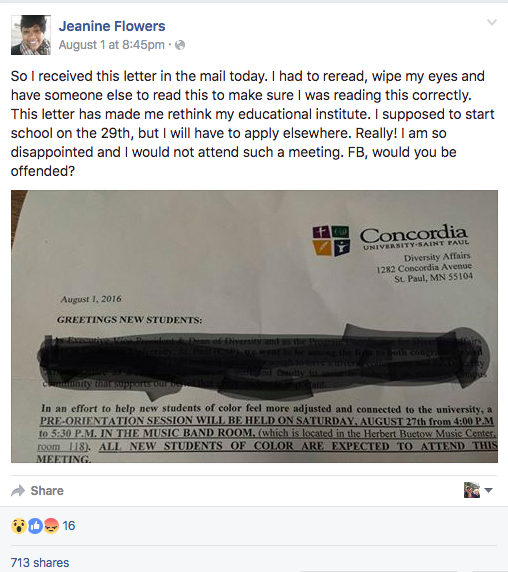 The post “went viral”–so much so, that the Strib picked up on it.

A couple days later, Concordia responded with a post of its own on Facebook and the Concordia web site from Chatman. 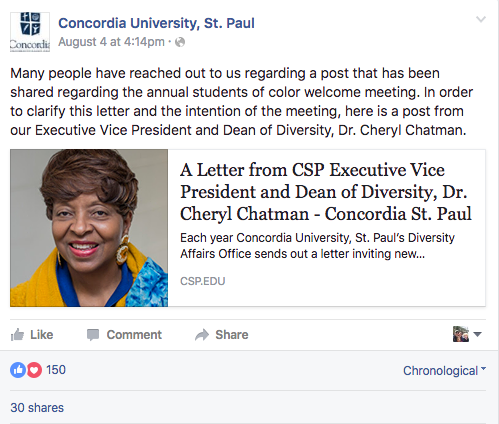 How does this illustrate my point?

A single quote from the dean in the Star Tribune piece:

“I’m not on social media,” Chatman said. “This is unbelievable to me.” (referring to the virality of the student’s initial Facebook post).

Chatman is not unusual. Like most executives at midsized to large companies, she is not active on Facebook, Twitter, Instagram, Snapchat or LinkedIn. I’ve written about this before (most of the executives with Medtronic, a HUGE med tech org here in the Twin Cities have no LinkedIn or social media presence at all).

And, take a peek at the retort from Chatman. Again, indicative of how executives respond to situations like this on social media. Sure, she responded, but it was in a long-form letter format (dated–especially when the initial “attack” came on a Facebook post); it came more than 48 hours after the initial post by Flowers (too slow in today’s news cycle); and the response felt a little stilted (very corporate-like).

I’m not looking to take shots at Chatman or Concordia (actually, I thought the Concordia PR team handled this pretty well from a comms perspective). But again, it’s indicative of a larger trend.

Executives have long been far-removed from the employee experience at large companies. I don’t think I’m breaking news there. And, as executive salaries have risen dramatically over the last 10-15 years, that disconnect has grown even larger.

Sure, execs work with corporate communicators to get in front of employees and communicate. But, those messages are often stilted and forced. If you’ve ever worked for a big company, you know exactly what I mean.

And now, social media is making it all the more obvious that execs are out-of-touch with today’s front-line worker. Not only do they live in different worlds (physically and environmentally speaking), they also don’t use anywhere near the same forms of communication (employees=text apps, social media come first most likely; execs=in person and phone probably the two main ways they communicate). Chatman’s quote above sums up a recurring theme–“I’m not on social media. I have no idea what people are talking about there.”

In today’s day and age, I believe it’s borderline dangerous for execs to be this oblivious. They can no longer afford to hide behind such claims. Sure, they can rely on their corp comms teams to keep them up to speed (which is clearly what happened here with Concordia), but since Chatman had no profile online, she had no platform to retort and open up a meaningful conversation.

Look, I’m not saying CEOs need to start being active on Facebook. Hardly the case. But, what I am saying is C-level execs need to start getting a clue. The bulk of your employees are active on at least one social media channel. How can you afford to not even have a single account if this is one of the key ways your employees are communicating now?

I’ll wait patiently for an answer.