Home Blog Uncategorized Take Seinfeld’s advice: Do the opposite.

Take Seinfeld’s advice: Do the opposite. 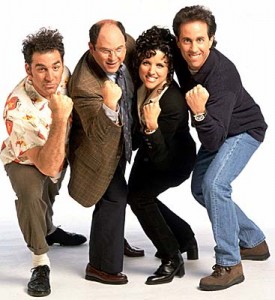 You remember the episode. George was struggling to meet women. He hopped from job to job. His life was in shambles. Jerry came up with a new concept: Do the opposite. The rationale: If George’s instincts were always way off, by doing the opposite of what he thought was the right thing to do, he would actually make progress. The results (while wildly unrealistic) were incredible: A new girlfriend and a high-level job wi.th the New York Yankees within days.

Jerry’s advice obviously worked for George, and I think it actually has significant applications in the social sphere, too.

Let me give you two examples:

* Avoid taking a defensive stance. Last week, BrightKite CEO, Jonathan Linner was interviewed by L.A. Times writer, Mark Milian. Brightkite’s community didn’t take kindly to some of  Linner’s off-the-cuff remarks about its perceived target audience. As a result, many Brightkite users weighed in with comments on the post slamming the CEO and his own comments. How did Brightkite and Linner respond? They allegedly started revoking access to those who had left not-so-positive comments about the start-up on the L.A. Times site. Yikes.

What if, instead of allegedly revoking access and appearing to act defensively, Linner himself had commented on the post apologizing and letting the community know what he really meant by his comments. Not retracting his statements. Just reframing them a bit. What if he had listened to the community and its feedback in the comments section and told them he’d be using that to update the popular application? In a situation where most would act defensively, considering the opposite and owning up to your statements, asking questions and listening intently may have went a whole lot further (note: Linner did end up apologizing on Friday, Dec. 4 on this post on the BrightKite blog).

* Give before you get. We’ve all seen them. The people who hop on Twitter and use it as a megaphone. They yell. The rant. They rave. And no one’s listening. They’re in such a rush to promote their skills, abilities, products or services, that they forget one basic premise of the social world (online and off): Give before you get. It’s that simple. There are countless examples. Again, both online and off. But, I think this principle in some ways plays more powerfully online because of the networked–and more public–nature of these platforms.

Most people’s natural inclination is to talk about themselves first. What they can do for you. How their products or services can make your life easier or better. While that’s all fine and well, I would argue you should do the opposite. Focus on giving. Help your customers, friends and colleagues. Solve their problems. Believe me, it will come back to you and your organization in the end.

What do you think? Does this theory pass the smell test? Do you have relevant examples you can share?