Statistical proof that sharing doesn’t work on LinkedIn for executives

We want our customers to share. More sharing means more reach. And most of us are graded out on how much reach we’re driving through our social media activities.

But, for executive leaders, is the share as powerful? Should leaders be sharing other people’s posts–and their brands’ posts–on LinkedIn?

Based on my research, the answer is a decided ‘no.’

Take Geoff Martha, for example. CEO of Medtronic. Very active on LinkedIn and one of THE case studies for larger companies in Minnesota about social media done right by a senior leader. 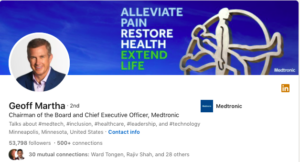 If I look at the last 10 organic posts he made on his own, they averaged 1,258 engagements per post.

Let’s look at Corie Barry–another wonderful example of a leader on LinkedIn and doing great things on the platform. 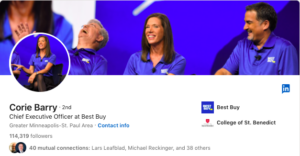 His last 10 shared posts on LinkedIn have averaged 5,042 engagements. Wow.

But, his last 10 organic posts have averaged 10,755 engagements.

Finally, let’s look at a local exec with a bit smaller following. If you’re reading this and your exec has a smaller number of followers, this will be more relevant.

Shelly Ibach, CEO at Sleep Number, has just a tad over 5,000 followers. So, not as big as Martha or Barry above, but also not nothing either.

For Shelly’s last 10 shared posts she averaged 37 engagements per post.

For Shelly’s last 10 organic posts she averaged 126 engagements per post.

Now, that’s just four execs. Hardly a conclusive study. But, I can tell you, from the many other execs and leaders I’ve followed on LinkedIn, it’s pretty consistent.

Now, that’s not to say execs shouldn’t be sharing brand posts or other people’s posts from time to time. I believe they definitely should.

There’s value in the CEO sharing the brand post from time to time (it should see more engagement when the CEO shares it, unless your name is Walmart or Microsoft).

And, CEOs sharing employee posts is always a win. It’s leadership 101–lift up those around you who make the organization so successful!