Tuesday was essentially a national holiday for many who worship at the table the coffee bean. Of course, it was National PSL Day. In layman’s terms, National Pumpkin Spice Latte Day.

It was the day Starbucks officially launched its signature drink (one of them, at least) to the world. It’s become a bit of a tradition the last number of years–usually around Labor Day.

But I’m guessing it’s a creative challenge to come up with new and interesting ways to play up this launch each year. This year was no exception. And once again, Starbucks did not disappoint.

To play up the launch, Starbucks showcase a live feed of a pumpkin patch on its Facebook page. 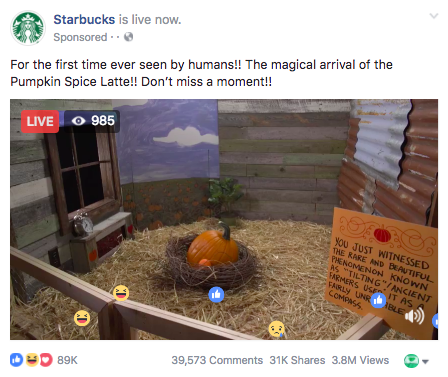 It instantly reminded me of IHOP’s infamous “Pancakes on a Beach” campaign that generated huge impression and engagement numbers.

And, much like IHOP, Starbucks was out to have some fun. Just check out the sign in the first FB Live post above: “You just witnessed the rare and beautiful phenomenon known as ’tilting’! Ancient farmers used it as a fairly unreliable compass.”

Now, I didn’t sit around all Labor Day weekend tuning into this live stream, but I did notice they were promoting it in the feed Friday-Monday. 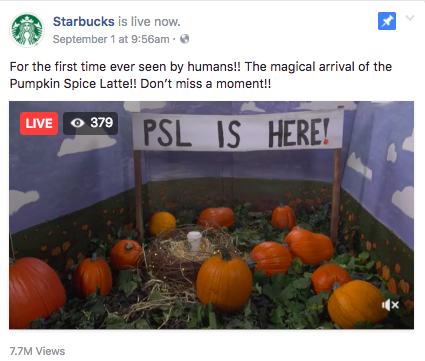 They even created a contest to name the first PSL of the season–and promoted it with a pinned comment on Facebook: 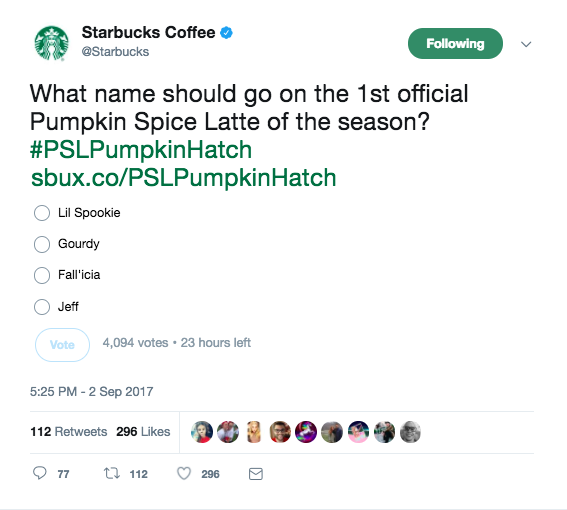 Any guesses as to which name won? 🙂 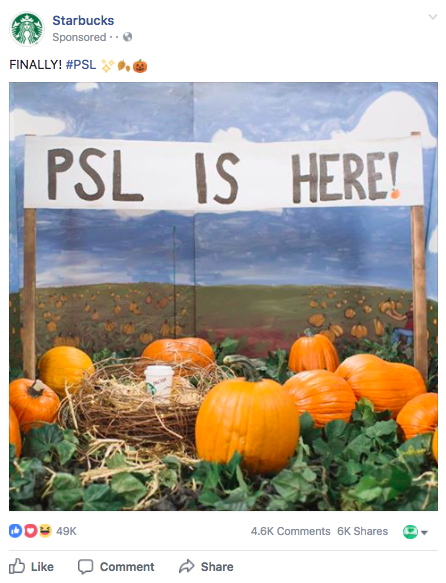 Was the social campaign a little on the cutesy side? Absolutely. Was it gimmicky? Yep. Was it effective in driving additional interest and a “I have to have my first PSL RIGHT NOW!” attitude among fans? Most likely.

Overall, a creative execution to an “event” that comes around every 12 months. I’ve said this before, but anytime you have a recurring event or launch like this, as a brand, it’s incredibly tough to do something creative and interesting each year. Somehow, Starbucks manages to always be pushing the envelope. So I say, kudos for that.

However, the PSL launch story has another side. Apparently, there was some confusion on the operations side of the business.

Some people were spotted with PSLs as early as Sept. 1:

But, distribution of the early PSLs was spotty at best–some locations had it, while others did not. Of course, this didn’t sit well with the passionate Starbucks fan base. And, as you would expect, many took to social media to complain about it:

@Starbucks Went to Starbucks and was told no #PSL till Sept 5!! Not happy

What happened? According to a subreddit, the Starbucks corporate office changed the release date and many locations didn’t comply.

However, three days later, and I’m not sure it mattered. A quick glimpse through Twitter and the Starbucks Facebook page, and all I can find are positive comments and people talking about how excited they are for #PSLSeason.

Operations snafu–looks that way. However, when you’re a brand that’s built up the goodwill that Starbucks has over the years, and you have a product that’s as popular as the PSL, you’re often given a pass. Plus, in this case, the excitement for the PSF just steamrolled over what could have been a much bigger “crisis-type” situation over the Labor Day weekend.

So, creative social execution or PR mess? Gotta side with the former in this case. Nice work, Starbucks. Just keep on pushing that social media envelope.