On Sunday, David Phelps of the Star Tribune wrote a post about Hormel and its relatively new social media campaign built around the fictional, animated character Sir Can-A-Lot. 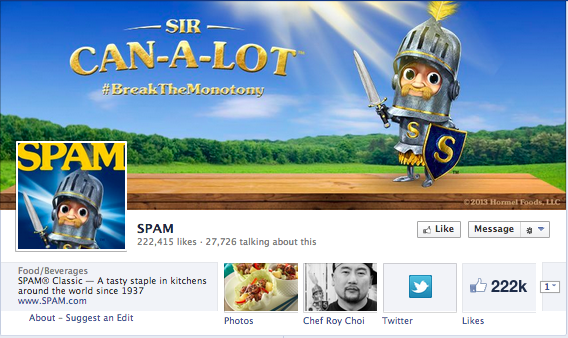 The big idea is somewhere between what Old Spice did with its real-time video campaign a couple years ago and Oreo’s recent “real-time marketing” efforts. According to Phelps’ article, Hormel’s agency, BBDO, scours the web each day for trends and timely events to insert “Sir Can-A-Lot” and build awareness (through volume, engagement, etc.) online (specifically using Facebook, Twitter, Pinterest and YouTube).

Videos featuring Sir Can-A-Lot play off March Madness, Dancing with the Stars and the World Baseball Classic, as of late. The videos typically run between 15-25 seconds and according to Phelps, are produced in tandem with an animation shop in Portland. The BBDO team says the process is a lot like a “newsroom.”

It’s certainly a creative approach–one that has big ad firm written all over it (check out the Twitter bio below–that says it all).

From a results perspective, it may be working (they don’t disclose many hard metrics in the story). But, from where I sit, this campaign looks a little far-fetched and less than impressive. Here’s why:

If you’re going to go with a fictional character like this and make an attempt at humor, it better damn well be funny. These videos aren’t funny (see the video below playing off Twitter’s 7th birthday). This is why so few brands pull humor off. And I’m surprised at the number of brands that continue to try humor as a way to sell products and services. It’s just too hard. Old Spice pulled it off pretty well. Sir Can-A-Lot does not. What they’re banking on here is the “shareability” of these videos. They need to be funny enough for people to WANT to pass them along. Take a peek. Would you share any of these videos?

What most people are missing about the Oreo campaign is what made it work: Brilliant visuals. The “real time” piece of it wasn’t the genius–it was the visual representations they came up with that made them work. Think back to that first visual–the one that celebrated Gay Pride Day. That had nothing to do with “real time marketing”–and it had everything to do with using their product in a creative, visual new way on a medium where they knew they could capitalize on it. The Sir Can-A-Lot videos feel forced. And yeah, they’re trying to take advantage of timely events like March Madness and Dancing with the Stars. But those aren’t natural fits for Spam (and they’re hardly alone here–so many brands going down this path needlessly now).

Stick to the basics

The real shame here is the Sir Can-A-Lot campaign is detracting from other content that could work just as well–if not better. On Facebook, take this recipe suggestion from Roy Choi (who apparently is the Godfather of the food truck movement–this was news to me). 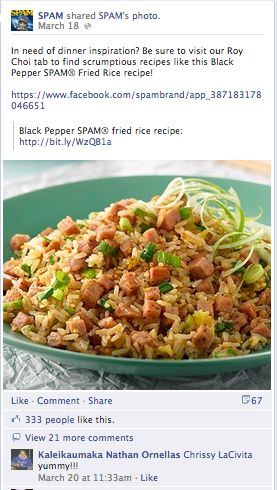 On Pinterest, Spam has boards that feature vintage ads (love some of those) or 75 years in cover images (very retro) or Punch up your Lunch! (much more relevant and–get this–USEFUL!). These are all far more relevant and shareable for the average fan.

It’s these, more basic and useful, ideas that I think could work just as well for Spam–without the “creative” elements.

Price tag is (probably) too hefty

This is some educated guesswork on my part, but I’m guessing a creative campaign of this magnitude is costing Hormel a few bucks. Nicole Behne, senior product manager for Hormel says, “Social media allows us to target our message to a narrower base of consumers that have a higher likelihood of buying this product, which makes it more cost effective.” I wouldn’t argue that, but I would ask Nicole what she’s comparing it to when she says it’s “more cost effective.” When you line it up against a major ad campaign–yeah, this would certainly be cost effective. But when you add up the time and resources it takes each day to produce a couple of these 15-second videos–I’m guessing that’s not exactly cheap. Again, why not stick with the basics? May work just as well. Build more long-term value (the animated character won’t do that). And, it’ll hurt less in the pocketbook.

Those are my initial thoughts. Anyone else notice this campaign? What do you think? Working–or lacking?