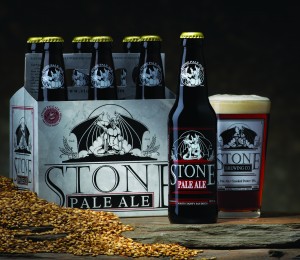 So, I set out to dig in to some of the micros that were really making headway with social tools. What I found was pretty surprising: There weren’t a lot of success stories out there. My guess? Most micro-breweries don’t have the time or resources necessary to devote to social media. And even those that do (I’m thinking about Surly locally) don’t necessarily use it because they might not want to grow beyond “micro-brew” status (i.e., they don’t NEED social media).

But, I eventually did track down one micro-brewery that I believe is really making headway in the social arena: Stone Brewing. Below is a short interview with Jacob McKean, social media lead for Stone Brewing. Jacob will be speaking as part of a small business panel at BlogWorld May 24-26 in New York City (disclosure: I am the co-track leader for the Social Media Business Summit).

Q: You’ve mentioned that Stone Brewing doesn’t do any advertising. Can you talk a bit about what led you to that strategy and why you continue to spend so much of your time and resources online?

A: That decision was made very early on, long before my time here, but basically the feeling was/is that advertising is something best left to the mega-brewers. In 1996, our co-founders asked themselves, “Have we ever seen an ad for good beer?,” and their answer was a definitive no. Other than the word ‘beer’, we have virtually nothing in common with the mega-brewers, so why imitate their strategy? At this point, if we were to start advertising, it would be like slapping a giant neon sign on the hippest speakeasy in town; it wouldn’t make any sense.

More recently, with the digital communication platforms that have become available to us, we’ve been able to speak directly to our fans and cultivate a community of aficionados. That community is excited to engage with us and hear about our news as soon as it becomes available, which is a far more effective way to spend our time than advertising. It’s all “opt-in” and that will always be a more powerful tool than forcing people to look at your ad. 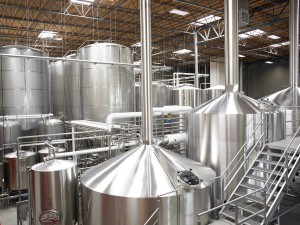 Since you do devote so many resources to your social and online efforts, I’m guessing it’s working. Can you talk a little about the results you’ve seen so far? What’s been effective and what hasn’t (and what you learned as a result)?

A: We’ve had tremendous success with our social media. When I started in January of 2010, we had 18,199 “Likes” and around 12,000 Twitter followers. Today, we have 85,329 “Likes” and 29,036 Twitter followers, and our blog is (often) among the top 10 most read beer blogs on the web. I believe that success is due in large part to having high standards for content. If the material is compelling and it’s compellingly delivered (i.e. funny), it works. Sometimes we have to check ourselves and make sure we’re delivering information that is interesting to our fans and not just us. Because it’s pretty much all interesting to us.

In the alcoholic beverage industry, you run into many of the same challenges that regulated industries like health care and banking face. Yet, you’ve had good success. What’s been your secret?

A: Yup, beer is the most regulated item in the country. There are highly specific regulations regarding what we can say, what pictures we can use, what our labels can look like, and of course, how we can sell our beer, among a million other things. And all of those issues are regulated at the state and federal levels, so it’s like there’s 51 versions of those regulations. Obviously, I’m constantly learning new things.

Fortunately, we make incredibly good beer and have a sense of humor about things. And that’s really the key. We have a large, organic fan base that likes to hear us speak in our authentic voice. So I try to deliver that.

To me, social media seems like a perfect fit for resource-strapped craft brewers like Stone. Yet, I still don’t see all that many that really use the tools effectively. Why do you think you’ve been so successful where so many other craft breweries have failed? 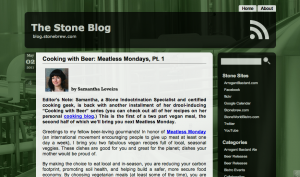 Stone has one of the better blogs among craft brewers. You churn out regular content that’s both relevant and compelling for your audience, including topics ranging from cooking (I thought we were talking about beer?) to new beer releases. Being a team of one, how do you efficiently manage your blog and how do you go about identifying topics and angles you believe will resonate with your customers?

A: Well, we have no shortage of topics that interest our fans. The issue is finding time to write the posts, and I haven’t kept the blog as up to date as I’d like. What I’ve started doing is seeing myself more as an editor than a writer, and assigning posts to other people in the company. The reality is that Stone is growing so fast and there are so many new projects on the table at any given time, that it’s incredibly hard to keep up. For the blog, I just try to zero in on the topics that demand long-form attention.

Finally, how are you measuring success with your social media efforts? In other words, how are you drawing the line from what you’re doing with your blog, Twitter and Facebook to how many cases are going out the back door?

A: There’s really no way to know how “Likes” or whatever else translates into sales, at least that I’m aware of. So we measure success by the growth of our followers and the feedback we receive in comments and retweets and such. We believe and hope it helps sales (I wouldn’t have created regionalized Facebook pages for most of our sales reps if we didn’t), and we keep growing at a break neck pace, so something must be working. One exception is events. Like everything else, our website and social media are our primary, and usually exclusive, promotional outlets. And we sell out almost every event, so that’s a pretty clear translation of social media promotion into actual dollars spent. And when we do events farther afield, in places like Chicago, New York, Baltimore, etc…, and we promote them the same way, bars often tell us it’s their number one sales day ever.

Jacob McKean is the Communications Specialist for Stone Brewing Co. Jacob grew up in Los Angeles and studied History & Anthropology at Columbia University in New York. He has worked as a freelance writer in Pittsburgh, an elementary school teacher in New Orleans, a book vendor in New York City, and a bon vivant in Mexico. He is the honey badger of the social media world.