Should you take conference calls in a coffee shop?

As many of you know by now, I’m an independent consultant.

And, I don’t have an office. I work from my home, by and large. I just have never seen the need for an office. Seems like an additional expense for no real solid reason.

But, I know many independent consultants who have offices. They love them. So, to each his/her own. No judgment here. It’s just not for me. 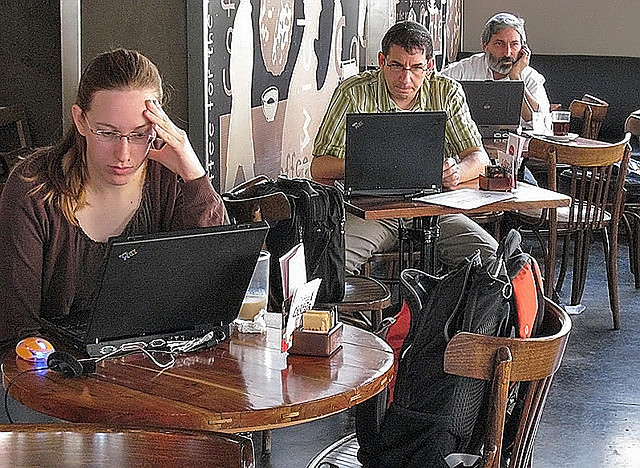 But, that also means I tend to work from a lot of different places.

From restaurants (Bryant Lake Bowl is my fave here in town).

And, from coffee shops.

The coffee shop thing is pretty interesting. You see a lot of solopreneurs working during the day. They set up shop, as if the coffee shop was their office. Not my style, but you do see this.

And, similarly, you see a lot of people taking client calls right in coffee shops.

That’s always been one that bugs me.

Why does it bug me so much? A variety of reasons.

#1–It’s just rude. It’s similar to my rule of not taking phone calls in a restaurant (or really, not even looking at your phone, if you’re with people). It’s just rude. Even if you are by yourself. Step outside and take the call. Even if it is 20 below (in that case, hop in your car).

#2–You never know who’s listening. I posted this same topic on our Solo PR Facebook page last week, and this was one of the over-riding themes I heard back from the crew. One person talked about how she had a friend who over-heard someone saying “no one gives a sh*t about those Twitter idiots.” And, she tweeted it. Would you want someone tweeting your coffeehouse conversation?

#3–If you work for a publicly-traded company, this is a big no-no. Now, I know you’re probably not discussing proprietary information every time you’re on a call in a coffee shop, but you may at some point. And, if that’s overheard, you could face serious consequences if you work for a publicly-traded company. If you’re out of the office, you need to watch your conversations. Just think about it like you’re on an airplane. You wouldn’t discuss company information loudly while sitting next to someone on a plane, right?

So, my approach has always been to avoid taking client calls in open spots like coffee shops. I will avoid scheduling calls during ‘work time’ where I know I’ll be in an open environment.

If I do happen to get a client call in a coffee shop, I’ll hop outside, or better yet, jump in my car. No chance of anyone overhearing me there.

What do you think? Am I over-reacting here? Maybe it really is OK to take con calls in a coffee shop.