Home Blog Uncategorized Should we be de-prioritizing engagements in 2022?

Should we be de-prioritizing engagements in 2022?

That’s an odd headline, isn’t it? After all, engagements are the cornerstone of social media marketing. Why on earth would we want to de-prioritize them in our programs in the year ahead?

Allow me to make the case.

But first, let me remind you of the backdrop. Social media is not the same space as it was when I got started in this business in 2009. Back then, engagements were everything. Twitter chats were popular (all engagements). Facebook posts would have hundreds of comments with active conversations happening in the threads. Engagements were the focus–no question.

But since then, much has changed. Brands focused on using social to sell. Advertising has taken over. And, many people are just plain tired of “engaging” on social, for a variety of reasons.

So, with that backdrop, here are 3 reasons I think you might want to think long-and-hard about de-prioritizing engagements as part of our social media strategy in 2022:

1: People’s behaviors have changed on the primary social media networks

Let’s just take Twitter, as an example. Pew recently had some very interesting research which illuminates this point precisely. For starters, most people on Twitter are not tweeting a lot, and aren’t seeing any likes or retweets on the few tweets they do share. 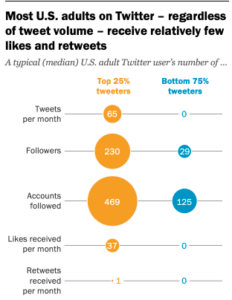 Translation: Most people on Twitter are lurking. Specifically they’re looking for news and information to consume or they’re looking to be entertained–Pew’s research found exactly that in its recent report. 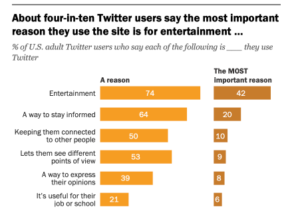 Bottom line: Most people aren’t going to Twitter to engage. They’re going to get information or to be entertained.

In 2021, I’ve done a number of social media audits. And one consistent theme in most of those audits has been that engagements are VERY heavy on likes. In other words, brands aren’t seeing as many comments and shares as they would like. Engagement has become all about likes. And that’t not great considering the like is, by far, the most passive form of engagement. Think about your own behaviors on social–what kinds of things do you give a “like” to? If you’re like most people, lots of things! However, how often do you comment or share a post? Probably not that much. That’s the larger trend–and that’s a big part of why I think we should all take a closer look at our engagement numbers. At the very least, we should probably be separating out engagements by likes, comments and shares, or giving them weight (1 point for a like, 3 for a comment and 5 for a share). This would help us get a better look at what meaningful engagement looks like.

3: In many cases, brands aren’t even engaging back!

I’ve been talking about this for years–the trend of brands posting content on social networks, receiving comments from fans/customers/prospects and then not responding or acknowledging those comments. Believe me, it’s far more common than you might think! If we, as brands, aren’t going to take the time to prioritize engaging back with fans when they take the time to engage with us, what’s the point? To me, it seems like brands are just chasing engagements–they’re not really interested in talking to customers and prospects.

Let’s take a look at McDonald’s on LinkedIn. Huge company, right? Engagement is undoubtedly a priority for them on all social networks. But, here’s a popular post they made recently with almost 40 comments–none of which were acknowledged or responded to from the McD’s team:

Here’s a glimpse at just a few of the comments that have went un-responded to. 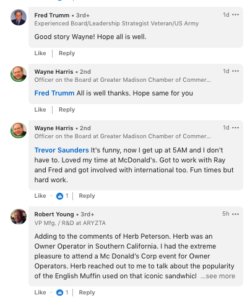 Not only did McD’s not respond–they didn’t even “like” these comments! And most of these were positive comments from fans, employees and former employees.

Again, I could give you many examples of this–McDonald’s is not alone.

So, maybe it does make sense to de-prioritize engagements for 2022 given all this, right? Again, not saying you move away from tracking and measuring engagements altogether, but if you’re seeing the same signals I outlined above in your industry, it may make sense to rethink your objectives and KPIs from a social media marketing perspective.