Rants N Raves: Down with titles and barriers in social media! 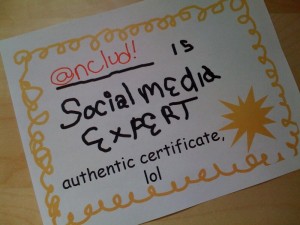 Social media is a great unifying place where students, average people off the street, professionals, and rocket scientists can have an intelligent and innovative conversation about anything – and everything.

But what happens when we bring the traditional power hierarchies from real life into social media? You know what I mean and you’ve probably seen it happen, too. Someone may be brilliant in real life or in their niche, but their blog is blah; and when they arrive on Twitter or FriendFeed, they’re touted as the world’s expert on that niche in social media.

Why is this the case? Maybe we’re uncomfortable with the idea that this new, unchartered territory is fair game.

But we love this new expanse that is a professional and personal playground. Can’t we all get along?

Probably not. Remember Manifest Destiny? I see the same thing happening today where those who are experts in their real life niche or their personal/professional blogs begin to morph into using other social media tools and networks – and attempt to knock everyone else out of the way who has staked a virtual claim of knowledge and expertise. Some may expect to be able to transfer their authority from that niche across mediums.

However, we recognize that it doesn’t work in real life – most people aren’t equally experts in producing in TV, radio, and print. Why would it be so online? I actually don’t think it is. This is where our attempts to transfer real life hierarchies are pretty transparent.

Those who go by “guru” and “social media expert” and “ruler of the online universe” are probably those in real life who haven’t achieved their goal of an executive C-suite title yet. In my opinion, they’re just using these ‘titles’ to build up their cred online in hopes that it will knock out any other contender who has dared stake their claim in the new medium before – or better than – them.

We also have to carry some of the blame, though – how many times have you RTed “social media guru John Doe says the sky is blue”? I’ll admit, I have probably done it, too, although I try to selectively edit and not acknowledge or directly address someone as a guru, even if their tweet or original thought deserves a RT.

The beauty of social media is that we can engage without having a title – real or imagined. There are no barriers to participating in a conversation or even challenging the AP Stylebook. So let’s keep it this way! Don’t be afraid to challenge the status quo. Don’t let a title like “guru” or “expert” prevent you from staking a claim where you have true expertise and knowledge or keep you from  building a discussion. And please don’t put up barriers to prevent others from participating!

What other titles and barriers drive you crazy? Can someone realistically transfer authority across mediums?

Dana Lewis is a writer and strategist who loves social media. Normally, she avoids titles like the plague and dislikes people who try to place her (and others) in a box. You can find her on Twitter or LinkedIn, usually instigating a conversation on #hcsm (healthcare communications & social media). She graduates with bachelors degrees in both public relations and political science from The University of Alabama in May 2010.