Home Blog Trends Prediction: “Unplugging” will be a trend among 40+ crowd in 2015

There’s a Starbucks that’s less than a mile from my house. To say I visit it frequently is probably an understatement. The baristas know me and my drinks by name. It’s sad, really.

I’m usually visiting this Starbucks during the morning rush. During that time, the line can extend out the door (side rant: Only in Minnesota). Point is: there’s usually a long line.

And people in that line are often on their phones (another common situation you see below–had to playfully pick on my PRSA friends just a bit :). In fact, I’d say a full 90 percent of the people are looking down at their phones while in line. 9 out of 10 people! And, I’d also say, given the demographics of our neighborhood (this Bux is RIGHT next to a school) that most of these folks at 40-plus. 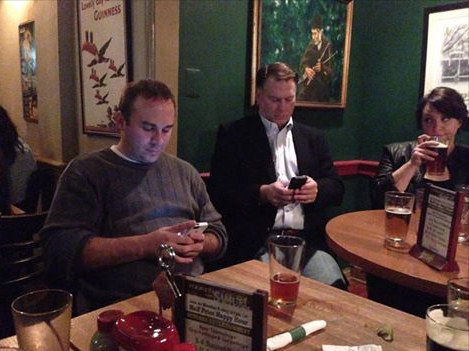 Strangely enough, I’m usually the one in 10 persons who’s NOT on their phone. I do it so much during the day, I’ve learned to find my breaks. Standing in line is a break for me.

I got to chatting with a gentleman the other day about this ongoing habit of people standing in line staring at their phones. His lament was the same as mine: If these people would just look up they might discover an interesting person to talk to in line. I know I certainly did that day.

And my local Starbucks certainly isn’t the only place this is happening. On the bus. On the train. In the grocery store. At the movies. It’s certainly no revelation that people are just completely hard-wired to their phones these days.

But I’m making a bold prediction: Among the 40+ crowd, I think you’re going to see a faction of people resist being tethered to their phones in 2015.

Not all the time, but they are going to make a conscious effort to unplug when standing in line. When they’re on the train. When they’re driving for crying out loud.

Because enough is enough.

You see, I’m singling out that 40-plus crowd because, well, frankly, this is weird for us.

We didn’t grow up with cell phones. Heck, we didn’t even grow up with email (for the most part–I was 22 when I started using email).  So, we don’t have the long and storied history with technology that today’s Millennials do.

So, I believe it will be easier for us to give up technology (just a bit) than our younger cohorts–even if it is for smaller chunks at a time.

Because that’s what it will be. Smaller chunks.

Not checking your phone while in line.

Resisting the urge to post that pic of that beautiful sunset to Instagram (guilty here–as recently as last week!).

And, not checking in on Facebook as often–for no real reason.

I think people in the 40+ group are reaching a tipping point. Just a hunch really–I don’t have any scientific facts to back this prediction up.