Little known fact: The Twin Cities has a tremendously robust interactive/social media market. I know we’re fly-over country and all, but we have one heck of a digital community. Over the last year, the community has grown immensely stronger due to the good work of PR Rock Star Rick Mahn.
As the founder of Social Media Breakfast-Twin Cities, I’m guessing Rick has shook hands, collaborated or chatted with just about every pro who has dabbled in the social media space across the Minneapolis-St. Paul area. So, how does he qualify as a PR Rock Star? Isn’t social media a part of the marketing and communications mix now? Rick’s new role as social media strategist at Land ‘O Lakes gives him instant credibility–and coupled with his SMB work and his general knowledge in the social media arena, he’s more than deserving. Want to hear more? Let’s turn this bad-boy loose…

You started Social Media Breakfast here in the Twin Cities early in 2008. Tell me a little about that experience and how’s it’s changed your outlook and career trajectory?

Let’s see… the idea of SMB, as you may know, was created by Bryan Person out in Boston in Q4 2007 if I remember right. I was watching all these great folks out in Boston wishing we had something similar here in the Twin Cities. He was able to gather so many great folks who I was following on blogs and Twitter at the time, and it really looked like a great idea.
So I email Bryan one day in early January 2008 and asked what he did to pull it together, and if he knew of anyone working on doing something similar in Minneapolis. When he simply said “why don’t you”, it was kind of an awakening of sorts.

Since then, I’ve taken on the approach of an entrepreneur. I apply that perspective to every aspect of my career, and it’s changed how a person approaches things.

You’re currently the chief Social Media Strategist for Land ‘O Lakes right here in Minneapolis. You took a little different path to that position than others—talk about your non-traditional path and how it has helped you do your job effectively.

I suppose in non-traditional, you mean “non-marketing/pr”? Yeah, I’m an old “IT” guy who just got tired of maintaining the technology part of the equation. Though, I do know of a couple of folks in the social media sphere that have similar roots, and I think it’s a valid background for being a social computing advocate.

After doing a lot of tech consulting in the ‘90s, I wound up working at Michael Foods in Minnetonka, MN for a decade. It was a great experience with great people – I learned tons of things about many aspects of the business because of the technology analyst work I did there. This was indispensible experience that I’m grateful to have.

Sufice it to say, after having an epiphany at a tech conference in Orlando in April 2007, I walked away from one of the best jobs I’d had in my career to that date. The future beckoned, and I wanted to find out what that was.

Coming out of IT with the diverse technical, management, and analytical skills that I have has really been the edge for me. It’s allowed me to watch past and current trends, and forecast what direction things are going.

The other part was blogging. I started blogging in 2004 on MSN Spaces and learn more about what transparency and authenticity were all about in the blogosphere. These also changed the way I viewed each new opportunity as I left corporate life in 2007. 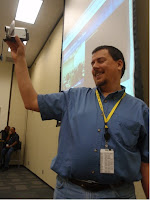 Before you can get to the community manager part, a company has to figure out it’s strategy. That’s where I’ve been at for some time. The strategy part – it’s because of the IT geeky part of me that I tend to take a look at the bigger picture. So what I’m doing at Land O’Lakes is social media strategy.

There sure are more companies looking to fill both these types of needs, and they need help, just in figuring out what they need to figure out. That’s something that folks need to think about as they look to take on one of these positions.

1 – Communication skills. These skills are very necessary for any candidate in a social position. Knowing how to interact with public and management (and the workforce) is very important to success. You need to listen, moderate, interpret and communicate back. Not easy in some cases.

2 – Writing. As a community manager, writing is a key component. While it’s something I struggle with every day (I’m a techy geek remember), its not hard to do and gets easier with practice.

3 – Business, management, or marketing experience. It could be one of these, or a combination of the three. You need to understand the business you speak for. You need to be able to manage time and resources – kind of like a lot of mini-projects. Finally, everything you do is a version of marketing, whether internal or external. It goes back to communications skills.

You’re also an active blogger at www.rickmahn.com. How do you drum up new ideas for your blog and keep content fresh? 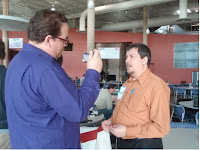 Blogging is a tough gig. Topics come and go, and I mean that sometimes I can sit down and come up with 100 ideas, and others I can’t seem to think of one. Writing is the other hard part – you always think “well everyone knows that!” The reality is that everyone doesn’t know that, and while you can come up with some great content, it’s the readers that really add value.

To come up with new ideas, I keep up with what’s going on online as much as possible. Talking with friends and associates working in social media, or in business, or in a different industry helps me keep a broad perspective. Sometimes I’ll just jump into the current meme going through the blogosphere because I have an opinion to add.

You’re as plugged in to the
national social media scene as anyone in the Twin Cities. Who are your five “must follows” on Twitter and three blogs you just have to read each week?

Hmm, for Twitter it would have to be: Scott Monty at Ford, Becky McCray (an associate from a business advisors group), Chris Brogan, Liz Strauss (founder of SOBCon), and Keith Burtis of Best Buy.

For blogs it’s gotta be: Jeremiah Owyang, Jason Falls, and (again) Chris Brogan. These folks are the best minds in social media today, and I’m glad to have met most of them. The other thing is that they are just real people – no different than anyone else trying to advance in this space. They just got here a little earlier than the rest of us.