Home Blog Case Studies #PlayMoreMN case study: Why the “tell us your story” approach is NOT dead

#PlayMoreMN case study: Why the “tell us your story” approach is NOT dead

If you live here in the great state of Minnesota, last week you probably noticed an explosion of tweets, Facebook posts and Instagram pics in your feeds last Wednesday.

That’s because the Children’s Museum of Minnesota unveiled a new one-day campaign (as part of a larger brand revamp) named #PlayMoreMN.

The premise? In our go-go world of email overload, social media addiction and multiple devices, the Children’s Museum is taking a stand (and it’s a good, on-brand stand for them to take): We need our kids to play more.

They asked Minnesotans to do three simple things: 1) Make time to play today. 2) Take a pic or video. 3) Post it to social media with the #PlayMoreMN hash tag.

We’ve seen this movie before, right? And, typically, it doesn’t turn out too well for brands.

It’s hard to get your customers to “share their story” on social media.

It’s just not nearly as easy as most people would have you believe.

But, sometimes a brand captures lightning in a bottle and executes the right way.

The Children’s Museum of Minnesota is a perfect example.

Here’s why it worked: 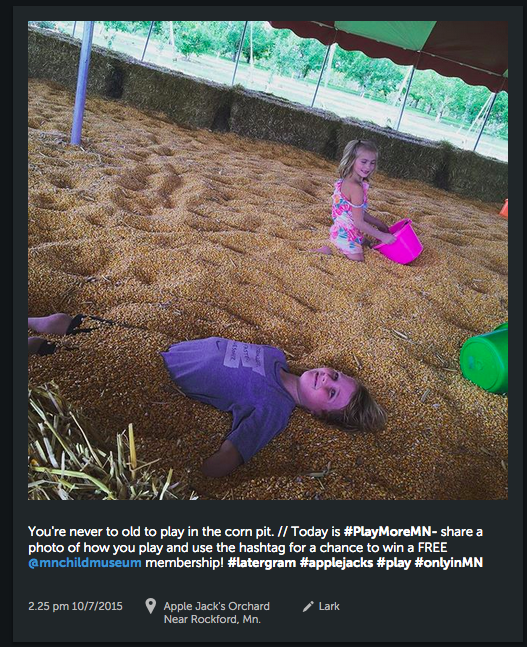 The Children’s Museum actively engaged a slew of mom “influencers” across Minnesota. People like Samara Postuma (kids pictured above), Melissa Berggren, and Jen Jamar. These are Moms I’m guessing have visited the Museum many times with their kids. They’ve probably talked about it online before. I’m sure the Children’s Museum has noticed that. Maybe they did some outreach before the event (which would have been smart). Maybe they didn’t. Regardless, this loyal audience showed up for them on Wednesday. And they were key to the success of the campaign.

They engaged their corporate partners and donors

The Children’s Museum’s corporate partners showed up big time on Wednesday. Companies like Cub Foods and Best Buy were posting across different social platforms with their support. 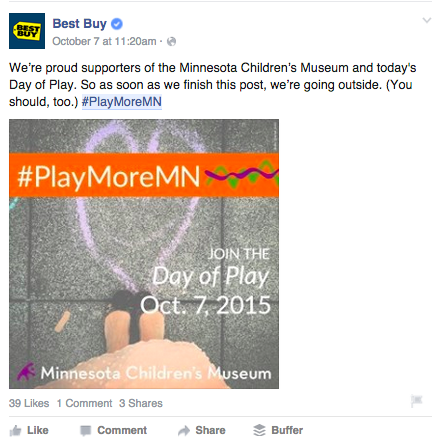 Other non-profit organizations were also posting in support of #PlayMoreMN. Orgs like the United Way and Family Fun Twin Cities. 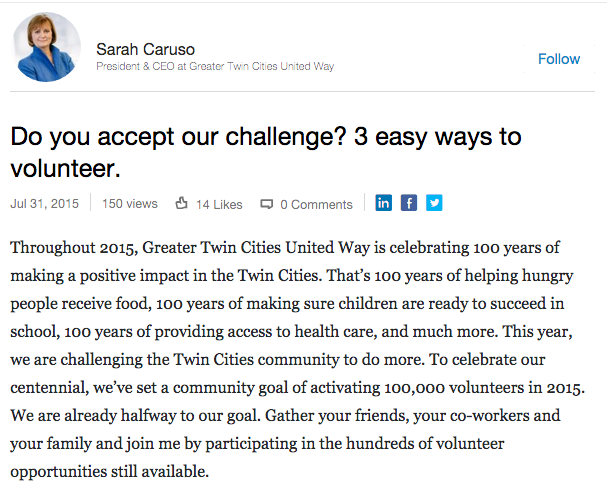 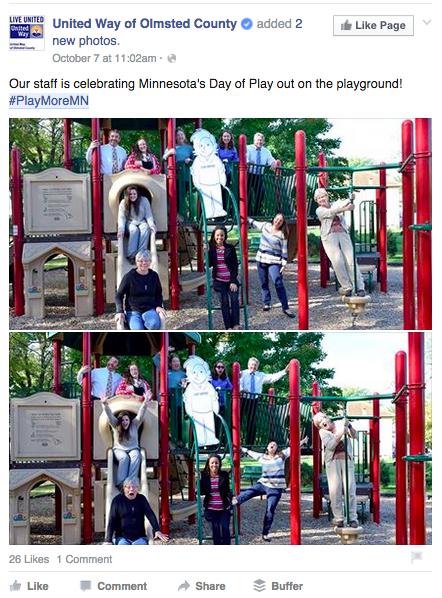 Even media partners were showing their support. 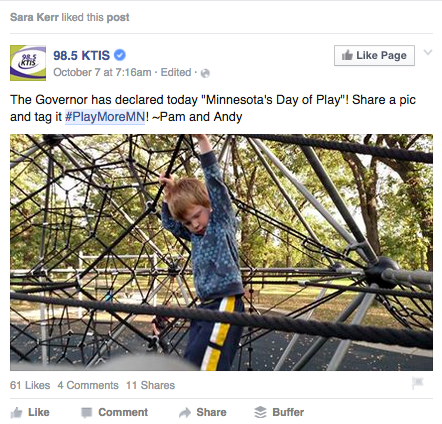 Another smart move by Children’s. Take advantage of ALL your audiences. In this case, corporate, non-profit and media partners provided a HUGE lift for #PlayMoreMN throughout the day, as many of these accounts has tens of thousands of followers.

Most likely, The Children’s Museum had a few key goals with this campaign. They wanted to drive awareness for their organization–no doubt there. Awareness for the “cause” (playing more with your kids). Traffic to their web site. And, most likely, some form of engagement metric (RTs, mentions, favorites, etc.). With so many people posting pics and sharing videos of their kids and families, acknowledging, responding and engaging would only make sense, right? And, you saw Children’s show up consistently–throughout the day. 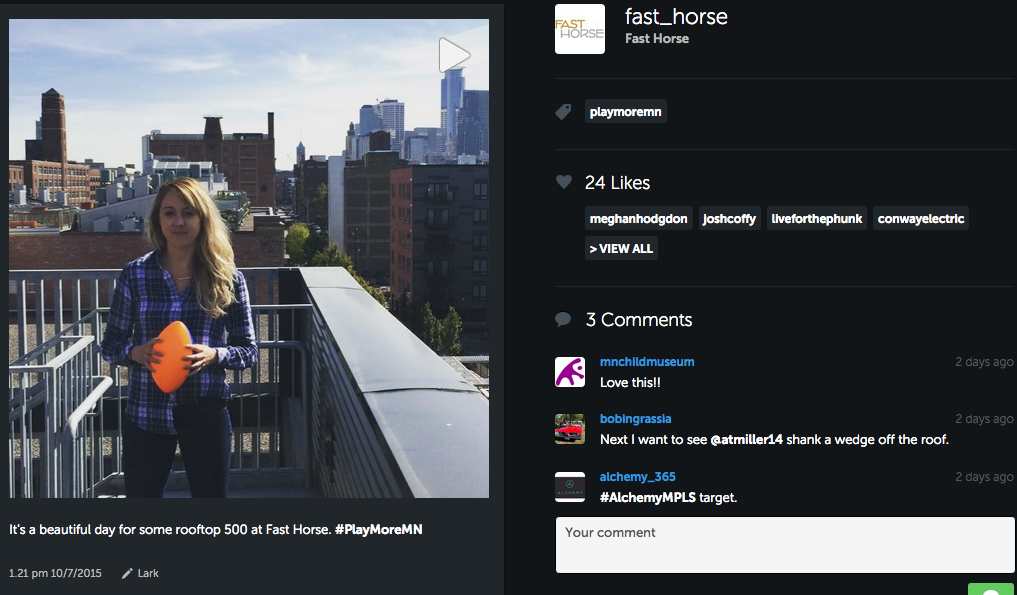 It was a lot of traffic, so most likely Children’s may have had a hard time keeping up. While they showed up fairly consistently throughout the day, there were bunches of tweets, Instagram pics and Facebook posts that did not receive responses. And, that’s probably OK. But, it did represent a missed opportunity to engage the community that much more. Most likely just a resource issue–remember, we are talking about a non-profit organization.

Many opportunities for fans to engage and learn

My favorite part of this campaign is that it really wasn’t just a social campaign–it was a DIGITAL campaign.

Just look at the site where Children’s was driving traffic–what do you see?

Right at the top, you see a short video designed to set the stage for the entire campaign.

Scroll down and you see the easy-to-follow rules and ways to engage with #PlayMoreMN. But, Children’s didn’t stop there. They added even more ways to engage with the campaign–see the #PlayMoreMN tattoos. And, a more “official” way to engage by taking the pledge (read: We will send you information after you take this pledge! :).

And, lastly, Children’s took the opportunity to educate parents about why “play” is important for their kids. A slew of posts around the topic show up at the bottom of the site. Smart. Curating their best “play” content around this specific topic on this specific day.

All in all, a lot to like about what The Children’s Museum of Minnesota did with the #PlayMoreMN campaign. A big kudos to Bob Ingrasssia and Sara Kerr! And, for showing us all that the “tell us your story” approach to social media marketing isn’t quite dead just yet.