Home Blog Other Page One: Inside the New York Times: A Rare Movie Review

Page One: Inside the New York Times: A Rare Movie Review

A few weeks ago I finally got around to watching a documentary I really wanted to see in the theaters initially: Page One–Inside the New York Times. As the title states, the doc’s all about the Times and the recent struggles and challenges it has faced as new media has exploded on the scene. 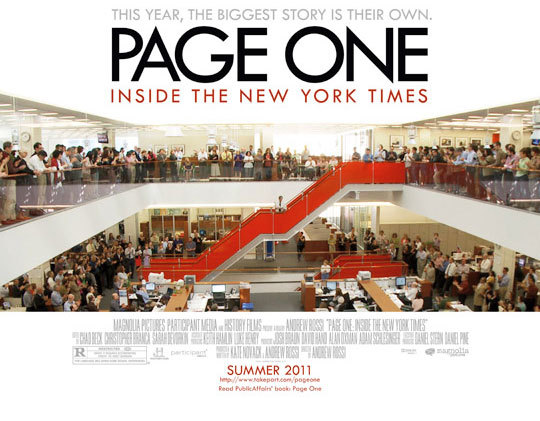 Since media movies–especially documentaries–are fairly rare, I was really looking forward to this one. And, I had heard David Carr played a prominent role in the film, which intrigued me even more since he’s “one of us” (a Minnesotan). The film also got a 79% on Rotten Tomatoes–not the 90+ I usually shoot for, but pretty darn solid.

The movie did not disappoint.

As with all docs, it’s not a knock-your-socks off entertainment experience. But, the movie had depth. It was interesting. And, it raised a number of questions for the viewer that you left the movie/theater still wondering about.

Here were the common themes I kept thinking about as the movie concluded:

In virtually every scene where you saw Stelter working at his desk, you saw he had a minimum of two computers open at all times. You also saw him working in WordPress often (Stelter reports on TV and digital media for the Times). And, you saw him monitoring Twitter often. That’s the journalist of the future (and the present, in many cases). He’s got his ear to the digital ground. He knows basic blogging/HTML skills. And that’s layered over basic journalistic skills and ethics. Locally, I think about people like Julio Ojeda-Zapata, Gregg Litman and Justin Piehowski.

Could the NY Times actually die?

It’s actually a ridiculous question in my mind. I mean after all, the Times is a business like any other business, isn’t it? Every business can die. But, in the film, you get the sense the Times puts itself in a different bucket. In fact, the movie references the Atlantic article written by Michael Hirschorn that tackles this exact topic. The Times response was a little surprising to me. It wasn’t “Every business can die–but we’re taking steps to ensure the health of the Times for years to come.” It was more like “This is a load of crap and HIrschorn is off his rocker. The Times will live forever.” Could the Times die? Of course it could. Would it be a travesty? No question. But let’s not fool ourselves people. The Times is a business. Newspapers are an important part of our lives–and our democracy. But, they’re not above the laws of capitalism.

In general, bloggers have a pretty bad rap. We’re untrustworthy. We’re biased (as we should be). And we’re unethical, in some cases. But, this behavior isn’t limited to the online arena. Journalists break ethical guidelines, too. Not nearly as often, but it happens. Remember Jayson Blair? If you don’t remember, he was the Times reporter who resigned in the wake of the scandal around his plagiarizing stories. Doesn’t get any more unethical than that in journalism now, does it?

Are ANY younger people going into journalism?

One thing I noticed throughout the film: I didn’t see a lot of younger people in the newsroom (save Stelter). I mean, I know times are tough for the journalism profession, but if younger people aren’t pursuing degrees in journalism and joining institutions like the New York Times, what kind of future does it have? Where’s the new thinking going to come from? Where are the people who are going to transform the industry? If they’re not considering journalism as a career option, what does that mean for the industry 20 years from now?

Could sites like Gawker survive without the New York Times?

In the movie, the issue is raised: Could successful sites like Gawker survive without the Times? It’s an interesting discussion. The Times, after all, feeds thousands of blogs and sites a day with its well-researched content. It also provides hardcore news content for writers at these sites/blogs to comment on. Take that away and these other sites die, right? I don’t think so. I tend to think this is where the Times gets a little “high and mighty” (a theme you see come through in the movie a few times, actually–see above). If Times content goes away, wouldn’t writers for sites like the Gawker just find other content to use and comment on? Yeah, they would. Now, it probably wouldn’t be the same quality of content that the TImes would offer, but I would argue most people don’t care/know the difference. Harsh reality, but I really think that’s true (unfortunately).

And, a final side note: I loved David Carr in the movie. I know he wasn’t playing a character obviously, but there was a lot of humanity to his “character.” Here’s a guy who’s a recovering addict who’s now writing for the top newspaper in the country (probably the world). He’s passionate. Loyal (to a fault). And facing all the same realities every journalist is facing (the threat of not having a job). And, I loved the scenes where he was defending the Times in interviews and speaking opportunities (SXSW a couple years ago). I also loved two specific quotes Carr had in the movie: “I can’t get over the feeling that Brian Stelter was a robot built int he basement and sent to destroy me” and Benefit of Twitter for journalists: “Listening to a wired collective voice.”

And, after posting that I had watched the movie to Facebook last month, I had this exchange with a friend of mine in Iowa. Gives you a glimpse into how far Carr’s come in the last 10-15 years. 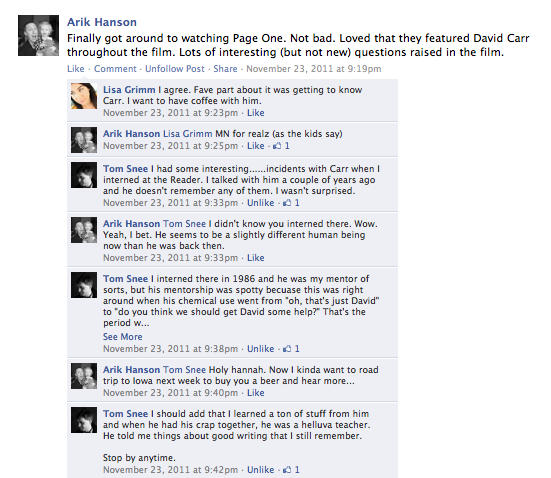