If you follow me at all online, you know I’m a HUGE craft beer geek. Not to the level of some, certainly, but let’s just say I frown on Miller Lite 😉 And, here in Minneapolis, we have no shortage of outstanding craft breweries.

So, today I thought we’d take a look at some of those breweries and see how they’re using social media to their advantage–or disadvantage. Who’s doing things right? And, who could use a little help? Here’s a look at just a few of the crafts brewers in town and what they’re doing with social. 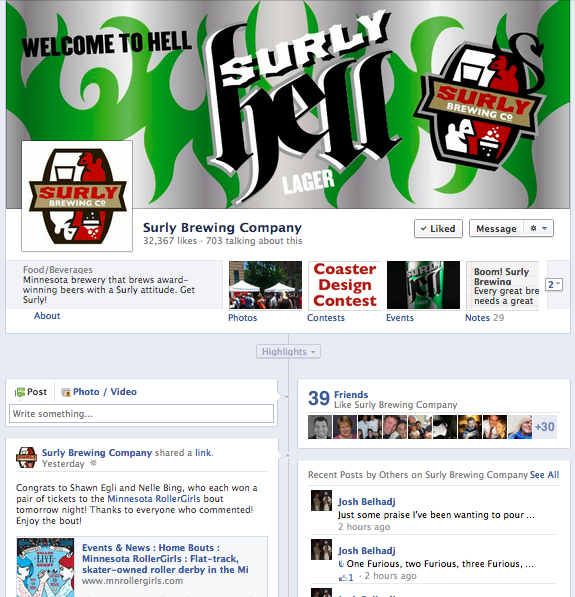 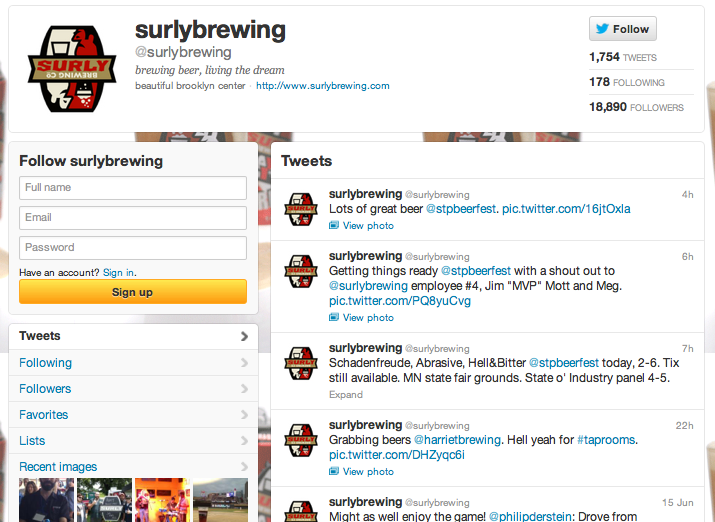 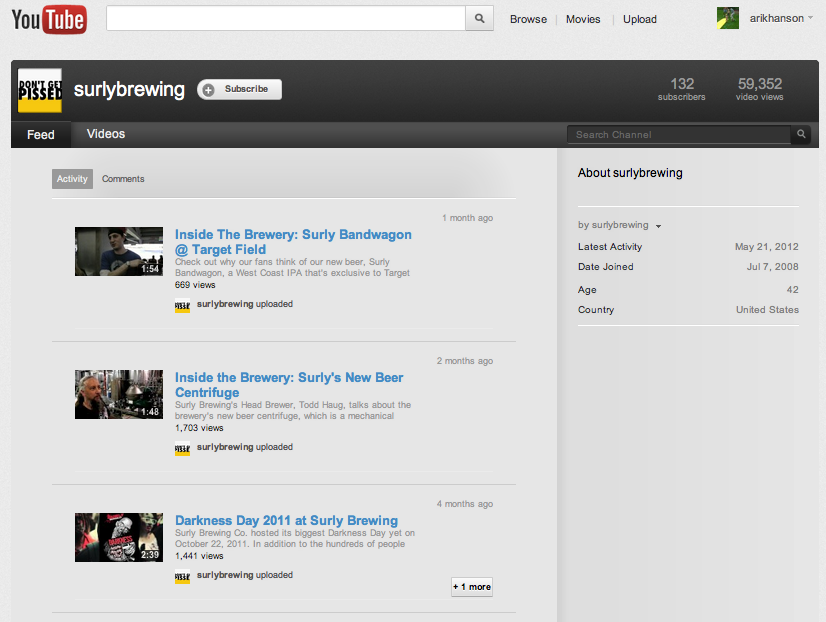 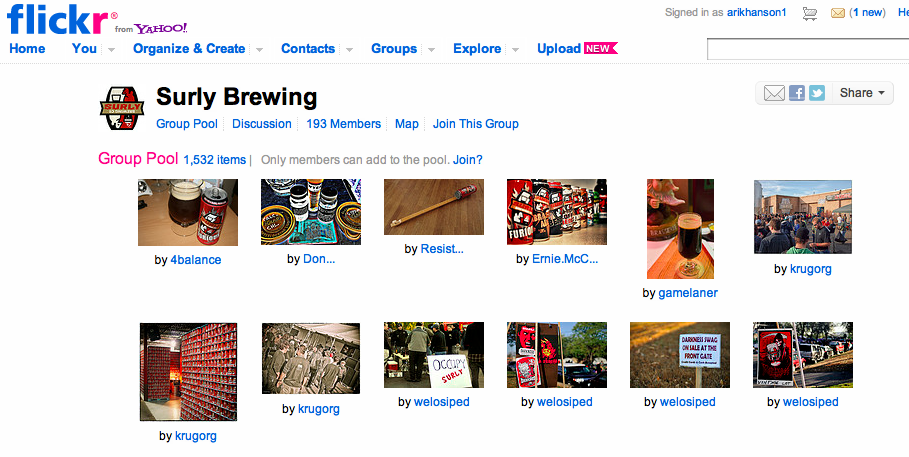 Great engagement on Facebook, despite the fact that they’re not taking advantage of visual assets on Facebook. Why not include more shots of the beer and their fantastic can designs? Why not include shots from the Surly events across the Twin Cities? Why not stage shots like Starbucks does so well? LOTS of opportunity here.

You also see very few status updates from Surly that spur discussions. I mean, if you’re using Facebook as a marketing tool, you’re doing it for one of two reasons–to raise awareness or drive leads. I’m guessing they’re more intersted in the former. In that case, the only way you’ll make it in more newsfeeds is with a crapload of likes/comments, which is possible with their page because of the relatively large fan count and the legion of passionate fans they have–it’s right there waiting for them! If I were Surly,I’d be asking questions in EVERY post. I’d be using popular structures like “Hell or Cynic: Which is your fave Surly summer brew?” I mean, those would ROCK Facebook. And, they’d definitely show up in more newsfeeds.

Finally, I love some of what Surly does with Twitter. They’re engaging. They answer questions. They’re a part of the beer community. But again, there’s so much more opportunity with a brand like Surly that has these fans just waiting to help. Why not personalize the account a bit more? I mean, everyone knows Oman Ansari, the founder of Surly. He’s an interesting guy. From what I hear, he’s a likable guy. I’m guessing he might be tweeting now anyway. Why not make it his account, for the most part? Warm up the brand a bit? Second, why only following 178 people Surly? Can you really be listening that much if you’re only following 178 people. I mean, shouldn’t you be following some of your fans? Wouldn’t this help drive engagement and volume on Twitter? 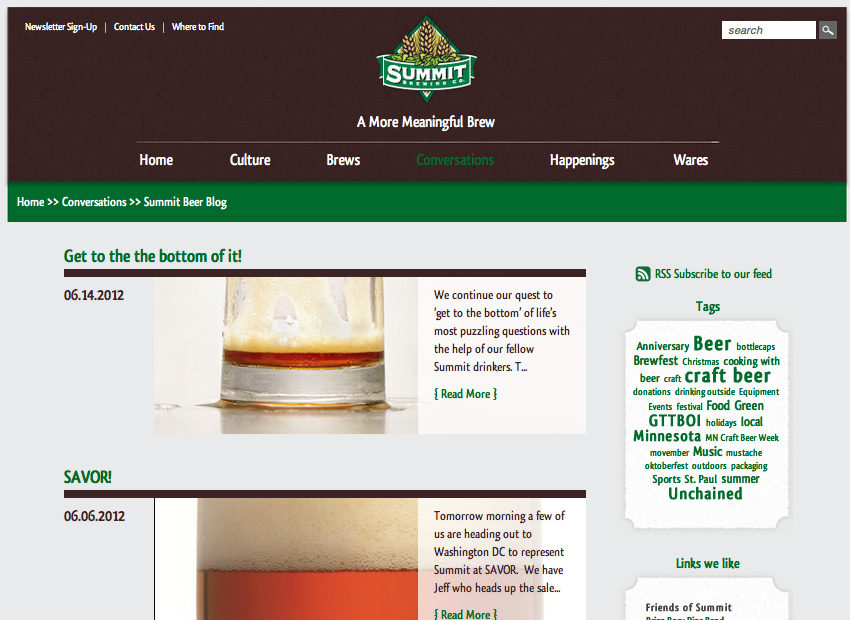 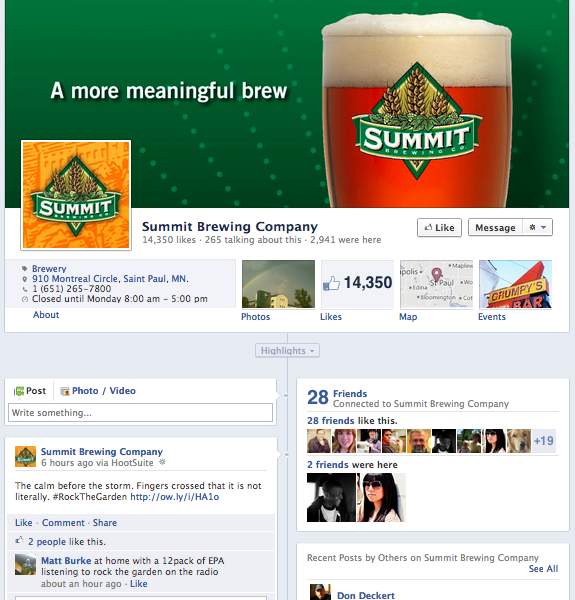 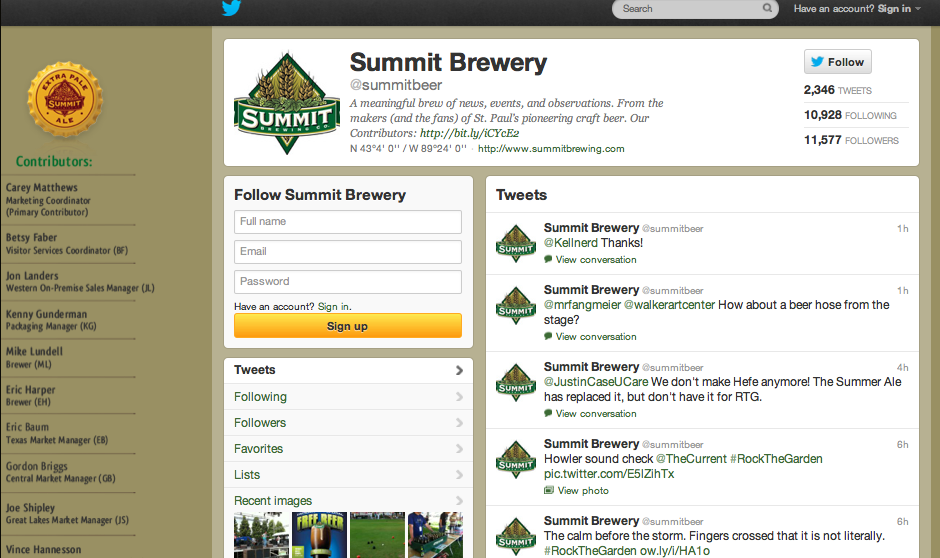 Much like Surly, Summit is missing a HUGE opportunity to take advantage of more visuals on Facebook. And, with the image stockpile they must have due to their big advertising budget, I’m a little perplexed as to why they’re at least not using that. Plus, I don’t see a lot of posts aimed at engagement. Might not be their goal, but with 20,000-plus fans, it just seems like they’re missing a big opportunity there, too. But, maybe the most disappointing thing about Summit’s Facebook work is the fact that they’re clearly posting the same content to both Facebook and Twitter (easy signal: the hash tags that show up regularly). If I were Summit, I’d use Facebook purely as an engagement play. Post photos of their fantastic beer along with compelling headlines designed to engage fans (Summit Pilsner or Pale Ale: Which way do you lean?). With posts like that, they’d see huge like/comment numbers and most likely show up in more newsfeeds. Plus, they could use those posts as Sponsored Stories and really boost engagement (and convert new fans).

On Twitter, Summit seems to be a lot stronger. A steady stream of daily tweets from the brewery featuring their newest beers (Saga recently), where it’s on tap and events (big promotion of its #backyardbash this last weekend). I also love that they’re spreading the wealth–asking more than 10 different employees to tweet on behalf of the brand. Smart. But, the primary voice that comes through is pretty true to the brand. And engaging. High marks for Summit on Twitter.

Finally, I get a bit of what Summit’s doing with its blog. Show a little brand personality. Highlight the events they sponsor/host. Show they’re a good community partner. All good stuff. But, what I don’t see is the blog driving beer sales. But, that might not be their goal–and that would be fair. I will say, however, that the posts that really drew me in (and I’d say I’m in their target audience as a huge craft beer guy) were the personal posts that really were unique and told a story about Summit–see the brewer who grew hops in his backyard. If I were Summit, I’d work to uncover more of those bad boys. 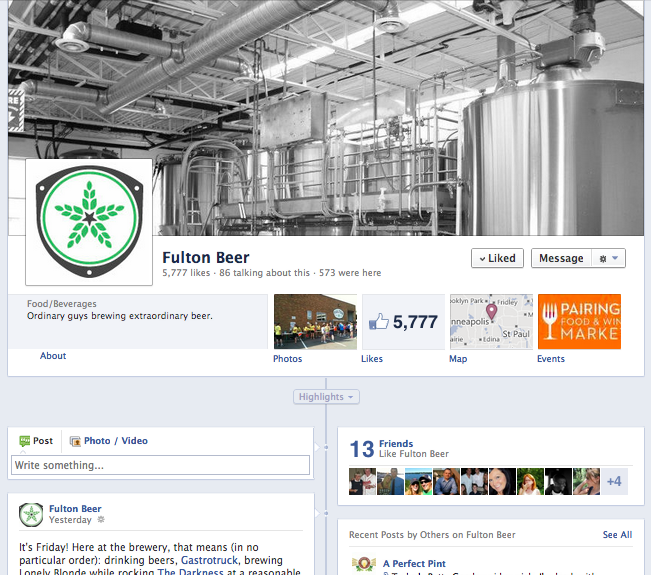 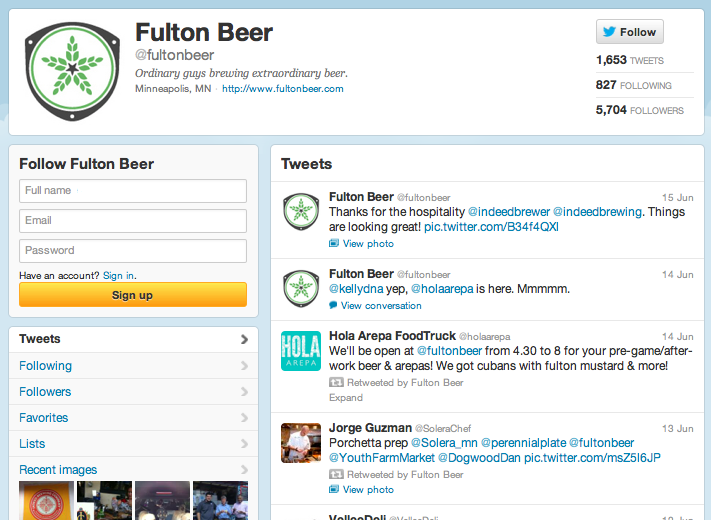 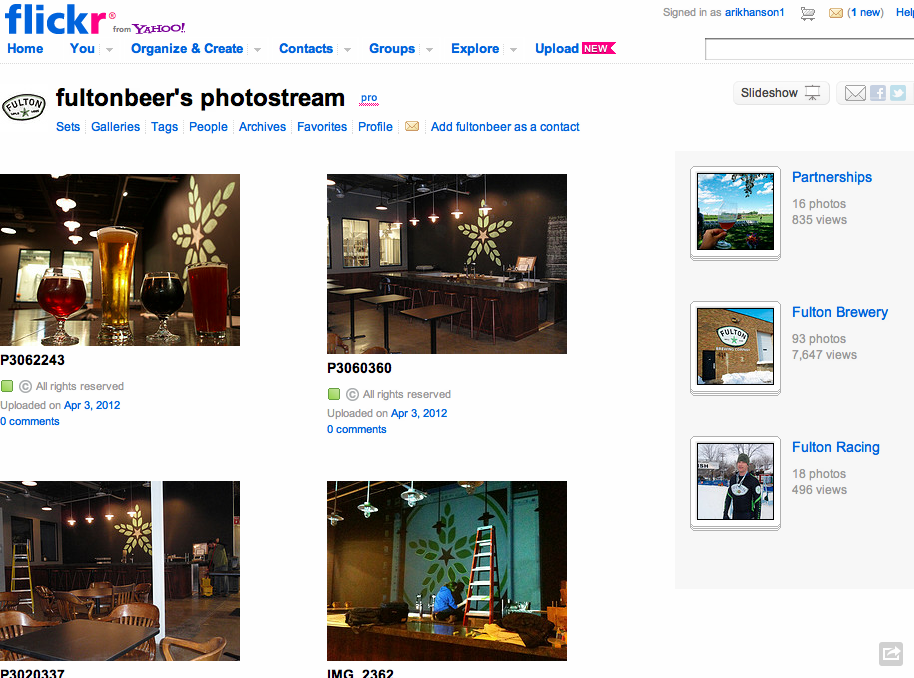 Much like Surly and Summit (noticing a trend here), Fulton is missing the boat with visuals. The few times they have included pics, they’ve generated more than 100 likes (new tanks in July, opening of a new cask in July, etc.). But again, why not feature photos of YOUR PRODUCT! Fulton is a very hot beer here in the Twin Cities–and the taproom has some momentum. Why not build on that with pics of your new beers and the taproom? Right now, Fulton merely seems to be using Facebook as a means to update fans on Taproom availability and new beers–which is fine, but isn’t going to drive awareness deeper (through more likes and comments) or engagement.

What’s funny about Fulton’s Twitter usage is that they’re using more photos on Twitter (why?) than on Facebook, where they’d be far more valuable. Fulton’s doing all the right things via Twitter though–responding and engaging with fans; sharing new beer updates; sharing pics/tweets from events. But, personally, I’d suggest letting more personality show through. This is a company built by guys from the Fulton neighborhood. It’s a good story. Why not let that come through on the account? Right now, it’s very “corporate.” No personality. No branding (other than the avatar). I’d lighten it up a bit.

What’s really perplexing is why Fulton has a FlickR page. They have great photos uploaded there, but they’re not tagged or titled (at all, as far as I can tell) and they’d be MUCH better utilized over on Facebook.

Overall, Fulton shows up much like Surly and Summit–just with smaller fan counts (and missing out on similar opportunities). 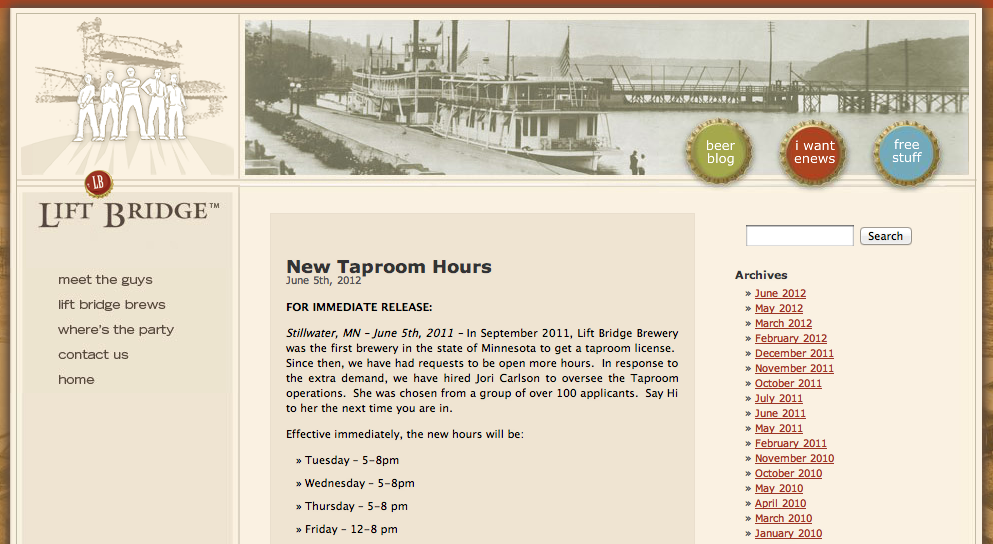 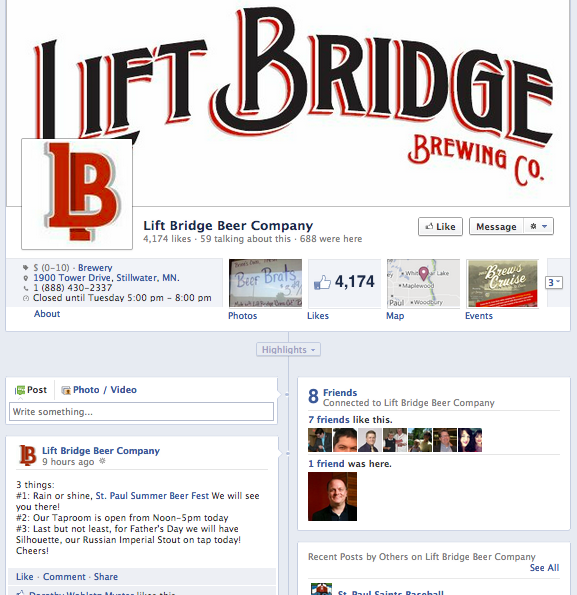 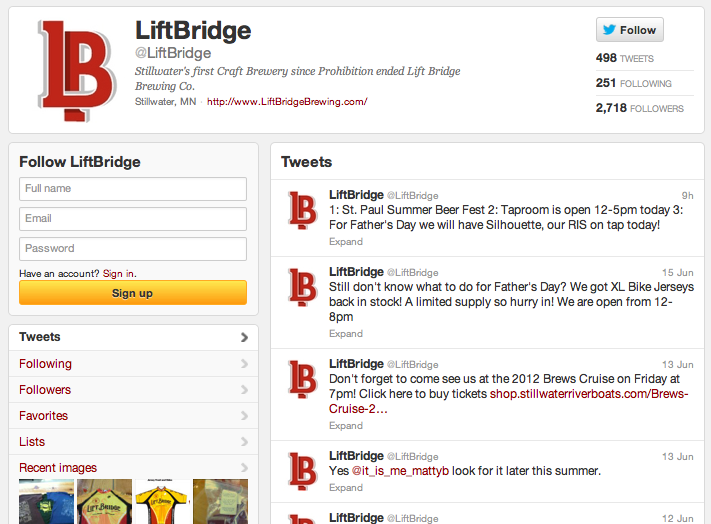 I’m beginning to sound like a broken record here, but Lift Bridget also seems to have missed the memo that photos work REALLY well on Facebook. Like the other breweries, Lift Bridge uses Facebook as a vehicle to get news and information out to fans about events and new beer releases. They also seem to be struggling with how to insert links, as evidenced by the last few posts last week.

Lift Bridge uses Twitter much like the other breweries–to share news and information. And they regularly engage with followers and answer questions. Check. But like Fulton, the account is lacking personality. We know a person is behind the page–why not name him/her? I really just don’t understand the strategy of not naming the person for these beer brands–especially when some of these brewers are fairly prominent folks in the local and regional brewing community.

Finally, Lift Bridge does have a blog, although they don’t post all that often. And, it frequently centers on events and new beers. My question: Why not use the blog as a tool to drive e-newsletter subscriptions (the Holy Grail in terms of marketing leads)? They have the tools in place–really wouldn’t be that tough.

In all, Lift Bridge is missing a whole slew of opportunities to extend its brand, drive awareness and build a lead database through it’s e-newsletter tool. But, given the communities they have online, it wouldn’t take much to get things moving in the right direction. 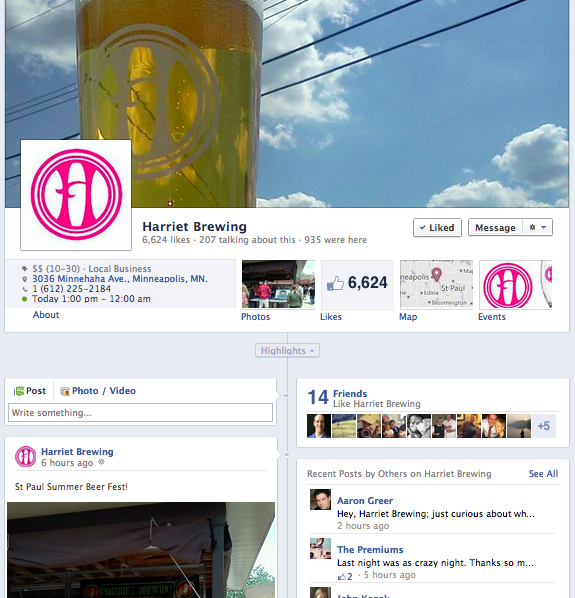 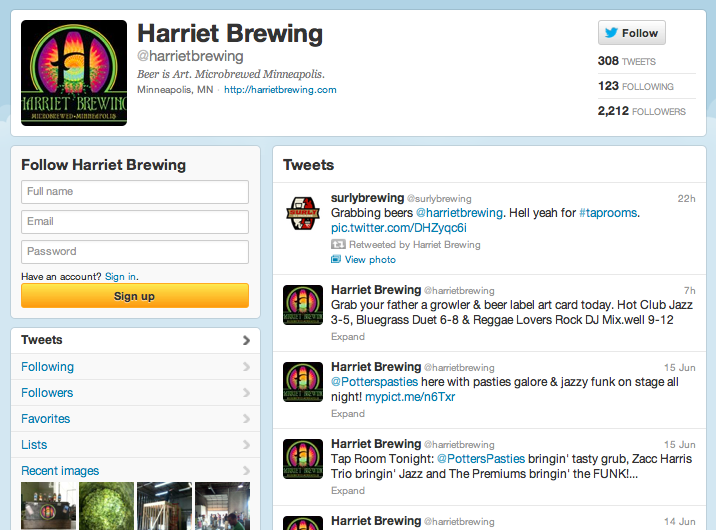 Of all the breweries profiled here, Harriet seems to be the closest to understanding how to use Facebook. They’re using more photos than the other breweries (which isn’t saying much), but they’re still missing the boat in terms of the total content package. In essence, I’m really surprised how none of these breweries has caught on to the fact that Facebook is where your BIGGEST fans live. You don’t have to convert these folks. They’re already there. So, news and information are great–but simple “pride” statements would go a long ways.

On Twitter, Harriet seems to be going through the same motions as everyone else. Sharing news and information about events and new beer releases. Retweeting lots of partners and bars featuring their taps. But, I again don’t see any brand personality here. Nothing to distinguish Harriet from the other craft breweries in town (even though I know it’s there–I really like Harriet beer).

As with Lift Bridge, the bigger opportunity Harriet’s missing out on is using its social tools to drive sign-ups for its e-newsletter. Sure, they could share a URL to the form on Facebook/Twitter every so often. But, there are also more creative ways to convert people to sign up–and that’s what’s lacking here. 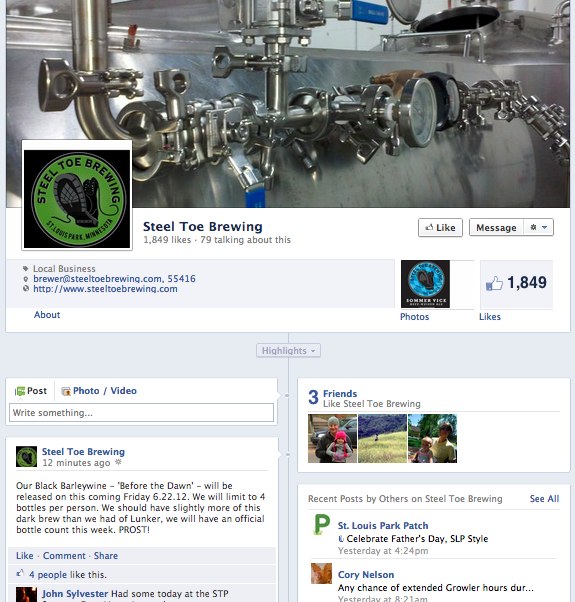 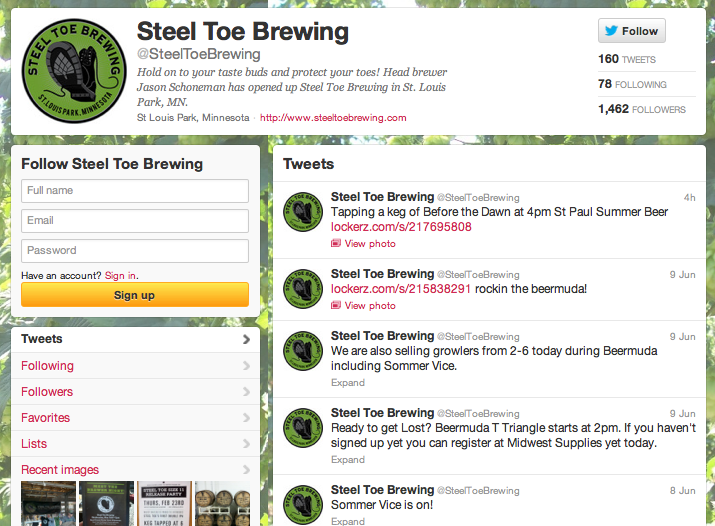 Just the basics from Steel Toe on Facebook–same old, same old. It’s funny how they all seem to be mimicking each other in content and strategy. Wouldn’t it make sense to zig when everyone else is zagging? That’s the opportunity they all have, but no one seems to be taking right now.

Not a lot of action on Twitter. The brewery has only tweeted five times since July 13, which leads me to question whether it’s even worth the time and effort. But that seems to be a recurring theme, too. Are these breweries using social tools just because their competitors are? Sure seems that way in a few cases… 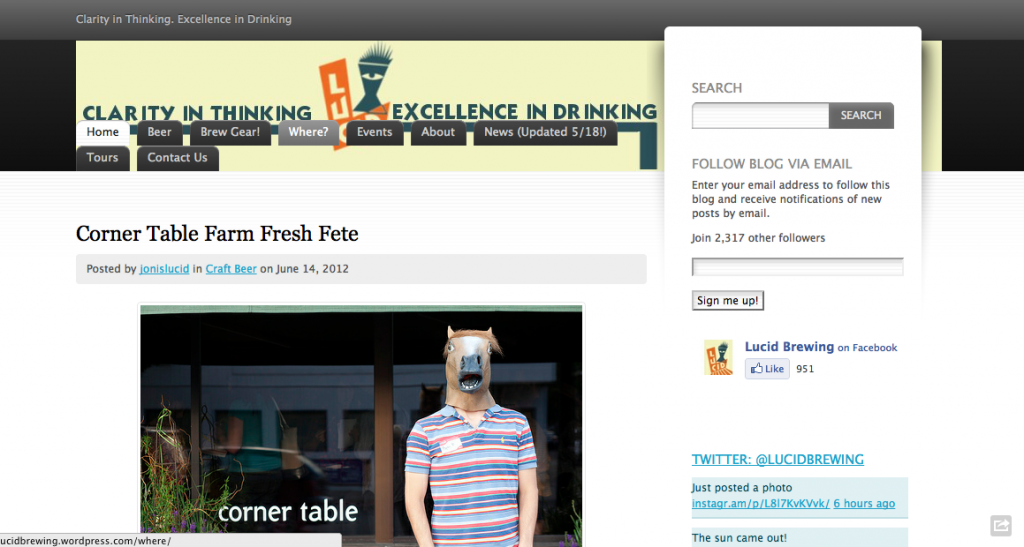 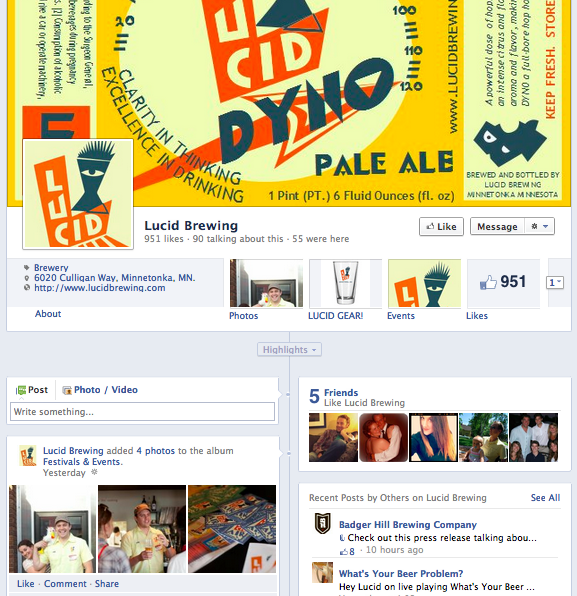 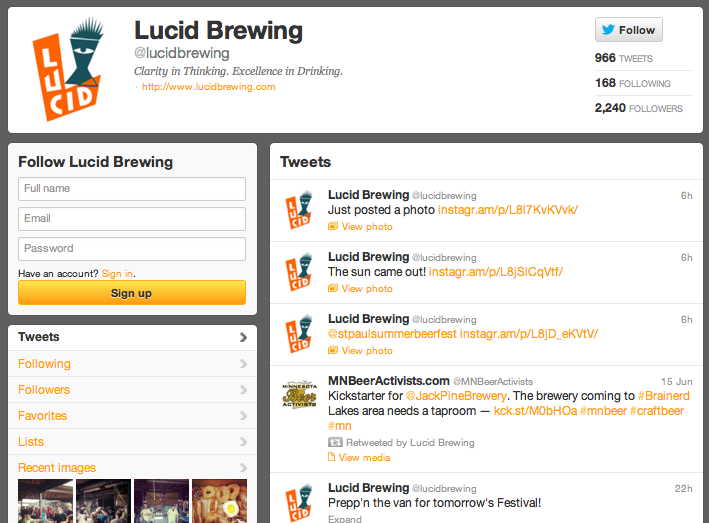 FINALLY, a local brewery who gets it. At least, that’s how it appears from the outside. Lucid is using photos primarily as a way to communicate, share and drive engagement. They’re also taking advantage of the new Timeline tools to highlight and pin posts. They also have an app on Facebook designed to give folks the chance to sign up for their e-newsletter–not a huge deal (I’m guessing they don’t get a ton of signups organically), but it proves their a bit more savvy than the other breweries. I’d only like to see a little less focus on them (new coasters, new shipments, etc.) and more focus on what makes Lucid truly unique. As more craft breweries enter the space, that’s the critical marketing challenge–digital or otherwise. How do you distinguish yourself from the other breweries?