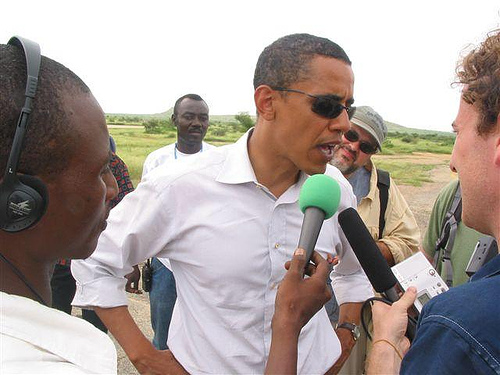 Today’s guest post comes from friend and Michigan-based colleague, Ari Adler. I’ve gotten to know Ari a bit over the last few years through our affiliation with Ragan and through Twitter. Ari is currently the Press Secretary at Office of Michigan House Speaker Jase Bolger and the president-elect for Central Michigan PRSA. Today, Ari opines on the topic of media training.

All the media training in the world won’t help if you leave common sense behind while being interviewed. That’s a key message for public relations professionals and consultants to remind clients when you are training them on media relations.

We often spend so much time worrying about how a client will look, how they will sound, whether they can stay on their key messages or how to address tough questions.

What we don’t spend enough time on, I fear, is basic common sense. We need to get clients thinking how technology has changed every reporter into a broadcaster, even if they are officially a print reporter, and how every report now has a worldwide audience thanks to the Internet.

I’ve seen two instances of this failure to remember the basics lately that prompted this post. One of them involved President Barack Obama, so it’s not just about people who have never dealt with the media before not thinking clearly. During a rather prickly interview with a Texas TV reporter, the president was visibly annoyed. It’s bad enough for the President to show the annoyance in his face, tone and body language. But he made an even bigger gaffe when he chastised the reporter after the interview, but while he was still being recorded. The problem occurs at the end of this report.  As the President reaches up and removes the microphone from his lapel, he leans toward the reporter and says, “Let me finish my answers the next time you interview me.” It’s included in the news report, because it helped the TV station frame the interview the way they wanted – as their reporter having the guts to challenge the President on issues important to their viewers.

For the President, it shows that he’s still an amateur when it involves common-sense thinking around the media. First, at the moment the interview appears to be over, he reaches up to remove the microphone, as if he can’t get that thing off fast enough. Second, he continues talking and saying things that might matter even though the mic and camera are still on.

No matter how tense the interview gets, always remember the old adage, “Never let ‘em see you sweat.”

Sometimes, interviews can be friendly and still get you into trouble. In fact, those are probably the ones that are more dangerous. Those are the ones where your client might be too relaxed and become chatty, not thinking about their key messages and the best way to deliver them.

I saw a case of this happen recently with a state legislator when chatting with a print reporter who was recording the entire exchange. The printed news reports that came out were fine, but the legislator wasn’t crazy about the way the broadcast sounded. But, wait, didn’t I just tell you this legislator was talking to a print reporter? That’s true, but the reporter also produces a weekly podcast, posting their interviews online.

The trouble with the interview wasn’t so much the content, but the way it was delivered. The legislator might have thought a little more carefully about how they were saying things, perhaps sounding a little more serious and a little less conversational. But, as the legislator later admitted, they never considered that the recording might show up anywhere for anyone to hear because they were talking to a print reporter whom they assumed was just using the recorder for note taking.  But print reporters have become broadcasters and everyday citizens have become news gatherers and disseminators. The technology exists to catch you off-guard, even when you think you’re on your game.

So the next time you’re training a client, don’t forget to include the most basic concepts when you cover “the basics.” And never forget these yourself. I’ve always been a fan of the saying, “Common sense isn’t.” When it comes to media relations, it appears that saying is true, whether you’re a state legislator, the President of the United States, or my next client.

Ari B. Adler  is the Press Secretary for the Michigan Speaker of the House. Prior to joining the Speaker’s Office, he helped oversee media relations and social media for Delta Dental of Michigan, Ohio and Indiana as well as the Delta Dental Foundation. He is an adjunct instructor at Michigan State University and does consulting on media relations and social media. You can follow him on Twitter at @aribadler and read his blog at Here Comes Later.