Last Friday, I was one of the crazy people. I woke up early and trekked over to the Mall of America. Not to shop–but to work, and observe. In case you didn’t hear the Mall organized a fairly large Black Friday event centered squarely around QR codes. 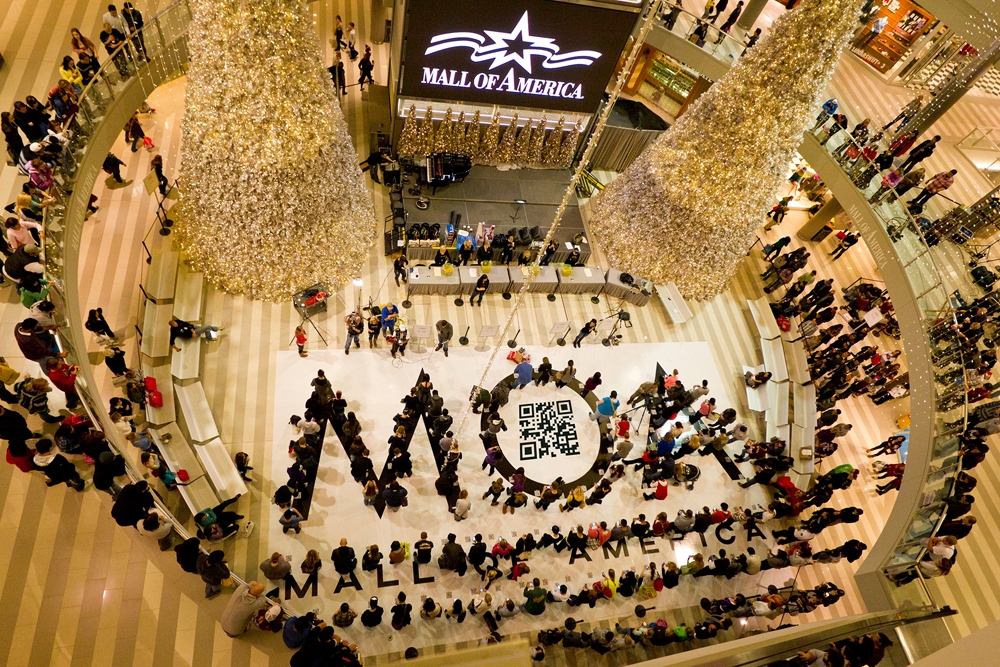 Wait, what? An event centered around QR codes you say? Aren’t they supposed to be a tool? One piece of the puzzle?

Yes–that is true. But, in this case, the Mall used the codes both as a tool AND as the focal point of the event.

Here’s how they set it up. The Mall promoted the “Snap & Win” event as the “best Black Friday deal ever” for 300 lucky guests. The Mall of America rotunda floor featured a 50 X 30-foot MOA logo made up entirely of QR codes. Those 300 pre-wrist-banded guests (selected in order in which they arrived, I believe) scanned these codes at 6 a.m., 7 a.m. and 8 a.m. to win prizes ranging from $150 gift cards to a $1,000 shopping spree (the “grand prize”). There’s also a chance for guests to win another $1,000 shopping spree from Black Friday thru Dec. 23 by snapping codes found in the food court, on digital signage around the Mall and on t-shirts worn by guest services staff.

So, I woke up at the butt-crack of dawn on Black Friday to get a glimpse of this event first-hand. Here were my immediate observations:

* Extremely well-run event. As with most Mall of America events, this one was very well run. All the i’s were dotted and all the t’s were crossed. Participants lined up in the rotunda to stand over their code, at which time they snapped it and lined up again to receive their prizes. MOA digital strategist, Lisa Grimm emceed the event and there were at least 20-plus staff on hand to assist.

* Big points for creativity. MOA knows how to make a splash. I don’t think we’ve seen anything quite like this yet. It was a very unique way to use QR codes to not only drive awareness for MOA on the biggest shopping day of the year, but also to drive traffic in-store to MOA retailers (yet to be determined as of this writing). 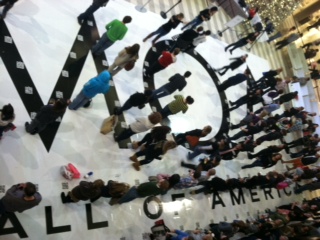 * MOA took advantage of its biggest resources. For MOA, their biggest advantages in terms of marketing are (in my view): 1) The mall space itself and the thousands of people who walk the halls each and every day, 2) Overall brand recognition, and 3) Their digital outposts (their Facebook page has 304,000-plus “likes” to date. This event took keen advantage of all three.

* They made the offer worth it. Who doesn’t want a $1,000 shopping spree during the busiest shopping weekend of the year? I mean, that’s a pretty good offer–especially for what amounted to minimal work on the part of the guest. And, the other prizes weren’t too bad either. As people scanned their codes, Grimm announced a few of the winners. Those $150 gift cards were flying  all over the place.

From what I could tell, the event was a big hit. And, the Mall folks were essentially saying as much immediately after it was finished. But, as I soaked it all in and thought about what the Mall has done here, a few key questions kept popping up:

* Did the event really drive additional traffic for retailers? Unanswered at the time of this writing, according to the Mall folks. I’m a bit skeptical here. My thought: The people who won the gift cards were really only in it for the free stuff. So yeah, they’ll go in-store and use their gift card. They may even buy a few more items. But, did OTHER people visit these stores as a result of the event? I’m not so sure. However, it should be noted that the Mall did eclipse its record for Black Friday traffic by 10,000 visitors last week. So, there’s a general Mall traffic metric baked in here, too. 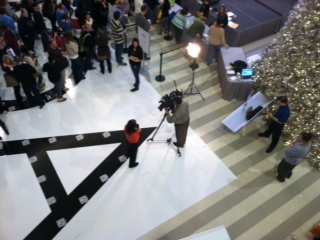 * Were people just out for free stuff? Again, I think the answer is yes. But, the bigger question is whether the free stuff was a big enough carrot to get other people in the retail stores around the Mall (not just the people who won the free stuff). If the event can’t drive additional store traffic, I’m really not sure you can call it a huge success from a business point of view. That said, the Mall says it has 1,000 people already signed up for the “Win $1,000” campaign now thru Dec. 23, so again, from an awareness point of view, the campaign/event seems to already be a success.

* Was it worth the investment in time and resources for MOA? According to Grimm, the event had 18 people working on this event on Black Friday (mostly full-time MOA staff who work on things like this regularly). But, it was the pre-event work that racked up the hours. 120 (roughly) in total, according to Grimm. That’s a big (although not huge) number. Assume a blended agency-type rate of $150 (which might be a bit low depending on what level of employees we’re talking about) and you’re looking at $18,000 just for “man-hours.” And, according to Grimm, the physical investment was under $20,000. So, all told you’re probably looking at around $35-40,000 all told with materials and time. That’s no small number. But without key metrics at this point, it’s hard to say if it was worth it or not. This one’s still incomplete.

* Will the Mall achieve its goals with this event? According to Grimm, MOA had three goals with this event. 1) Drive traffic and sales to Mall retailers. 2) Generate $500,000 in earned media value. And 3) Drive awareness for QR codes and how to use them. I think #1 is still up in the air, as we’ve discussed. But the fact that the Mall already has 1,000 people signed up for the “Win $1,000” campaign that runs from now thru Dec. 23 bodes well. I’m also guessing they may hit #2. I noticed a number of media outlets at the event and noticed a few pickups that day. Not sure the third goal really makes sense though. I mean, driving awareness for QR codes is fine and all, but is it really a business goal? I’m not so sure about that one. Feels more like a by-product of the process (and one I’m not even sure I’d be worrying about). 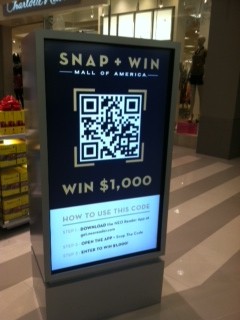 All in all, a pretty creative execution and an interesting way to inject technology into one of the biggest shopping days of the year at the Mall. As with most QR code campaigns, I’m a bit skeptical on the business value of this event, but time will tell on that front, and the Mall may very well achieve its business goals. The early returns were pretty good–a 10,000 increase in Black Friday visitors year-over-year (although you certainly can’t attribute all those folks to the event) and 1,000 people already signed up for the “Win $1,000” extension of this event.

What do you think? Was this a successful event for the Mall of America? Or, was it another attempt to use a new technology for the sake of using a new technology? Curious to hear what you think about this one.

Disclaimer: The Mall of America is a former (but not current) client of ACH Communications.