Is the press release *really* dead? 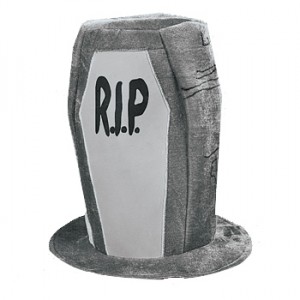 According to Forbes reporter and blogger, Aaron Perlut, the answer to that seemingly ever-present question is “yes.” He even says so in the very first line of his recent post on Forbes.com: “News releases, in most cases, are a worthless bother.”

Perlut goes on: “The traditional news release is a dreadful animal–read by few–and should be put out of its misery.”

Pretty strong words, right? A shot across the bow of the entire PR industry.

But, as you continue to read Aaron’s post, he makes a couple valid points, including:

* “I receive at least 10 relatively illegible news releases daily (and many reporters tell me they get up to 300 each day). And rarely, if ever, can I get past the subject line in my e-mail inbox.” — I don’t doubt this for a minute.

* “In most cases, companies are still writing for their CEOs, not their audience. If they really consider it, they should write for them, not at them.” — Quote from Jason Kintzler in the story, and a really good one (bringing up a topic we don’t talk about all that often).

Both great points and both correct in their own respects.

Except, here’s the thing. I’m not sure it means the press release is *really* dead.

I respect Perlut. I’ve never met the guy. I don’t read his column/posts that often. But he’s a writer at Forbes. You don’t get that of  job by accident. But keep in mind, he’s just one journalist. And he offered up no research or empircal evidence (other than his inbox numbers) to back up his claim. It’s merely his opinion. And he’s certainly entitled to it.

And, let’s be honest, this isn’t the first time we’ve heard a journalist complain about news releases. Heck, that simple concept spawned a cottage industry with the launch of HARO (also noted in Perlut’s post).

This doesn’t mean PR folks are off the hook, either. Perlut’s claim about poorly written news releases rings true. We’ve all seen them. Heck, read the Bad Pitch Blog for a few weeks–you’ll see them. We just have to be more concise. Smarter. More compelling in our writing. And, make every effort to cut through the insidious, and pervasive, corporate jargon.

Not too tough, right?

The other factor that leads me to believe the press release is nowhere near dead just yet: Other journalists have told me. Yes, actual journalists who work at real news outlets.

Here’s just a few of the DMs I’ve received from journalists the last few days after I asked them “is the press release dead?”:

* Gregg Litman, senior producer-news/sports, WCCO-TV. “No. Distribution methods may change, but we still need information/text to save, forward in office, give to reporters, & use as a reference.”

* Dave Schwartz, sports reporter, KARE-11: “For sports, news releases are alive and well. We rely on them heavily for team news and events. Also PR firms use them to let us know about stories.”

And, finally, this tweet from WCCO-TV’s Jason DeRusha last week: 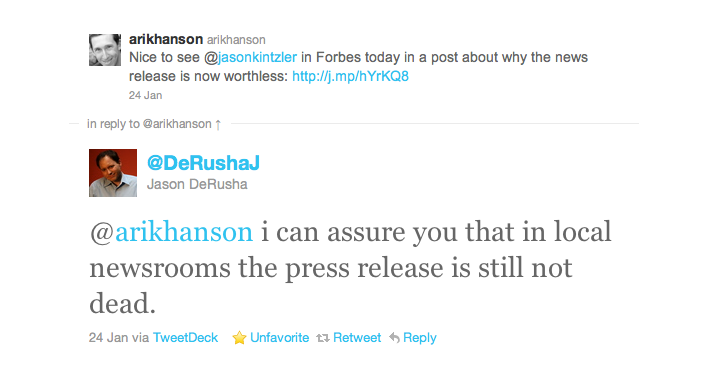 So, given those debates an claims, what do you think? Is the press release *really* dead? Or, have tales of its demise been greatly exagerrated?