Is LinkedIn slowly eroding its own platform?

Earlier this week, LinkedIn users started receiving emails like this: 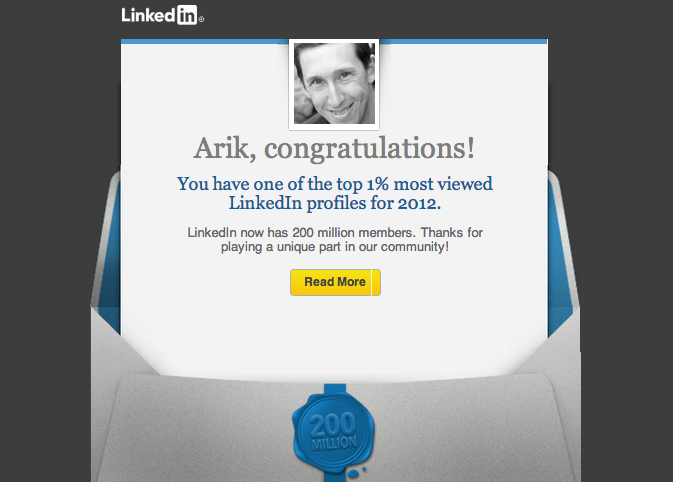 Feels pretty good, right? I’m in the top 1 percent! Others received emails stating they were in the top 5 percent. 10 percent, even. All in an effort to recognize the platforms more engaged and prolific users.

As this Mashable post points out, it’s an obvious ploy at one of our most base needs–the need to feel important. To feel elite. To feel like we’re in the 1 percent.

And judging from the dearth of posts yesterday on Facebook, Twitter and Instagram, I’d say LinkedIn made out pretty well here from a short-term awareness/buzz perspective.

But, outside of ego massaging 20 million LinkedIn users, what really happened here? What did LinkedIn really achieve? And, does it really provide long-term value to these top users and the platform itself?

As Danny Brown says in this post, the “1 percent” claim comes off a little hollow. And definitely raises a few questions.

There was also a lot of blowback online yesterday around these emails. People saying they found them “smarmy” and even “spammy.” Now, I tend to think a lot of the folks saying that are people who work in our industry. People who have their radar up for this type of stuff.

Take a look at Mark Schaefer’s post from yesterday: 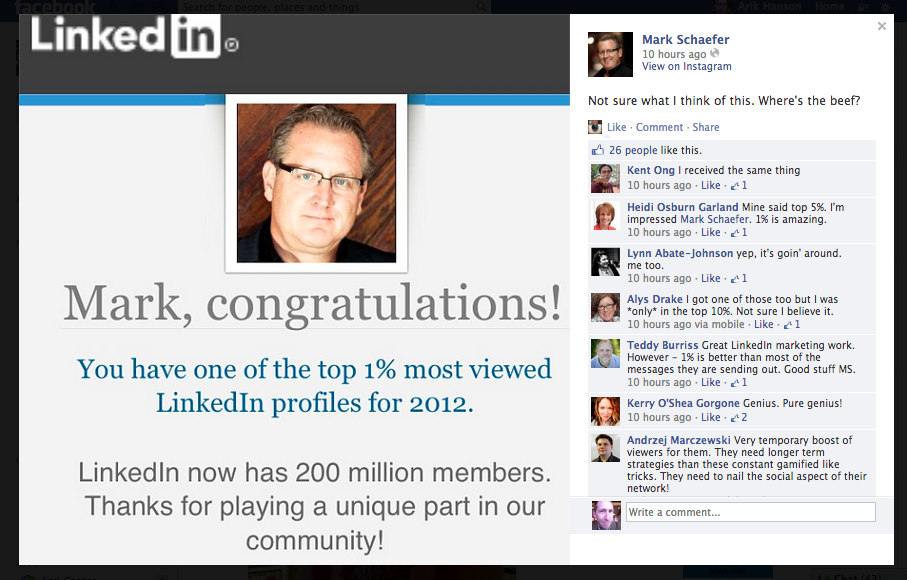 I know you can’t read the comments, but there were more than a few that weren’t exactly enthralled with the email. Not so much that it was spammy–but more about the lack of value the email and data provided.

And, that’s what this all comes down to in the end. What kind of value is LinkedIn creating for its users with this kind of note? Answer: Not much.

What’s more, take a step back for a moment and look at some of the more recent changes to LinkedIn and you start to see an ugly pattern emerging.

Is LinkedIn slowly eroding its own platform?

Look at their recent “endorsements” rollout. Another “hollow” tool designed to spur clicks and engagement, but really what do these endorsements really provide users? I don’t know about you, but there have been many people who have endorsed me for “media relations” or “social media marketing” over the last several months. People who have not worked with me. People who probably know little about my background (outside of what LinkedIn tells them). But, people who probably ready my blog and interact with me on Twitter, Facebook or Instagram. And while I really appreciate the endorsements, you can’t help but wonder if they really mean anything to employers and others who view your profile. Are they really a valued “social signal”?

Or, what about when LinkedIn rolled out the ability to follow “thought leaders” on the platform in Oct. 2012? You can follow such luminaries as Tony Robbins, Mitt Romney and T. Boone Pickens. It’s a nice idea, but it lacks relevance. Wouldn’t it be great if LinkedIn curated thought leaders by INDUSTRY and served those up to us instead of giving us a swath of general business and industry thought leaders? Instead, we get more irrelevance–posts and shares from the likes of David Cameron, Jim Kim and James Caan (no not that James Caan, the other one; oh, you don’t know the other one? Huh). Again, adding little value for most.

You see where I’m going with this. Many of LinkedIn’s recent “enhancements” or “benefits” haven’t really been enhancements or benefits at all–at least not from a user perspective. In fact, they’ve been turning people off to the platform. And, keep in mind, LinkedIn was and still is widely regarded as THE professional social network of choice (for now).

There are tens of thousands of people (educated guess) who interact and have a profile on LinkedIn that don’t show up ANYWHERE ELSE on the Web. This is the one place these business folks come to interact an get information about companies and people.

But, if LinkedIn keeps rolling out “enhancements” like these, and emails touting that you’re in the top 1 percent of all profiles viewed, well, I have a feeling their credibility might take a hit (and for many, it already has).

So, I ask you: Is LinkedIn slowly eroding its own platform? What do you think?