By now, many of you have probably read the LeBron James letter in Sports Illustrated last week.

I know there have been the requisite “What we can learn about X from LeBron James’ Sports Illustrated post” posts already.

But, as I read the piece, I kept thinking of a different angle. A corporate communications angle. 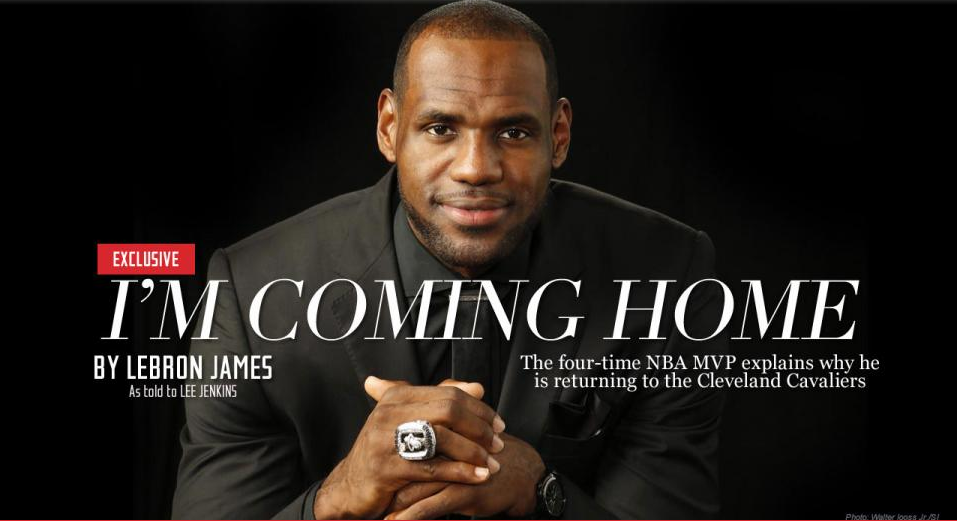 Think about it this way. For the Cleveland Cavaliers, which is a business, this move signifies tremendous change for the organization. In essence, this is the equivalent of a Fortune 500 company announcing a new CEO. It’s that big.

So, huge change for the Cavs. This decision impacts everyone from Dan Gilbert (and his pocketbook) to the folks who take ticket orders (the Cavs sold out of season tickets in just eight hours last week!).

As you read the letter, think about a message like this from your CEO. That’s kinda how I looked at this–even though I know LeBron is not the owner or CEO of the Cleveland Cavaliers. At least not yet 🙂

But if you read the letter through that lens, you’ll notice some pretty interesting commonalities with corporate communications practices.

And, you’ll note that “King James” did a lot of things right from a change comms point of view.

Successful leaders are great at creating emotional connections with their employees. LeBron does this right out of the gate as he talks about growing up in NE Ohio. Also, using phrases like “holds a special place in my heart” and “It’s where I cried. It’s where I bled.” Leading this way was not accidental. LBJ was building (or re-building, really) an emotional connection with the Cavs fans, employees and players he so rudely jilted four years ago. 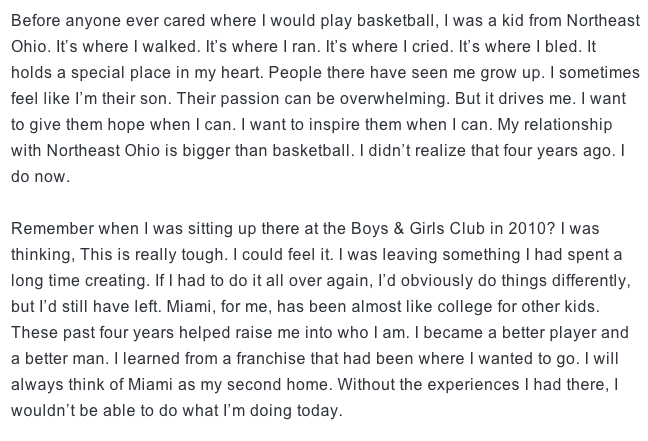 This is where most execs struggle. They’re so focused on “the message” they forget to just speak like a human being! Specifically, this sentence meant a lot: “If I had to do it all over again, I’d obviously do things differently, but I still would have left.” In essence, this is LJB apologizing to the fans of C-town. But notice he still said he’d leave. He apologized for the WAY he did it–not for the act itself. Extremely honest. And extremely human. Something that certainly did NOT come off the first time he made an announcement like this (um, Jim Gray anyone?).

Be thankful–and use specific names

Being thankful and recognizing employees is one of those tips you hear a lot in the corp comms world. But, what most execs forget is not simply to thank the people/employees who help them out along the way–it’s to actually NAME NAMES! Again, LBJ does well here. He goes out of his way to thank the Miami Heat. But, he also names specific players–Wade, Bosh, Haslem and Mario Chalmers. He didn’t have to do that–but he did. Execs could learn a thing or two here–don’t just thank employees. Thank SPECIFIC employees!

Another area where LBJ excelled. A few times in the letter, he sought to inspire. “…what’s most important to me is bringing a trophy back to Northeast Ohio” for starters. But, he follows that up a little later by saying, “I’m not promising a championship. I know how hard that is going to be to deliver. We’re not ready right now.” Perfect. Inspire, but set realistic expectations. This way, if somehow LBJ DOES get Cleveland to the NBA Finals next year (which is a serious possibility) it will be considered a huge win. His goal is clearly to win championships, but he’s also realistic about the timetable. Executives sometimes get caught up in the “inspiration” phase–trying to motivate employees to achieve goals that are often, to be honest, unrealistic. I tend to think employees would appreciate this “inspire with realistic expectations” approach better. Feels more honest to me.

Lay out your vision

This is an area where CEOs specialize–the vision. LBJ’s “vision” consisted of talking exactly what he’s planning to do, and what he’s looking forward to. Specifically, being more of a senior leader on this team and mentoring some of the NBA’s bright young stars, including Kyrie Irving. Again, love that he called out specific teammates by name (but did NOT call out Andrew Wigggins–conspiracy alert Wolves fans! :). 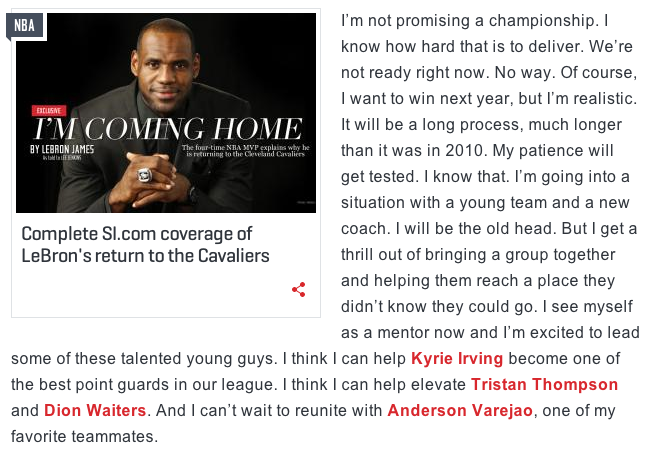 Believe in a higher cause–and get your employees to believe in that cause, too

Those organizations with a higher calling tend to have a easier time rallying employees than those just trying to sell widgets. Think of the difference between tech giants like Apple and Samsung. Samsung makes phones. Apple improves people’s lives. There’s a big difference–which, in part, is why Apple is one of the most successful companies in the world. In LBJ’s case, his higher cause is Northeast Ohio–and kids. He closes his message by talking about his “higher calling.” Case in point: “But this is not about the roster or the organization. I feel my calling her goes above basketball.” What is your organization’s higher calling? What do you stand for? And how do your executives rally the troops in the context of that higher calling? That’s an area where executive leaders could improve, too.